In Old Oklahoma aka War of the Wildcats (Republic, 1943)

In Old Oklahoma, re-released as War of the Wildcats, is a wartime John Wayne Western, one of the several he made for Republic at that time. It was a ‘companion piece’ to In Old California the year before.
Well, I say it was a Western. It was, just about. It’s a 1906 story set during the oil boom in Oklahoma. The bad-guy tycoon Jim Gardner (Albert Dekker, excellent as always – he had also been the chief heavy In Old California) has an “autymobile”, though appropriately it breaks down, enabling Gabby Hayes as Despirit Dean to use his stagecoach to transport people about. Wayne as Dan Somers is a cowpoke back from the war in the Philippines, in 1870s duds and pistol making no concessions to the new century.
.
. 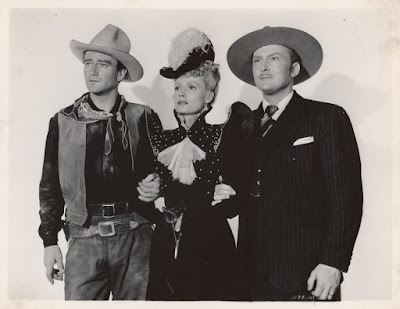 Cowboy-turned-oilman and rich tycoon, rivals for the hand of the fair Catherine
.
It’s a skullduggerous story about ruthless Gardner wanting to take over Indian lands to get his greedy hands on the oil that lies beneath them, and decent Dan and Despirit, aided by hotel owner (to put it politely) Bessie Baxter (Marjorie Rambeau, imposing) standing up for the Indians and farmers against the corporate might of the millionaire.
.
. 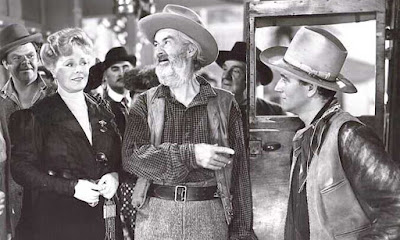 Bessie and Gabby with cowpoke Dan
.
But it’s also a rom-com, with glam author Catherine Allen (Martha Scott) falling first for rich, suave Gardner, then, when she realizes how Ruthless he is, for the honest cowboy, who just happens also to be tall and handsome.
That’s about it. Not much plot really, and what there was is rather 30s B-Western in tone, but it adds up to quite a lot of fun, and the last reel is certainly full of action.
.
. 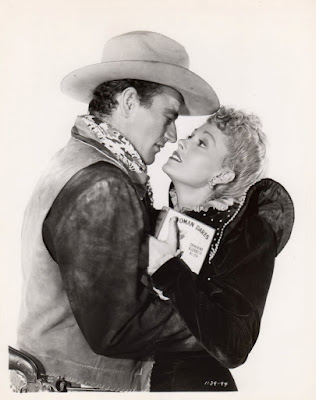 Romance
.
Dan was also in Cuba before the Philippines, where he palled up with Teddy Roosevelt (Sidney Blackmer), who is now in the White House, which comes in handy when he decides to beat Gardner at his own game and himself extract the oil from the Indian territory, splitting the proceeds 50/50 with Chief Big Tree and his (unspecified) tribe. He gets the concession and it’s war to the knife between the old tycoon and the new one.
Wayne buddy Grant Withers is the oilman who helps him. Other Wayne pal Paul Fix is the evil Gardner henchman Cherokee who pretends to like Dan but then sabotages his oil rig with dynamite. Dale Evans has a part, as the saloon gal Cuddles with long legs (no sign of Roy yet). You can also spot Lane Chandler and Irving Bacon in small parts, and I swear the doc was Will Wright. Yak Canutt did the stunts and is a brawler. You can have quite a lot of fun character actor-spotting.
.
. 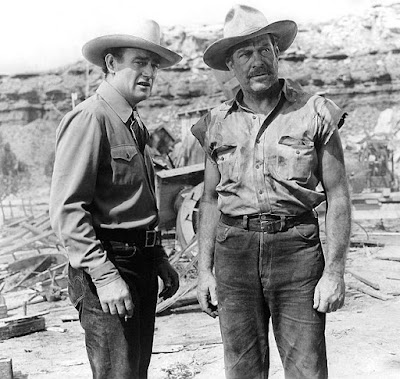 Grant is the oilman who helps Duke
.
There’s a song crooned by the oilmen out on the prairie conducted by Gabby. There’s much dashing hither and, naturally, thither. And it all ends with a thrilling climax as the good guys run wagons full of oil through a prairie fire set by Gardner’s men, in order to get to Tulsa before the deadline. Of course there are final fisticuffs between Gardner and Dan, and no prizes for guessing who wins that bout.
It’s light, entertaining and well handled by director Albert S Rogell, who had helmed Westerns since 1921, put out wagonloads of Fred Thomson, Jack Hoxie and Ken Maynard oaters and would still be directing Broken Arrow episodes on TV into the late 1950s.
.
. 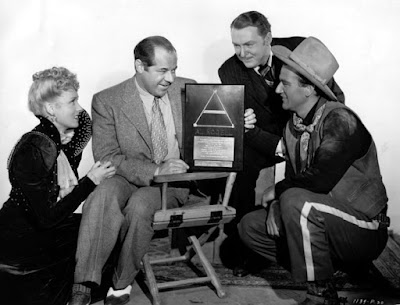