Rory Calhoun is best known to us Westernistas for his big-screen oaters, and very good many of them were too. But he also figured prominently on the small screen (and they were small in those days, weren’t they), most notably of course as Bill Longley in The Texan, which ran for two seasons, 1958 – 60, on CBS. Of course he was a very fictional Bill Longley and he didn’t murder anyone, just roamed the West helping out poor widows and children and being kind to animals, you know how they did.

But Rory also guested on other Western TV shows. He was in episodes of Wagon Train, Death Valley Days, The Virginian, Bonanza, Gunsmoke, Rawhide, Lancer, Alias Smith & Jones and Hec Ramsey. Today we’ll watch two other TV shows he did, a Zane Grey Theatre in 1956 and, later, a 1967 episode of Custer.

Dick Powell’s Zane Grey Theatre was, as you probably know, a Western series which ran on CBS from 1956 to 1961. It had many distinguished guest stars in different episodes and Season 1, Episode 12, first aired in December 1956, featured our friend Rory. 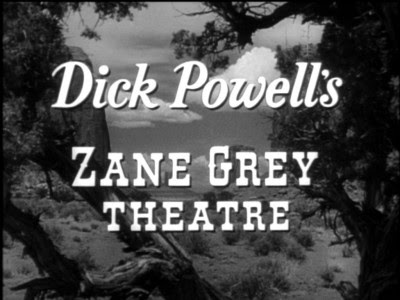 .
After the usual slightly flippant intro by Dick Powell, we see Mason Ward (Calhoun), a no longer practicing lawyer from Kentucky but now in Wyoming, apparently bitter from the Civil War, being given a job as schoolteacher by the mayor (Parly Baer). One of his new pupils is obsessed with finding gold. Though everyone scoffs at the boy’s dream, he does in fact find nuggets but he is apparently exploited by his new teacher, who takes and keeps the gold in return for a few small items the naïve boy (Bobby Clark) wants to give as presents to kind neighbors. 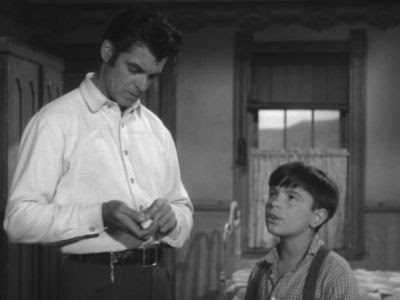 .
The local townsfolk (including local lawman Denver Pyle) find out. They won’t listen to Ward’s proffered explanation and they all jump to conclusions about the teacher’s guilt, and go gold-crazy. There is, though, an explanation, which is revealed in the last couple of minutes of the half-hour show.

It was written by Aaron Spelling and it is a pretty straightforward moral tale about how wealth can corrupt but innocence prevail.


It was not a usual Western role for Calhoun, who has no gun and wears a suit. But he acquits himself well, suggesting his character’s unhappy past and doubts about any brighter future.

It’s an inconsequential affair but well handled. You can watch it on YouTube if you want, here.

More than a decade later he had aged (he was 45) but he was one of those lucky men who ages well and in the 1967 episode of Custer, titled Blazing Arrows, he looks incredibly like George Clooney. So Rory and I have that in common.

Custer wasn’t my favorite show, I must admit, and this one was missing Slim Pickens so that didn’t help. Wayne Maunder didn’t quite cut it as Custer for me. Still, this was quite a good episode because it featured Rory as the leader of Fredonia – no, not the 1820s breakaway republic but a fictional valley that set itself up as independent right after the Civil War. The men wear Reb uniforms and drill all the time and several of them don’t quite seem to have understood that the war’s over, especially the half-crazed Sergeant Carhew (Adam Williams) who wants to shoot anything in a blue uniform or a feathered bonnet. 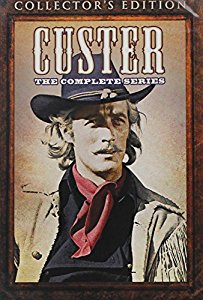 .
Captain Rory is noble and valiant, of course. When Carhew kills a young Crow brave, Rory prepares for an attack by Brave Dog (Rodd Redwing) and his massed warriors. Naturally, despite Fredonian antipathy, Custer rides in to help, and the veterans fight side by side, rather like Rock and Duke in The Undefeated or Charlton and Richard in Major Dundee.

There’s also a nasty railroad man (railroad men had to be nasty and grasping) whom no one likes. He’s played by Stacy Harris. He wants to run his tracks right through Fredonia and damn the consequences. 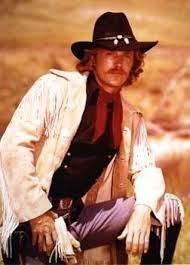 .
It’s quite actionful, I suppose. Rory looks distinguished. It all ends in too pat a way as the Indians are defeated, Capt. Rory suddenly sees the error of his ways, brings Fredonia back into the USA and glibly assures everyone that they will all be prosperous now.
You can watch this one on YouTube too, if you want, here.
.
.
We might look at Rory’s episodes of Wagon Train another day but for, that’s all, e-folks!
PrevPreviousThe Pony Express (Paramount, 1925)
NextFort Vengeance (AA, 1953)Next