A major revelation coming up, so brace yourself. All my life I have disliked Barbara Stanwyck in Westerns. She was a most unlikely Annie Oakley, barely credible as a chirpy colleen in Union Pacific (with Joel McCrea) and really bad in the 1947 tawdry pot-boiler California. True, she was impressive in Anthony Mann’s The Furies, but The Moonlighter? Cattle Queen of Montana? The Violent Men? Oh, please. The Maverick Queen was even worse and as for Forty Guns, well, words fail me to describe its trashiness. No, she was entirely unsuited to the genre – yet she would insist on doing Westerns. I only watched Trooper Hook because it was a Joel McCrea Western, and, well, you gotta.
However, and it’s a really big however (this is where you need to brace yourself), in Trooper Hook Barbara Stanwyck is seriously good.
.
.
.
Yes, I knew you’d be amazed.
.
.

Actually, though it was hardly a Western at all, she was also powerful with McCrea in The Great Man’s Lady in 1942, so I guess I gotta give her (grudging) credit. She was 50 in 1957 and roles were starting to dry up a bit. Playing a young mother in this one was a bit of a stretch but she carries it off. After all, in The Great Man’s Lady she had played a hundred-year-old woman and a giddy teenager in the same picture. Respect. 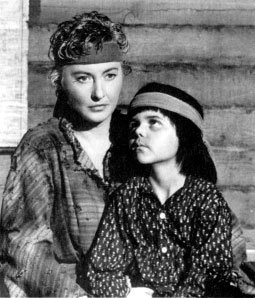 Stanwyck unusually good
.
Trooper Hook was produced by one Sol Baer Fielding, his only Western (he only produced five films altogether). It is a low-budget 81-minute black & white picture released in the year of major commercial color Westerns such as Paramount’s Gunfight at the OK Corral and Fox’s The True Story of Jesse James, and it was in many ways completely overshadowed. Most of the potential viewers probably stayed at home to watch Gunsmoke on TV. But ’57 was also the year of Columbia’s really fine black & white 3:10 to Yuma, and Trooper Hook can justly be compared with that Delmer Daves picture.
I have always thought Joel McCrea one of the best ever Western actors. He was so steady, somehow. Quiet, taciturn, a splendid rider, he always came across as the decent cowpoke doing what a man’s gotta do. Trooper Hook (actually, he’s Sergeant Hook) is no exception. McCrea made four Westerns in 1957, quite a record: The Oklahoman was released in May, Trooper Hook in July, Gunsight Ridge in September and The Tall Stranger in November. True, these were mostly minor/mid-budget Westerns, and McCrea had earlier starred in major A-pictures such as Paramount’s Wells Fargo and the Cecil B DeMille-directed Union Pacific. He was Buffalo Bill for William A Wellman at Fox. But being late 50s ‘smaller’ pictures didn’t detract from the quality. In fact Trooper Hook reminds me quite a lot of an absolutely superb black & white oater McCrea made in 1948, Four Faces West. Both pictures have small casts and budgets but are thoughtful, intelligent and yes, rather charming films.
.
. 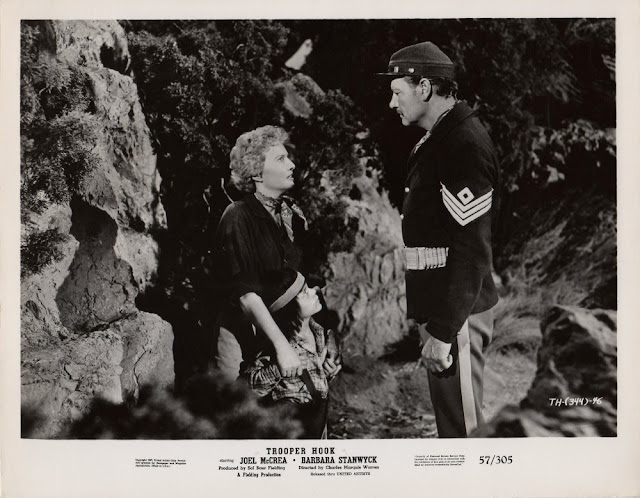 Stern and steely soldier McCrea
.
Trooper Hook is notionally a cavalry/Apache story, with Rodolfo Acosta, always good, billed as Rudolfo Acosta, as the (fictional) fearsome Chiricahua war chief Nanchez. In the first reel he smilingly orders the execution of some cornered troopers, thus earning his ‘fearsome’ credentials. But another troop, commanded by Sergeant Hook, captures him. Hook’s men find that a white woman is among the captives, and this is Nanchez’s wife (Stanwyck), with their young son (Terry Lawrence). The woman is silent (that must have been hard for Ms Stanwyck) but to be fair she plays the white woman ‘hardened’ to Apache life with restraint and skill. And she also manages very well the gradual re-integration into ‘civilized’ society of a formerly respectable married woman. Honestly, it’s really well handled.

This story was the basis of The Searchers the year before and Two Rode Together in ’61. Come to think about it, what might those pictures have been if John Ford had used Stanwyck? Mmmm. 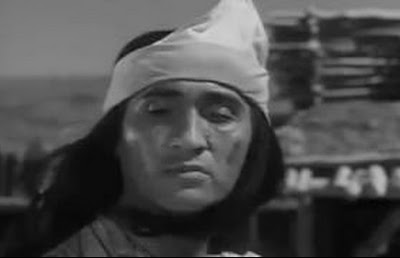 Acosta excellent
.
Sgt. Hook is charged with taking the woman and child by stage down to Tucson where her white husband is waiting. Some good news: the crusty old stage driver, a Buffalo Bill lookalike, is Royal Dano, in a splendid performance. And the husband waiting in Tucson is John Dehner, who was never less than excellent in Westerns.
.
. 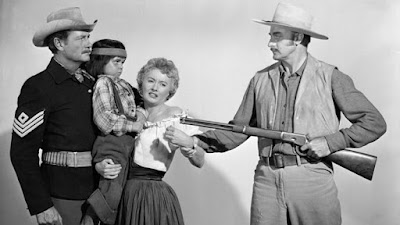 A very posed shot but Dehner reliably good – though his part is too short
.
TV writers David Victor and Herbert Little Jr, with Martin Berkeley, who had worked on The Nebraskan and would do Red Sundown, wrote the screenplay from a story by Jack Schaefer, no less, and it must be said it’s well done. There are some great lines. Also contributing to the script was the director, Charles Marquis Warren. Warren was a novelist and magazine-story writer who worked for MGM in the 30s. Many of his stories had been made into movies, Streets of Laredo, Only the Valiant, Little Big Horn, Hellgate and Springfield Rifle, to name but a few. He directed a bit too, and wasn’t bad. He certainlyunderstood the Western.
.
. 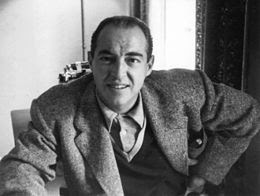 Charles Marquis Warren
.
On the journey they pick up various other passengers, including a sympathetic and decent young cowhand, Jeff, very well played by third-billed Earl Holliman, born in 1928 and still going strong, as far as I know. He was the ‘good’ son in Broken Lance and Charlie Bassett in Gunfight at the OK Corral, and later he was one of the Elder boys (Duke’s young brother) in The Sons of Katie Elder.
.
. 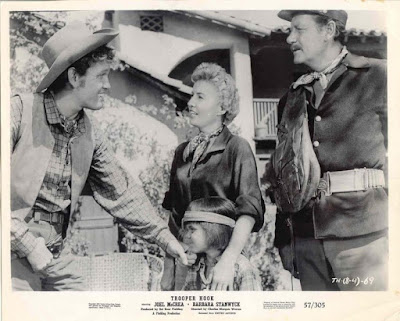 Holliman winning as sympathetic cowpoke
.
The picture has a worthy anti-discrimination/bigotry agenda and reminds us a little (but only a little) of Devil’s Doorway in that regard. I liked Sheb Wooley as leader of the bullies who abuse the “squaw” and her child – of course Hook knocks him to the floor with a mighty punch.
Well, Nanchez escapes from custody (there’s a great shot of his broken manacles as he stands on a ridge gazing at the stage; we don’t see his head but we immediately understand it is Nanchez, free) and of course he follows the stagecoach to recover his son (he doesn’t seem to care about his wife). But Sgt. Hook has his orders, to take wife and son to Tucson, and remember, a man’s gotta do…
Gradually, as we knew would happen, on the journey Hook and Mrs Sutcliff (that was her white name; we never learn her Chiricahua one) warm to each other, and Hook bonds with the little boy. Yup, they are becoming a family unit alright. They had probably seen Hondo and The Tin Star. Luckily, husband Dehner is unwilling to accept the ‘redskin’ child and he perishes in an overly convenient ending in which he kills Nanchez and Nanchez kills him right back, enabling the new family threesome to go off to California, probably, to start a new life, you know how they do.
The DP was Ellsworth Fredericks, the Invasion of the Body Snatchers cinematographer who had worked on They Died With Their Boots On as well as the André De Toth/Randolph Scott Western Carson City, so he knew a thing or two. The bleak and arid Mojave Desert locations the stage crosses to get to Tucson are appropriately hostile for the tale, and beautifully shot in a luminous monochrome (the fort scenes are shot at Kanab, Utah, predictably). It’s released in MGM’s Limited Edition Collection and is a good-looker.
Of course there are plenty of sound-stage studio shots, notably of the three-sided stagecoach which enables us all to get a good view of the occupants without crowding the cameraman in there too. The actors must have felt a bit silly delivering their lines while some prop boy rocked the stationary coach on its springs but they were pros. McCrea especially manages to be completely convincing as the stern soldier grimly carrying out his duty. At one point he interestingly says, “Duty means a lot of things…usually means looking things square in the face and forgettin’ the rules and regulations.”
.
. 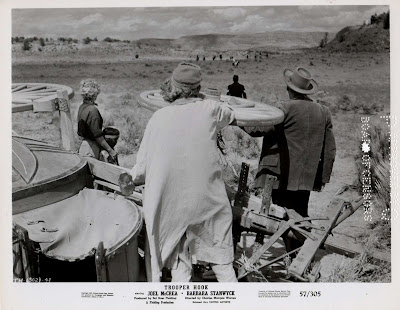 That’s stage driver Royal Dano’s back we see
.
The relationship between Hook and Nanchez is very subtly done. Hook finds Nanchez a cruel killer but at the same time he understands him. Nanchez says to him, “My people have long called you ‘Face of Stone.’ They were wrong. Your name should be ‘Heart of Stone,'” to which Hook replies, “I do what must be done.” This makes Nanchez smile wryly and he says, “You are more Indian than you know,” to which Hook grimly responds, “I taught myself to think like my enemy.”

It was the last of McCrea’s Westerns with Stanwyck. He paid this tribute to her: “She was, with no reservations, the best I ever met. Every crew we ever worked with loved and admired her and so did I. She taught me a lot and I shall be ever grateful to her.”

I really like this movie. It’s no big A-picture but it’s a very classy Western with considerable merit.