Cagney with a Colt, not a machine gun

Nicholas Ray (1911 – 79), pictured left, directed this VistaVision Technicolor offering from Paramount, and the picture enjoyed some great Colorado locations in the shape of the Silverton and Durango area and its great rail line through the gorge. It was written by Winston Miller, of My Darling Clementine fame, and the art direction was by the great Henry Bumstead. Furthermore, there was a strong cast of character actors backing up the principals: Jack Lambert, Ray Teal, Ernest Borgnine, Denver Pyle, Trevor Bardette and Irving Bacon. There was clearly therefore talent on the set, in front of and behind the camera, and there was budget for it too.
So we are in for a really good Western, right?
Nope. Not really. It suffered from two major weaknesses: firstly, the lead actors, and secondly, the picture had very little to say – there was no message particularly and the whole plot seemed vin ordinaire – just another Western.
This was the third of Nicholas Ray’s four oaters (I don’t count Circus World as a Western). Ray is often thought of as a genius and certainly The Lusty Men (1952) and Johnny Guitar (1954) were interesting and unusual movies. His last, Fox’s mainstream The True Story of Jesse James (1957) was so altered by the studio as to make it hardly Ray’s work at all. This one, though, seems, well, just rather ordinary. You would certainly not have known it was a Nicholas Ray picture if you hadn’t read his name on the credits. It’s competently directed – though at 93 minutes probably a bit long – but nothing more. 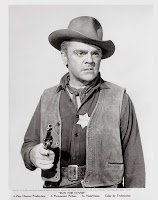 We all like James Cagney (right) in a tux holding a tommy gun in a Chicago speakeasy. And after all, he won an Oscar and was nominated for two more. But on a horse? He was a rotten rider, for one thing. His whole demeanor – and diction – just didn’t suit the Western. He did three (we can’t count his narration of Arizona Bushwhackers). Most famously he was The Oklahoma Kid in the amateurish Warners picture which had the equally unconvincing Humphrey Bogart as the baddy in black. The year after Run for Cover he would do the Robert Wise-directed Tribute to a Bad Man for MGM, which was certainly the best Western he did but even there he was a rather pale stand-in for Spencer Tracy. And that was all she wrote. Despite the similarities between the gangster movie and the Western (they’re both Amercian-hard-boiled, after all) the stars didn’t always succeed at both genres. 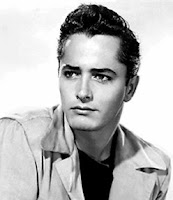 In the first reel he meets up with a twenty-year-old played by John Derek (left), who was in fact 29. Derek, who would be both Mr Ursula Andress and Mr Bo Derek for a time, produced movies as well as acting in them (he won a RAZZIE Award for Worst Achievements in Film for his direction of Tarzan the Ape Man) and was a photographer (he snapped three quarters of his wives for Playboy), and was also an editor, writer and cinematographer. So pretty well a Jack of all Hollywood trades. As a Western lead or second lead, though, he was only so-so. Watch him in The Outcast, say, or Ambush at Tomahawk Gap and you’ll see what I mean. He didn’t do that many big-screen oaters. Mostly he did Frontier Circus on TV.
The idea in Run for Cover is that Matt Dow (Cagney) is an old hand, good with a gun and a man who knows the West, while Davey Bishop (Derek) is a green kid who hovers on the brink of being a no-good. He doesn’t hover long, though. He is pretty well a skunk, despite Cagney’s avuncular care.
There’s an implausible plot in which an express man throws a bag of money out at their feet as the train passes because he thinks they are robbers and doesn’t want to get hurt (again). Davey toys with keeping it but Matt is firm: they will take it into town and hand it in. But in Madison (clearly Silverton, but they call it Madison) the train man has cooked up a story to explain his actions and so Sheriff Ray Teal leads a posse which includes townsmen Jack Lambert and Denver Pyle, to capture the ferocious outlaws. If there is a message to the movie it is that people are too quick to jump to conclusions and judge others without evidence. While undoubtedly true, it must be said that a good percentage of Westerns rely on this notion, and indeed the posse opens fire without warning on the two men, grievously wounding one, and Jack Lambert immediately wants to string the other up from a nearby oak tree. Standard practice for Westerns, of course.
.
. 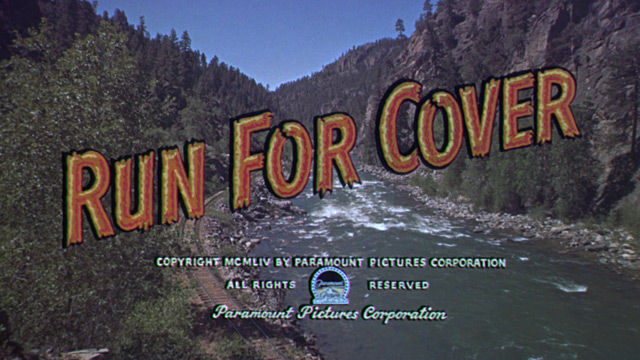 Technicolor VistaVision, but still a bit ‘B’
.
Matt talks his way out of it, showing up Sheriff Teal, who looks ashamed and loses the next election, opening up the job for Matt to take – at a thousand a year plus fines. He makes Davey his deputy, to make a man outa him. Mistake.
Davey has recovered from his wounds because he is nursed by Matt and Helga, a Swedish farmer’s daughter (Viveca Lindfors – at least they cast a Swede). You might expect Helga to get sweet on the boy but nay, it is Matt she falls for (despite the more than two decades gap in their ages). The best bit about this part of the plot is Helga’s dad, Mr Swenson, very well played by Jean Hersholt in his last picture (he died the following year), actually a Dane but hell, Danish, Swedish, they’re all Scandinavian, ain’t they? He had been in silent Westerns, including Hell’s Hinges, back in the day. I just loved his bulky, stoic, even flinty farmer, a persona which hides a very shrewd man. I wonder if Hersholt had seen Edgar Buchanan’s Fred Lewis in Shane…
One good bit: when he takes the lawman’s job Matt slips a rolled banknote into one of the cartridge chambers of his Colt. He says old lawmen do this so they always have money for a funeral on them. A nice touch.
.
. 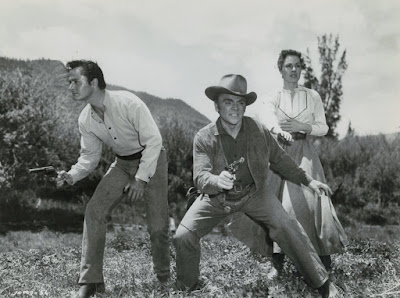 Posed? Nous?
.
Well, everything settles down and sheriff and deputy have little to do. Matt whittles, in the best Destry tradition. In fact he whittles a toy for a small town boy, clearly thereby establishing his goody credentials. But one day there is a bank robbery. One robber is wounded and Matt leaves Deputy Davey in charge while he chases the other, Ernest Borgnine. Of course he brings Ernest in but when he gets back to town he finds that weak Deputy Dave has failed to stop the townsmen from lynching the other bandit. And Matt sure hates lynch mobs. In fact he arrests them all in the saloon, and they get a severe punishment from the local judge: a ten dollar fine each, for disturbing the peace.
There’s a pretty cringeworthy church service at Easter with children singing badly, a clumsy proposal by Cagney is accepted by the Swede (actually, she kinda pre-empts it) an action climax follows in which the bad guys are – oh, hell, you know how it turns out, even before you’ve watched it.
Now, I’m not saying all this is bad, exactly. It’s not bad. It’s just not all that good. 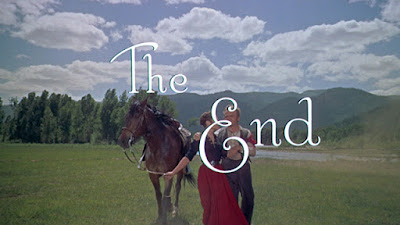