While reviewing Prairie Fever recently I said I admired Lance Henriksen as Western actor, and kind reader Boppa left a comment recommending another of Henriksen’s oaters, Gunfighter’s Moon, also a TV/straight-to-video offering. Monsieur Boppa warned that the YouTube transfer was a poor one but I saw it anyway. Actually, I have seen much worse on YouTube and the picture is watchable. Henriksen is the lead and is excellent as aging but still tough gunfighter Frank Morgan.
.
. 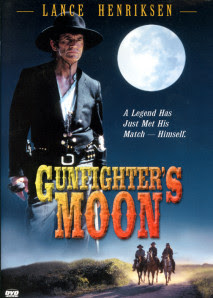 Not at all bad
.
Director/writer Larry Ferguson, of The Hunt for Red October, Alien 3 and Highlander fame (not Westerns, sadly, but we forgive him), clearly knew that gunfighter good/bad heroes can choose from a permutation of first and last names in Westerns: Morgan, Virgil, Clay, Frank, Cole, Wes and a few more. They suggest outlaws, Earpish lawmen and guys good with a gun. Ferguson went for Frank Morgan, which is fine as a portmanteau name. Robert B Parker went for Virgil Cole in Appaloosa et seq. You will find many Westerns with heroes using other combinations. Perhaps Frank Morgan was Swifty’s brother, from Support Your Local Gunfighter. Hey, he could have even been Swifty!
.
.

Swifty Morgan rides again
.
Lance is really good in the part, though. Though he will never better his cannibal gunman Cole Wilson in Dead Man, he is still pretty damn tough in a world-weary kinda way as that classic figure, The gunslinger condemned to draw on every punk kid wanting to make a name for himself. The Gunfighter in 1950, with Gregory Peck as Ringo, was probably the supreme example but it’s a very well-known Western trope and you can doubtless think of many other cases. Mr Henriksen looked craggy in the ‘90s. I think craggy is the word. In a sort of Peter Fonda-ish way. And he delivers menace, intelligence, regret and steely determination in equal measure. He would have been superb if he had been born a generation or two earlier as the good badman in a classy 50s b&w Western.
.
. 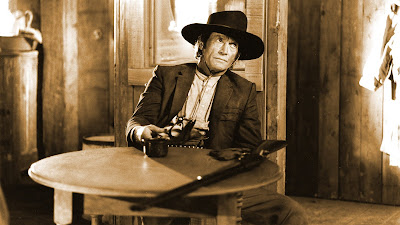 Classic
.
Another way you can tell that Mr Ferguson knows his Westerns is the, well, let’s call them affectionate quotations (I wouldn’t want to call them rip-offs or clichés). Gunfighter’s Moon (I don’t know why it’s called that; there is no lunar mention) references High Noon, Unforgiven and quite a few more classy oaters. The town, led by a pusillanimous mayor, refuses to back the acting sheriff up when three deadly gunmen just out of the pen come to town to free an accomplice (Dave Ward), now in the town jail. We all know that it won’t be the amateur lawman who faces down the bad guys, of course. It will be Lance, the Clintish gunfighter haunted by his past. Classic stuff, you might say.
You see, Morgan is in Sierra Mesa, Colorado where he has to dispatch a young Turk who believes he is faster on the draw (I wonder where all this quick-on-the-draw silliness came from? I must write a doctoral thesis on that one day). The boy is egged on by his obnoxious brother. This is a straight reworking of the first episode of Johnny Ringo on TV in 1959, which I happened to watch the same day.

Anyway, Morgan gets a telegram and sets off with his excellent dog Harley (in his only movie appearance, so far anyway) to Red Pine, Wyoming. As it turns out, though we don’t get to read the telegram yet, he has gone there at the request of Linda, an old flame (Kay Lenz), now married to the acting sheriff of Red Pine, the storekeeper Yarnell (David McIlwraith). Linda wants Morgan to save her husband, who, rather like Fred MacMurray in At Gunpoint, is outclassed by the lethal Walt Shannon (Brent Stait) and his henchmen Boise (Thell Reed) and the top-hatted Julio (Byron Chief Moon – so there was one lunar reference, I suppose). Linda has a funny way of asking for help, however: she launches into Morgan in a vitriolic way, cursing him six ways from Sunday for his failings. He still helps. Well, he’s a Western hero. I would have told her where to go and ridden out. 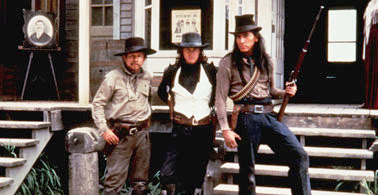 The villains
.
Sheriff Yarnell has a step-daughter, Kristen (Nikki Deloach), who is engaged to his Colt-twirling deputy Spud (Ivan Sergei). The sheriff and Kristen both think that the girl is the daughter of Linda’s first husband, a hero killed at First Bull Run. In reality, of course, she’s Morgan’s daughter, from that romance sixteen years ago. The plot thickens, as plots will.
I thought for a moment that Morgan had a derringer. That would have been slightly surprising, as they are usually reserved for gamblers, saloon keepers and shady ladies. But in fact it turned out to be a small pocket pistol, not quite a derringer. He relies, as is proper, on the Colt .45s at his hips.
Well, it all comes to a showdown, naturally. Though wounded (that pesky brother from Colorado has come to Wyoming and shot Morgan in the back from the shadows) our hero staggers from his sick bed and faces the three villains. And, as if we hadn’t had enough, er, affectionate quotations, Frank Morgan, his work done, rides off Shane-like, wounded yet again, leaving Kristen repining his departure – so maybe more Pale Rider than Shane but it’s more or less the same thing.
Derivative, you might call it, but I never mind that somehow. It places us in a Western comfort zone. You could do worse than have a look at Gunfighter’s Moon. Boppa was right.
PrevPreviousPrairie Fever (RHI Entertainment, 2008)
NextWynonna Earp (Seven24 Films/IDW Entertainment, 2016)Next