Jock Mahoney was a great hero of mine when I was a small boy because I was an avid follower of The Range Rider. As an adult I came to realize that he wasn’t the most natural of actors, though he was damn good at riding and Tarzanesque stunts. He stunted and doubled in a host of Westerns but he also did a few big-screen oaters as lead, such as Money, Women and Guns in 1958 (the year Yancy Derringer started). Despite the rather racy title, it’s a straight Western whodunnit.
.
. 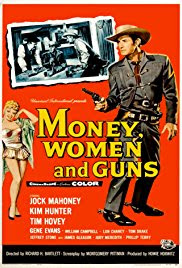 Jock is “the greatest detective in the West”, Silver Ward Hogan, who wears a fancy rig decked out in the precious metal and uses Lone Rangerish silver bullets as well. He is hired to find out who murdered crusty old miner Ben Merriweather (Edwin Jerome). Merriweather was ambushed by three men while working his claim. He got two of them but the third escaped. He just had time to scribble a will on an old piece of a dynamite box. But he seemed to be indicating with his dying breath that one of the heirs was the guilty one. Rather odd. That’s pretty well all Silver has to go on.

There follows a lengthy investigation in which all sorts of characters are visited as inheritors and/or suspects. One of them is a glam redhead, naturally, Mary (Kim Hunter, replacing Barbara Hale, too busy on Perry Mason). She has a young son, Davy (Tim Hovey) so we pretty well know right away that Silver, Mary and Davy will become a new nuclear family, just as in Hondo, Yuma, The Tin Star and countless others. They’ll probably go to California. They usually do.

It’s quite interesting in that all the heirs have a guilty secret but they repent and live better lives afterwards, all without violence. The film is episodic, a series of barely related sketches. It was apparently supposed originally to be a Capra-esque Christmas tale with the word dreams replacing guns, and indeed, there are residues of the Christmas spirit with the storekeeper’s sign announcing MERY CRISMAS to his customers and the boy hoping Santa will bring him some red boots (Santa obliges).

Frosty at first but then it’s lerve

The picture was written by Montgomery Pittman (who did mostly TV work though he did write the entertaining Rails into Laramie) for director Richard Bartlett, a prolific helmsman and producer of TV Westerns who worked on pretty well every Western TV show you care to name, especially Riverboat and Cimarron City but who also did some big-screen Westerns in the mid-50s, three of them with Mahoney as lead. 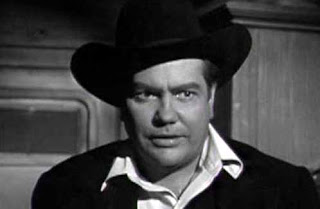 Gene Evans is the sheriff and Lon Chaney surprises by being honest against all expectations. Franklyn Farnum is the (uncredited) postmaster.

One heir, known only as Judas, is especially hard to track down.

It’s a bit short on action but I found it all rather enjoyable, I must say.