.
The Cisco Kid rides (yet) again
.
.
The other day I was blathering on about Cisco Kid movies. I thought I might move on from Cesar Romero and review a Duncan Renaldo one. The Gay Amigo, Renaldo’s fifth, will do as well as any. Of course in the 1940s the word gay had not yet acquired its meaning of homosexual in common parlance. In fact if anything it was used to refer to a man who seduced many women, as in ‘he’s a gay dog’. And Cisco is a renowned romancer of the dames. 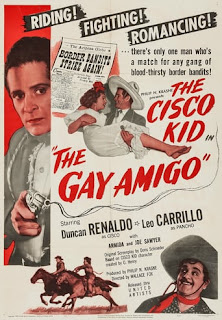 Duncan’s back, with Leo Carrillo as Pancho. The early Cisco pictures had no sidekick or different ones but from the Renaldo ones onward, happily, Pancho was there. Why these two Mexicans spoke to each other in mangled English, even when in Mexico, was never made clear but I suppose the producers were going for humor and an English-speaking market.

Joe Sawyer, the villain in an earlier, Romero, Cisco movie, Lucky Cisco Kid, has now become the dumb Army sergeant (the part taken by Dana Andrews in his first Western in the previous one), outwitted at every turn by the pardners. In this one he gets cross and there are fisticuffs but Cisco easily wins.

The local military is commanded by Captain Kenneth MacDonald and his second-in-command is Lt. Clayton Moore. Moore had actually appeared in 14 feature Westerns before becoming the Lone Ranger in September 1949. The Gay Amigo was released in May so he hadn’t yet donned the mask and was still rather a minor player. In fact he is soon written out, Sgt. Sawyer taking over as the captain’s right hand man. 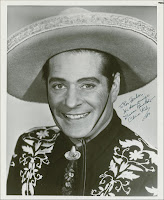 Renaldo, pictured right, actually Romanian born and Renault Renaldo Duncan, 1904 – 80, was also an associate producer, with Philip N Krasne, and the picture was directed by Wallace Fox (no relation but the brother of Edwin Carewe, director of the tragically lost Gary Cooper version of The Spoilers in 1930). Fox specialized in second feature Westerns, including wagonloads of Bob Steele ones, working for many of the Poverty Row studios, beginning in 1927. He directed 27 films for Monogram. If I tell you that the three Cisco Kid movies he directed were probably the pinnacle of his career, you’ll get an idea that he wasn’t exactly John Ford. Still, he churned them out competently.

Mind, there’s some extremely fake bronco-busting with Sawyer and Renaldo trying vainly to convince the audience that the mechanical contraption they are ‘riding’ in the studio is a real bronc. Renaldo is particularly bad at this.

There’s a gal, naturally, Rosita (Armida, a vaudeville star who, however, doesn’t sing and dance in this picture apart from one short song). I must say Cisco didn’t woo her all that much. The sergeant fancies her, though, just as Dana did Lola in that earlier movie. These films all had pretty well the same plot. 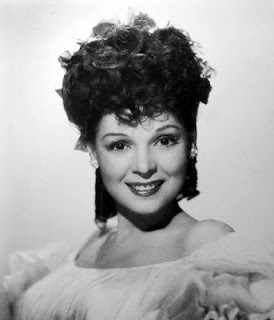 Sadly, they don’t finish with the “Oh, Pancho!”/”Oh, Cisco!” ending we know and love. You have to wait for the TV series to start in 1950 for that. In The Gay Amigo they just ride off for another adventure.

No one will pretend that this is a classy A-Western but it provides an hour of harmless black & white fun. 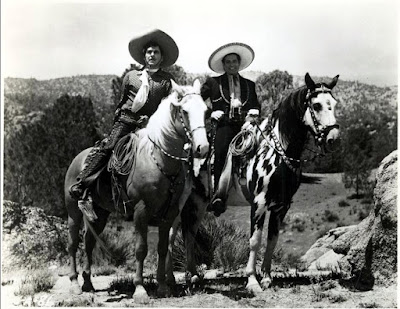