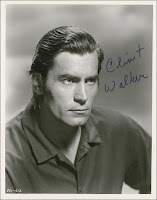 I was always a fan of Clint Walker (left) because as a small boy I was a great follower of ABC’s Cheyenne, which started when I was seven and was still going when I was fifteen. To me he was the archetypal solitary Westerner, being tall, tough and taciturn, always doing the decent thing. And the way he turned his shirt sleeve cuffs up was really cool. But it is true that much of his career was confined to the small screen and when he did do feature Westerns they tended to be a bit on the minor side. They were often still good, though, and you could do much worse than watch, say, Fort Dobbs, Yellowstone Kelly or Yuma. In 1967, however, Clint gained some big-screen fame as Samson Posey in The Dirty Dozen and so by ’69, when this Aubrey Schenck production hit the theaters, he was quite a good name. To Westernistas, of course, he always had been.
.
.

Schenck produced such classics as Daughters of Satan and Robinson Crusoe on Mars. His very first film, back in his Fox days, starred Vincent Price, so it was no surprise that Vincent would pop up in More Dead than Alive as well. Later Schenck worked with Eagle-Lion Films. When Eagle-Lion was bought by United Artists, Schenck and pals Howard Koch and Edwin Zabel started their own production company, Bel-Air Productions, producing a variety of action films as second features for UA. He was involved in a number of smaller but good – or at least interesting – Westerns, such as War Paint (a rare Western of Robert Stack), The Yellow Tomahawk with Rory Calhoun, Fort Yuma with Peter Graves, Revolt at Fort Laramie with John Dehner and Fort Bowie with Ben Johnson. The year after More
Dead than Alive (great title) he would finish his Western career with Barquero with Lee Van Cleef. 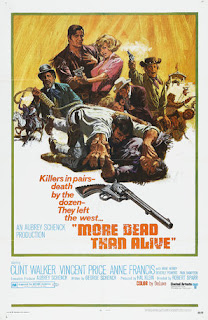 Like Barquero, More Dead than Alive was strongly spaghetti-influenced. Some reverse-engineering was going on in the late 60s as Hollywood tried to cash in on Italian commercial success by producing its own, American spaghetti westerns. Burger Westerns, let’s call them. The good old Vasquez Rocks or Kanab, Utah replaced Almeria as locations but many spag features, such as cheap jangly music (often with much moronic harmonica), ultra-close-ups, sensational action, gallons of fake blood and so on were evident. Luckily, though, the movies were not post-dubbed, and unlike most spaghettis they were more or less watchable. One of the worst features of spaghettis was the perfectly dreadful writing. More Dead and Barquero, however, were written, competently enough (despite the occasional anachronism), by George Schenck, doubtless a relation.

In More Dead Clint plays Cain, a rather unoriginally named man-killer, an ex-gun for hire locked up in the pen in the 1870s and now (we are in 1891) finally released for good behavior, determined to go straight and never touch guns again. We all know how that’s going to pan out. The movie starts with Cain refusing to take part in a very spaghetti jailbreak with gunmen jumping out of coffins (how spaghettis loved coffins containing anything but corpses) and blasting away but being cut down (mucho tomato sauce) by a prison guard with a Gatling gun.

Once out, Cain tries to get work but his name and fame precede him. A passing artist (Anne Francis) advises him to go elsewhere and change his name, but that doesn’t work either. His past always catches up with him. The picture is actually having a stab at saying something important here. So he decides to go back to the gun, and he joins up with Mr Ruffalo (Vincent Price) who has a Wild West show, doing trick shooting. Ruffalo still has Cain’s old six-shooter with eleven notches on the handle. The impresario already has a quick-draw sharpshooter, though, young Billy (singer-songwriter Paul Hampton, not an actor I knew, very 60s/spaghetti in appearance and costume) and Billy gets real jealous. You see Cain is the genuine article while Billy is only a cardboard cowboy who has never shot anyone. Yet. 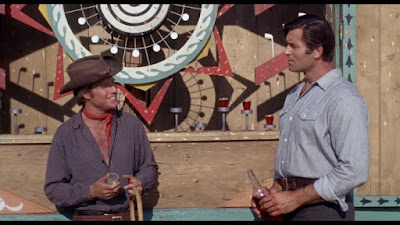 Price, second-billed after Walker, is of course far better known as a horror merchant but actually he appeared in quite a few Westerns – four TV shows and five features. He was the eponymous Baron of Arizona in the Samuel Fuller-directed Western of 1950, though to be frank that was really more of a Gothic melodrama than a Western. A couple of years before More Dead Vincent had also topped the billing in The Jackals, a South African remake of Yellow Sky – though he was essentially the only good thing about that remake. I think he was effective in Westerns, especially if he could get a charming-rogue part. 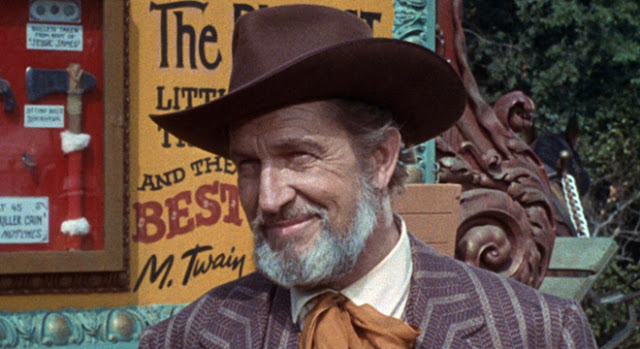 The picture is divided into seasons, though the last, winter, is just a reprise of the opening scenes.

The movie was directed by Robert Sparr, famously killed in a plane crash later that year while scouting locations for Star Trek (on Earth, though). He was a regular director of Western TV shows, especially Lawman, and did a good number of Cheyenne episodes with Clint. This was, however his first and last big-screen Western.

There’s a Blu-ray. On it there’s an interview with Clint. He says he got the part when his contract with Warner Bros expired and he was looking to do more features than TV. He describes Vincent Price as “one of the nicest human beings you could hope to meet”. He says that he was supposed to do another Western for Sparr, but the plane crash put a stop to that. He talks about how he became more and more disenchanted with Hollywood as time went on, but he says he still remains fond of More Dead than Alive. 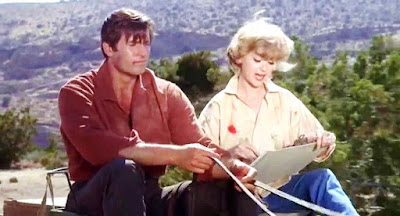 Artist Francis sketches him as they ride along

The New York Times said, “MORE DEAD THAN ALIVE is a dogged but dinky little Western with the perfect title. Clint Walker, television’s Cheyenne, is a big, fine-looking chap and about as live-looking as any man could be. And there is something winning about his taciturn earnestness as an actor.” That about sums it up. With Clint it got up to not bad status, though its spaghettiness drops it back down again.