Jamie makes it to the big screen 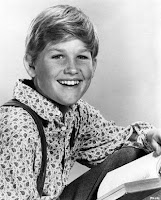 I never really followed The Travels of Jaimie McPheeters when it came out. It was aired by ABC for one season in 1963 – 64. Maybe it was because by then I was fifteen. I think I reckoned it beneath me. It was all about a small boy (way younger than I was) and it was rather too family-friendly. Moms liked the show, for goodness sake. Furthermore, the kid was sickeningly polite. And it featured the Osmonds. I kinda skipped it. I never read the source novel, either. Perhaps I should have done as Robert Lewis Taylor’s 1958 book of the same name won a Pulitzer Prize and I am told it was aimed at an adult audience and contains episodes that kept it off any school list at the time. Anyway it all passed me by.

Now, though, I have (slightly) upped my opinion – judging anyway by the theatrical movie MGM released in 1965, which was an expanded color version of the series’ final episode, The Day of the Reckoning. I think it was really not bad. Or anyway, no worse than many 60s Westerns. 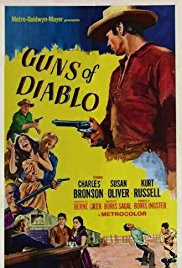 You probably know the story: young Jamie McPheeters, along with his amiable but rather disreputable dad (Dan O’Herlihy but Russ Conway in the movie) and an assorted group of pioneers, travel westward from Paducah, Kentucky to the California gold fields in 1849. Half way along, the wagon master Buck Coulter (Michael Witney) gave way to ex-gunslinger Linc Murdock (Charles Bronson, in the movie acting better than usual, more relaxed and natural). In the TV show various old friends of ours, Western character actors such as James Westerfield, Royal Dano, George Kennedy, Lee Van Cleef and Slim Pickens among others made appearances but these don’t figure in the movie, which is a relatively small ensemble piece with few actors.

Jamie persuades his dad to let him go with Linc to a nearby town – Diablo, presumably – for supplies. There Linc meets an old flame, Maria (Susan Oliver) whom he thought dead, accidentally killed by his own hand. She’s alive but now married, so it’s a mixed blessing. And she wed Linc’s rival, a man she didn’t love and a bad egg, Ranse Macklin (Jan Merlin). Ranse only has one arm, thanks to the shoot-out which left Maria for dead. And when he hears that Linc is in town, well, of course he wants his revenge. 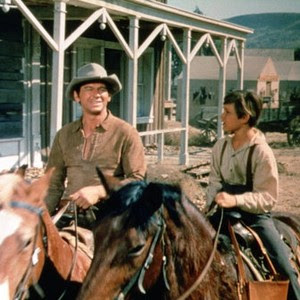 Trouble awaits as they ride in

He also has two ne’er-do-well brothers, Dan (Rayford Barnes) and Carey (Ron Hagerthy) and, together with the slimy hotelier Ives (John Fiedler) they do their utmost to help Ranse kill Linc.

We get the original events in flashback, with the screen going all blurry, you know how they do, just in case we are too dumb to realize it’s the past. This part goes on a bit. 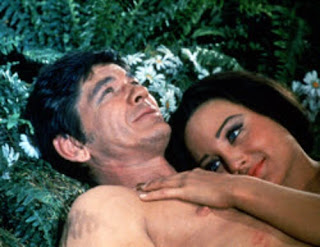 Back in Diablo, there’s a cranky old-timer in the hotel, played by good old Douglas Fowley, who rather specialized in such roles, who takes a shine to Jamie. The boy is ultra-respectful of, and kind to, the former prospector. Together they will assist Linc come the inevitable showdown. 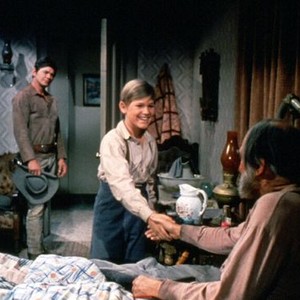 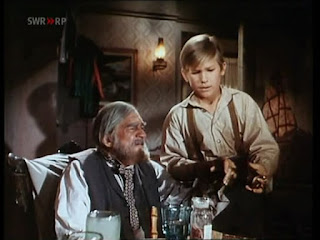 That’s about as far as the characters are concerned (it’s a small town, you understand, and probably a smaller budget), except a sympathetic barber (Robert Carricart) who loathes the Macklins and will also come to Linc’s aid when push comes to shove, by providing one of the Macklins with a closer than usual shave (throat-cutting censored).

It’s funny to see Kurt Russell, the tough Wyatt Earp and recently grizzled star of gore-fest Westerns such as Tarantino’s The Hateful Eight and the scary Bone Tomahawk, as a fresh-faced kid. Somehow I never imagined he was one. Of course there’s a long and noble tradition of ‘plucky lad’ adventures going back to Tom Sawyer, Treasure Island and before. Westerns in particular loved the genre because much of the audience was of an age to identify with the boy. 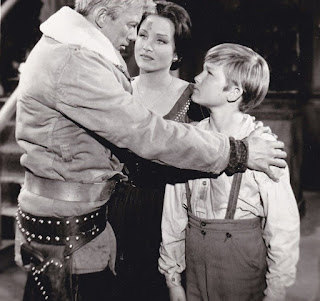 One of the bad guys tells Jamie to mind his manners. Jamie? Are you crazy?

Boris Sagal directed it. He helmed The Omega Man, a vaguely Westerny future-catastrophe movie with Charlton Heston that made an impact on me at the time (1971), and he had directed fourteen of the Jamie McPheeters shows, but as far as I know this was his only big-screen Western. He does OK, though it all does look very like a TV show. It is a bit slow in parts too,but the action finale is good enough and the whole picture pretty watchable on the whole. 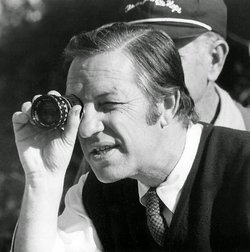 Boris checks it out

I wonder how many Westerns have been called Guns of…. something, or something …of Diablo. More than one, I’d wager. We know there was a Duel there in 1966. The title does give this movie a rather generic, not to say B feel to it.