Lesley Selander does his thing – again

A Bel-Air production sometimes billed as just Frontier Scout, put together by Aubrey Schenck and Howard Koch and released by United Artists in the mid-1950s (i.e. the high water-mark of the Western movie), Quincannon, Frontier Scout is very much in the low-budget Western category despite some (for Bel-Air) quite ritzy location shooting and Color De Luxe photography.
.
. 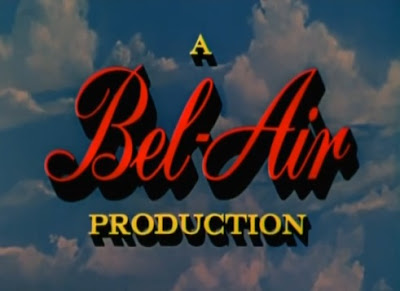 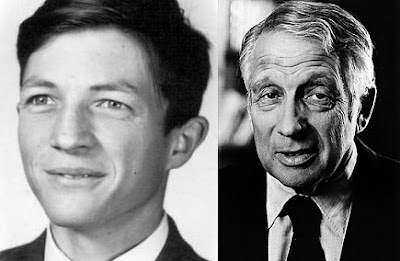 Schenck and Koch
.
.
Its main weakness is the lead, Tony Martin in his only Western. The pop singer was unsuited to the role and does not convince, either as gunslinger dressed all in black in the first reel or as Army scout later in the picture – and still less dressed up as an Indian, when he looks frankly ridiculous. Martin, then known as Al Morris, had left big bands (he played sax in Tom Gerun’s orchestra, alongside Woody Herman) for Hollywood in the mid-1930s, where he became Tony Martin, and Mr Cyd Charisse in 1948. He became quite popular in musicals and in the 50s also hosted a weekly 15 minute TV variety series on NBC. But he was wrong in our noble genre.
.
. 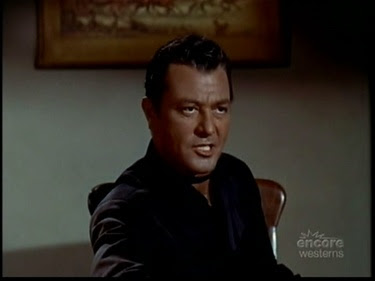 Still, there are some old-favorite character actors in support, John Doucette as the long-suffering Army sergeant being especially enjoyable. Morris Ankrum is the colonel, sadly written out after the first reel, and John Smith, Slim Sherman from Laramie, is the bad guy Army lieutenant. His bad-guy status is blindingly obvious from the outset. Being blond and advocating the extermination of the Indians, he is clearly a Nazi. He reminds us of Tab Hunter’s Ed in Gunman’s Walk, George Macready’s Younger Miles in Coroner Creek or, even more, of Alex Nicol’s Army lieutenant in Tomahawk. He duly proves to be a swine, and is duly thwarted by Quincannon. 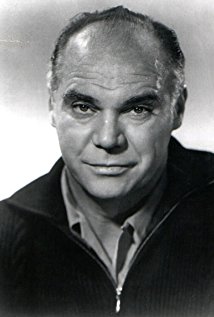 The excellent John Doucette is the sergeant

The director was good old Lesley Selander, who helmed so many Westerns reviewed on this site, and no wonder given that he had been directing oaters since Empty Saddles with Buck Jones in 1936 and concentrated on oaters for the rest of his career. He was the go-to director for Hopalong Cassidy programmers. The IMDb bio says he “had a professionalism and a verve that many of those made by his fellow B directors lacked” and that is true. His pacing especially was good, his movies rattling along at an excellent rate. As the market for Westerns declined, Selander turned to TV – including Laramie episodes with Smith. The last few feature films he made, in the mid- and late 1960s, were a number of “geezer westerns” using aging cowboy stars, churned out by producer AC Lyles. But I like his 1948 Panhandle, Dakota Lil, War Paint, Fort Yuma and Tall Man Riding, among others, and I am a bit of a Selander fan. 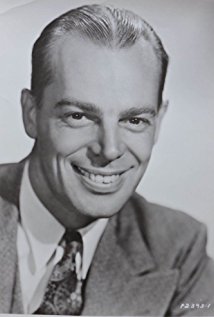 A Bozeman Trail story, it’s based on the novel Frontier Feud by Will Cook, and is written by Don Martin and John C Higgins. 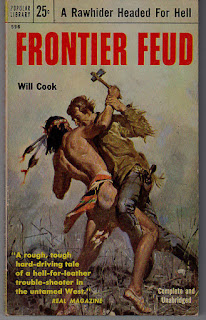 Two dubious characters ride into town looking for Quincannon. It looks like they are gunning for him. But it turns out that they are an Army lieutenant (John Bromfield, the Sheriff of Cochise) and a sergeant (Doucette), both in plain clothes, bearing a message from Col. Ankrum. The colonel wants Quincannon back as a scout. More of a detective, really, because the Army has lost 800 repeater Henrys, which was careless, and the Arapahoes have got ‘em. As you know, allowing rifles to fall into the hands of Indians is one of the worst disasters that can befall any Western. 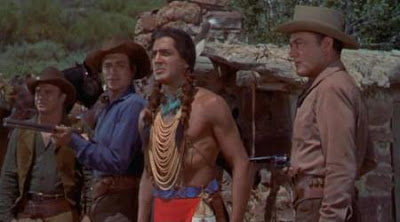 At first Quincannon declines the offer, rather forcefully it must be said, but then a glam gal (Peggie Castle, Marshal Dan Troop’s love interest in Lawman) arrives on the stage and wants to go to Fort Smith to ransom her captured brother, so, surprise, surprise, Quincannon changes his mind and accepts the mission. 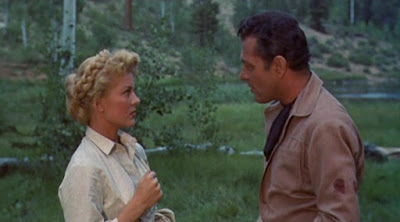 Quincannon is a classic “man who knows Indians”. He speaks their lingo and knows Chief Iron Wolf (Edmund Hashim) personally, calling him “an Indian skunk.” Quincannon stands up for the Indians, though, when the colonel calls them savages.

Well, the four of them, Quincannon (whom everyone annoyingly calls Quinny), Lt. Bromfield, Sgt. Doucette and Ms. Castle, set off to cross Indian territory to reach the fort, which they are able to do thanks to Quincannon’s savvy, courage, daring and what-have-you. The fort is of course one of those wooden toy forts Hollywood loved, equally inevitably filmed at Kanab, Utah (it was a favorite stamping ground of Koch and Schenck; in fact I believe they had their ashes scattered there). 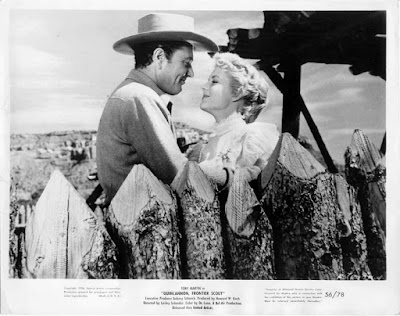 Romance on the palisade

There they find Capt. Bell (Aussie Ron Randell, slightly Ronald Reaganish in appearance but not a Western specialist – he only did four and this was probably his biggest part) in command, and we smell a rat with him too. We are soon proved right; he is in cahoots (that fine Western word) with Lt. Smith in the gun-running racket.

There’s Selander action aplenty from there on, and you may guess how it all turns out (nuptials, my dears).

It opens and closes with a warbled ballad of great direness.

No worse than many mid-50s Westerns and a good deal better than many, Quincannon, Frontier Scout is definitely worth a look, even if rather let down by the star. At least he didn’t sing. 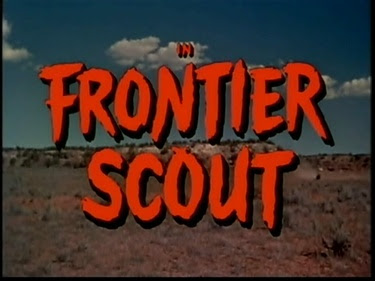 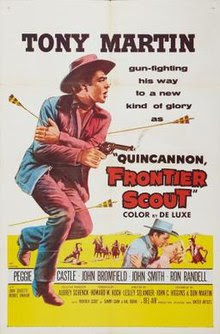