There is a long and laudable tradition of the Australian Western that goes back well before Quigley Down Unde (1990). The colonial history and then settlement of that vast country has much in common with the American story, with its lack of organized law and order in huge swathes of the land, the often inhospitable terrain and the conflict with aboriginal peoples, as well as the sense the largely European incomers had of entitlement and manifest destiny. Lovers of the American Western in all its forms will readily recognize all this. And in Ned Kelly the Aussies even had their own Jesse James. Mick Jagger and Heath Ledger were only the last in a long line of screen Ned Kellys. In fact one scene in Sweet Country, now showing on Netflix (at least here in France), shows spectators watching an early silent flicker of the outlaw’s exploits.
.
.

Of course some might say that ‘Australian Westerns’ are a contradiction in terms. A true Western, purists argue, must be set west of the Mississippi in the period between the end of the Civil War and the end of the century. I don’t agree with that narrow definition. If you look at some Australian motion pictures – take the very fine The Proposition (2005), for example – you will find much that is indubitably Western. And hell, how much further west of the Mississippi can you get than the Outback?

Sweet Country (a gently ironic title) opens with a torrent of racist abuse and that sets the tone for the whole story. The film is really a treatise on the deep-seated, institutional and widespread contempt that the ‘white’ settlers had for the ‘black’ indigenous peoples. It is not the first to do this (we think of The Chant of Jimmie Blacksmith in 1978) but it is certainly one of the most powerful. A newly-arrived farmer, Harry March (Ewen Leslie) asks his neighbor where he gets his “blackstock”. The man, Fred Smith (Sam Neill, such a versatile actor) who does not drink, smoke or swear – or at least he swears but asks forgiveness of heaven when he does so – replies piously that everyone is equal on his station (farm), which March scoffs at. In a way March is right because though Smith’s demeanor is decent he still as a favor lends out his farm hand Sam and his wife Lizzie (Hamilton Morris and Natassia Gorey Ferber) as free labor to the newcomer, as if they were draught animals. 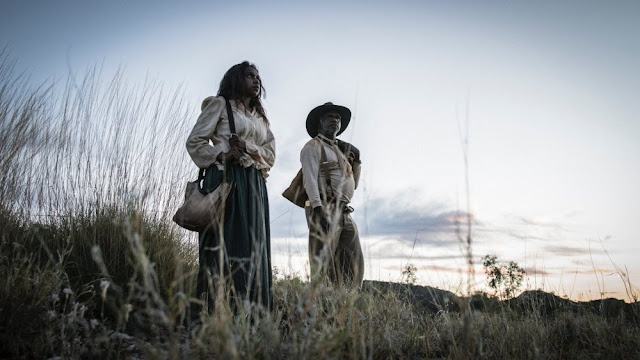 They go on the run

This March is alcoholic and clearly damaged by his time on the Western front (the story is set in the 1920s). He is in fact close to mad. But he is also a brute who has designs on Sam and Lizzie’s young niece. He says, “I wanted the other one but you’ll do,” and rapes Lizzie instead, in a suggestive and chillingly brutal scene in complete darkness. He then sends the Aborigines away back to Smith’s station with no thanks, pay or food. 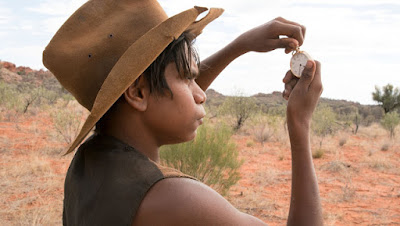 Fascinated by the white fella’s watch

There is also a boy, Philomac (Tremayne or Trevon Doolan) who may or may not be the son of another neighboring farmer, Kennedy (Thomas M Wright), whom March chains like a dog because he fears the lad will steal from him. But the lad escapes in the night and goes to Smith’s station. March follows him and, crazed with fury, starts shooting into the cabin with his service rifle. To protect himself and his wife, Sam grabs Smith’s shotgun (Smith being away in town) and shoots the psychopathic farmer dead. The boy witnesses the deed but later lies about that.

So now Sam and Lizzie go on the run. He has killed a white man. He knows that any question of the rights and wrongs of that will receive little consideration. 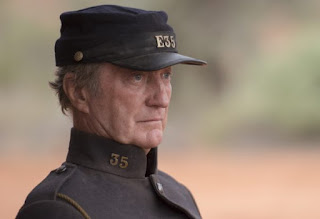 Enter the lawman. Sergeant Fletcher (a superb Bryan Brown, pictured left), also a veteran, is almost as deranged as March. He has the job of raising a posse and tracking down the killer, and he seems obsessed beyond any normal sense of duty with bringing Sam in. It’s almost The Searchers. The pursuers consist of the policeman, a man named Minty (uncredited actor), Smith, Kennedy and an Aboriginal tracker, Kennedy’s man, Arch (Gibson John). Sam leads them into “Aborigine land” (read Indian territory) where the party comes into conflict with a warlike group and Minty is killed. First Smith, then Kennedy and his man give up and return, leaving Fletcher to continue the pursuit alone. He is no match for the wily Sam, who even manages to introduce a scorpion into the policeman’s boot.
.
. 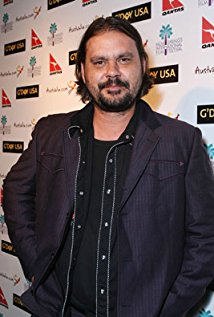 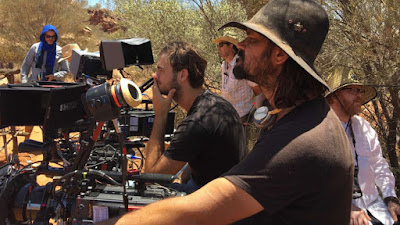 On the set at Alice Springs

It’s a pursuit/hunt Western, therefore, the kind we have often seen before, with rapid flashbacks and flash-forwards in the modern way. It is done with real atmosphere, with no background music and in “silence” (the loudness of soughing wind and croaking crickets). And the picture is starkly beautiful from a visual point of view too, with cinematography by Dylan River and director Warwick Thornton (who won a Caméra d’Or at Cannes for another movie) highlighting the pitiless nature of the terrain and its huge, empty appeal. The scene in the white sands or salt desert especially has a cruel beauty. The light has a yellow tinge to it, as I have noticed Australian Westerns tend to do. Sometimes the dirt is Arizona-orange but there is still a yellow wash over it. 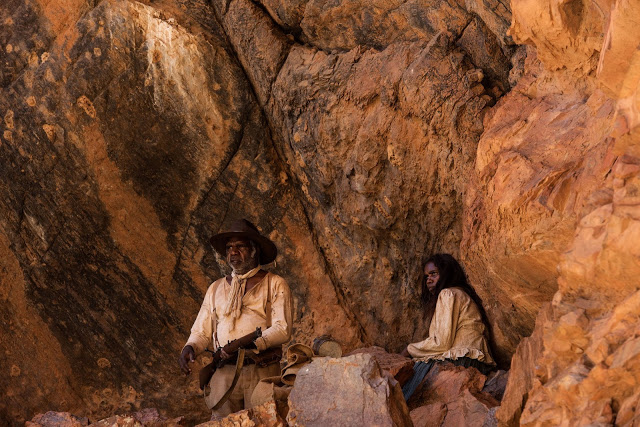 Though Sam has eluded the pursuing law, his wife now having fallen pregnant by March, he decides to give up and the sergeant, who has narrowly survived (only thanks to having been given water by Sam) finds the couple one morning sitting cross-legged on the ground outside the jail, waiting for him. 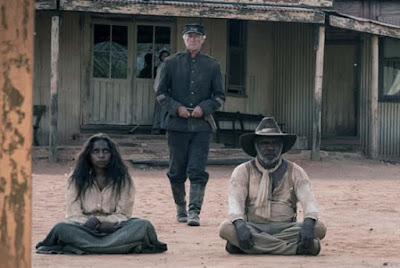 They turn themselves in

We are so used to trials in Westerns being farcical versions of the judicial process with corrupt, biased and incompetent judges, that we fear the worst when Judge Taylor (Matt Day) arrives to hear the case. We are also used to the sound of carpenters hammering and sawing outside the cell, showing that the legal system is hardly bothering to wait for the official verdict. The sergeant gloats over the prisoner, asking him if he can hear the noises. The coarse mob outside the saloon, or pub as they call it, can’t wait either and its members cry, “Hang the black!”

We see a few flickers of humanity from the bigots, and I always think it’s better when the bad guys show some goodness and the good ones some failings. The sergeant loves the saloon woman Nell (Anni Finisterer) and smiles affectionately at her daughter. He dreams of leaving the violent country and setting up a station somewhere (it’ll never happen). And finally he shows decency and a sense of duty which belie is earlier threat to Sam, “I am the law”. 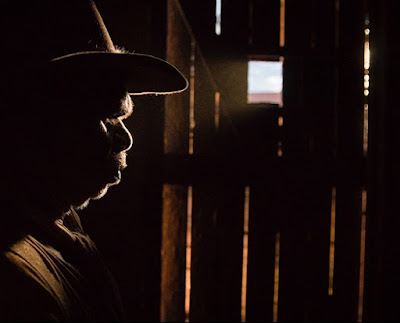 The director/cinematographer had certainly seen some Westerns

But the ending (which I shall not reveal, dear e-readers) is as brutal and racist as the beginning, and there is a clever if ironic twist on the gallows-building. We go out to the Johnny Cash song Peace in the Valley for Me, which seems curiously appropriate.

I think it’s a fine movie, and you should catch it if you can. 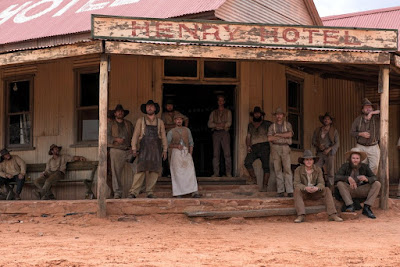 A saloon by any other name would smell as rank
PrevPreviousArizona Bushwhackers (Paramount, 1968)
NextThe Proud Ones (Fox, 1956)Next