Ryan at his best (and that’s saying a lot)

One of the best of the mid-1950s Westerns, The Proud Ones benefits from a superb performance from its star Robert Ryan. Thank you, reader John Knight, for reminding me that it was still to be reviewed!
.
.

It was a big production, in CinemaScope and Color De Luxe, photographed by Lucien Ballard,  no less, and shot on Fox’s attractive Western town lot and in some fine Arizona locations. And the FoxHome DVD is excellent on my widescreen smart TV.

It is in many ways a classic tough-marshal-cleans-up-the-town Western, with Ryan as Marshal Cass Silver of Flat Rock, determined, this time, to stand up to crooked saloon boss Honest John Barrett, played, brilliantly, as ever with such roles, by Robert Middleton. I say “this time” because you see Silver used to be marshal of Keystone (read Tombstone) where Barrett also held sway but the lawman’s woman Sally (Virginia Mayo, solid as ever, in the fifth of her eleven Westerns) persuaded him to cut and run because the odds were too stacked against him. He has regretted this ever since, so when Barrett comes to Flat Rock he sees it as being given a second chance, and he ain’t going to run again.

Silver has a couple of deputies, the nervous Jim (Arthur O’Connell) and old-timer Jake (Walter Brennan, practicing for his part in Rio Bravo four years later). And the lawman also hires on a young two-gun hotshot, Thad Anderson (maybe the model for Ricky Nelson’s character in Rio Bravo), who also, it transpires, has ‘a past’. Thad has come up as a cowpoke with a Texas cattle drive (as Ricky would) but he has a grudge against Silver: back in Keystone, Marshal Silver had shot his dad. Uh-oh. 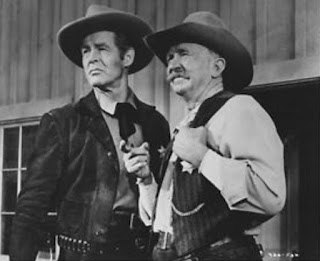 This is actually one of the few weaknesses of the picture: The Proud Ones stands or falls on the interplay between the characters of marshal and young man. At first the youth is surly in the face of the lawman’s kindness. He’s a proud one, you see. Will he come round? Will he challenge the older man? Ryan is superb, so no problem there (he always was superb) but Jeffrey Hunter plays the conflicted deputy and he isn’t quite up to the task. You can see him thinking ‘I must act conflicted’, but that’s just it: he’s obviously acting, while Ryan just looks and sounds completely right in his part. You never really believe that Thad will draw on the marshal.

Hunter did a good number of Westerns, starting with Lure of the Wilderness (more of an adventure really) in 1952, also with Walter Brennan, then in ’54 he was one of the Three Young Texans. In 1955 he was the Indian Little Dog in White Feather and one of John Brown’s sons in Seven Angry Men. But he really came to Western fame with his part in The Searchers, and John Ford would later make him the star of Sergeant Rurledge (Hunter outranked Woody Strode in the credits, but that’s Hollywood for you). The Proud Ones was Hunter’s seventh big-screen Western and he isn’t bad in it. He was never bad. He was just not all that good.

Needless to say, there is something Earpish about Ryan’s marshal. We were discussing in comments about Warlock the other day how Henry Fonda’s clean-up-the-town lawman Clay Blaisedell resembled Wyatt Earp (I mean the Wyatt Earp of myth, naturally, not the real one) and there are many Westerns of this type. Robert Ryan was one of the very best in the role.

Marshal and deputy take on the bad guys

Ryan was one of the best ever Western actors. He had started with small parts in Texas Rangers Ride Again and North West Mounted Police (both in 1940) and had been Bat Masterson’s decent supporter in Trail Street with Randolph Scott, in 1947. He was the Sundance Kid in the splendid Return of the Bad Men the same year, and stole the show on that one.  In fact I always think he was better as the heavy. In 1952 he was the ruthless megalomaniac in Horizons West and the year after he was marvelous as the vicious and Machiavellian opponent of James Stewart in Anthony Mann’s The Naked Spur. He was outstanding in Bad Day at Black Rock in ’55, maintaining his badman credentials, and the same year he was about the only good thing (though he was wasted in the part) about the turgid The Tall Men. So by the time of The Proud Ones he had a magnificent Western CV, and even as the hero you feel he has semi-badman apsects – as all Earpish marshals should. If there’s a Robert Ryan Fan Club I should be a life member. 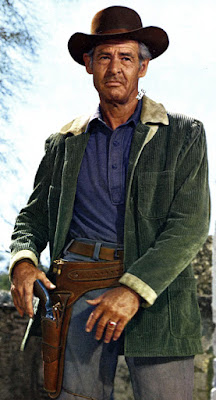 The director was Robert D Webb. Webb had worked as assistant to Henry King, for example on Jesse James in 1939, so presumably learned a thing or two. He directed Elvis Presley in Love Me Tender, a title which may have confused an adjective for an adverb; but hey. His first Western as director was that one with Hunter, White Feather, and The Proud Ones was his third. Afterwards he would only do the late and rather ho-hum Alan Ladd oater Guns of the Timberland in 1960 and the slightly curious South African Western The Jackals with Vincent Price in 1967 so I’m not sure we can think of him as truly an expert in the genre. Still, The Proud Ones was his best Western and we can’t be too snooty. I mean, snooty, moi? 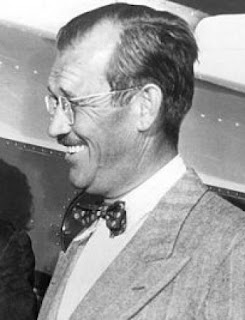 Usually in these Westerns you get a respectable dame for the hero to fall for and a racier saloon gal for him to dally with, but he will eventually choose the good woman. This time, though, there’s no sexy moll in the bar, which is a disappointment, and the marshal is clearly in thrall to the restaurant owner Sally (Mayo) who, let it be said, is rather a nag. She doesn’t understand that a man’s gotta do what a man’s gotta do and keeps on trying to persuade her beloved to make a run for it again. Not gonna happen. He’s a proud one.

Mind, Robert Middleton would have no truck with saloon women. The hefty Middleton nearly always played contemptible villains despite being the mildest and pleasantest of men but he was great in Westerns. Apart from being a regular on TV shows he did a goodly number of big-screen oaters and I think of him especially as the portly detective Siringo (not Charlie, presumably) in Love Me Tender, and he was an excellent dress heavy in Red Sundown three months before The Proud Ones. He was brilliant as the Ike Clanton-ish paterfamilias in Day of the Badman but any Western heavy part suited him (heavy in both senses). He was utterly superb as Big Clay Mathews in Cattle King. One of the great Western character actors.

Middleton and Mayo have a past. Most of the characters do.

Before he takes the job as deputy, Thad tries to hire on as gunslinger to Middleton but the saloon owner turns him down, saying he doesn’t employ henchmen (the liar). In fact no sooner has Thad been turned away than two of the crook’s paid killers turn up in town to dispose of the pesky marshal, namely Chico and Pike, played by our good friend Rodolfo Acosta and the rather sinister Ken Clark, complete with facial scar. Clark, vaguely Chuck Connorish in mien, was a regular on Fox Westerns and sci-fi flicks and was actually quite good. He too had started in Love Me Tender and made appearances in The Last Wagon and The True Story of Jesse James (in which Jeffrey Hunter was Frank), making a final appearance in the saddle in A Man Called Sledge. As for Rodolfo, his Western roles are too numerous to mention – this was his tenth feature Western of very many – but he was always good.

Pocket pistols play a key part in the plot (though sadly not proper derringers).

There are some old friends lower down the cast list, such as Whit Bissell as a townsman – the townsmen are properly pusillanimous, leaving the marshal pretty well alone to maintain law ‘n’ order: “If I were a member of this council,” the marshal tells them, “I couldn’t look in a mirror without vomiting.” Ouch. And Paul E Burns is especially good as a sort of silent (if rather inebriated) Greek chorus. He plays the town drunk who observes what is going on with some sadness. He is treated kindly by the marshal, being sent home from jail, a bit like Jack Elam by Marshal Gary Cooper in High Noon, you know how they do.

Marshal is kind to town drunk

The movie opens and closes to some ghastly whistling but a lot of the music, by Lionel Newman, is rather good, and goes particularly sinister, like a Hitchcock movie, when the hero gets blurry version (he is suffering from concussion) and can’t see to shoot the bad guys.

I like The Proud Ones. It has a classy look and reminds me of, say, Gunfight at the OK Corral or Wichita or The Tin Star, quality mid-50s Westerns with tough lawmen doing what a man’s gotta do and which are still definitely worth a look.