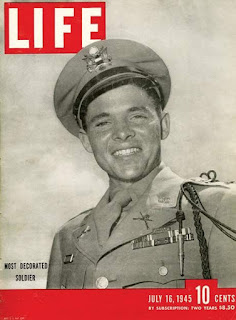 On July 16, 1945 Audie Murphy appeared on the cover of Life magazine. He had returned to the US as the most decorated hero of World War II. He had not yet even celebrated his twenty-first birthday.

James Cagney saw that copy of Life and felt that Audie had real movie-star potential. The young ex-soldier moved to California in the summer and stayed with Cagney for a year. Nothing much happened during this time in terms of movie parts but finally Audie landed a minor role in an Alan Ladd picture, Beyond Glory, to be followed by another small part in Texas, Brooklyn and Heaven.

He was dissatisfied and wanted a starring role. In the fall of 1948 Audie got his chance, starring as a juvenile delinquent in Allied Artists’ Bad Boy, premièred in February 1949. The month before, he had married rising Paramount star Wanda Hendrix. Audie and Wanda were puffed as “America’s most romantic young couple.”

The commercial success of Bad Boy convinced Universal to offer Murphy a seven-year contract at $2500 a week. They saw him in the saddle and indeed, although he would do other genres, from then on Audie became associated chiefly with the Western. Because of his youth (he was still only in his mid-twenties) and baby-faced appearance, he was given roles in 1950 as Billy the Kid and the young Jesse James, in The Kid from Texas and Kansas Raiders. Between those two pictures he made Sierra, released in May, with Hendrix, though in fact their marriage was already on the rocks and they would divorce soon after.

America’s most romantic young couple, but not for long…

Sierra was far from Audie Murphy’s greatest Western. It had a rather improbable plot and in it Murphy showed limited range as an actor. He spent most of it being surly, like his part in Bad Boy. It was directed by Alfred E Green, a real vet who went right back to being an actor in the Selig Polyscope days in 1912, directing features, as Al Green, from 1917. The IMDb bio says he was “A solid, dependable journeyman, not given to flashy directorial touches” and that “he was picked by Mary Pickford to direct quite a few of her pictures in the 1920s.” Sierra was the last of only four Westerns he ever directed in that very long career, so he was hardly a specialist. 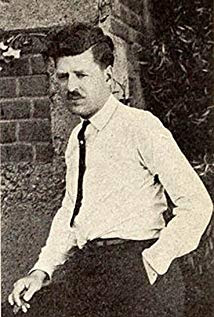 However, one of those four was the absolutely charming Four Faces West (MGM, 1948) in which he directed Joel McCrea and Frances Dee. I love that picture, so Green is in my good books. Still, it must be admitted that Sierra was not exactly his finest hour. He was better pairing Groucho Marx with Carmen Miranda in 1947.

The picture is attractive to look at. It was shot in Technicolor by Russell Metty, his fifth Western (he would later do the visually splendid The Misfits) and the locations round Kanab, UT are really nice. There are some great shots of running horses. There’s also pleasant-enough music by Walter Scharf.

Another good feature is the entertaining character of a singing old prospector Lonesome, a sort of plump Greek chorus, played by the great Burl Ives. Ives appeared in eight big-screen Westerns and would be wonderfully good in Day of the Outlaw for André De Toth in 1959. Here he has a smaller part than that but is still enjoyable. 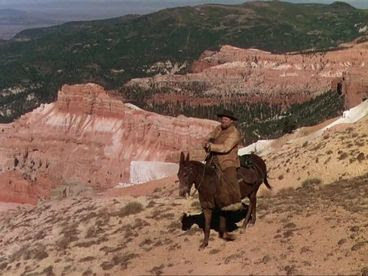 Hermit Lonesome rides the Sierra on his mule, singin’

Audie plays Ring Hassard, a mustanger living up in the Sierra as a recluse because his pa Jeff (Dean Jagger, in a rather blander role than he was used to or capable of; this was his first Western since his magnificent part in the noir Pursued) was wrongly accused of murder some years before (it was a mysterious large man who had really been the killer) and so they hide away from the world in a remote and hard-to-find cabin in the mountains. You can only get to it by riding through a canyon-bottom river (it kinda reminds you of the lair in Johnny Guitar). 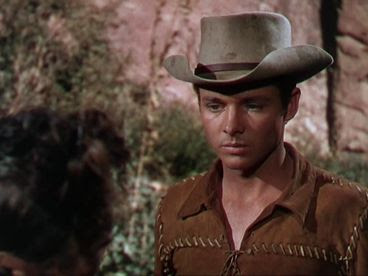 Audie is surly (at first)

A young woman appears, Riley (Hendrix). She has lost her horse and has been wandering round for days. She stupidly fires a shot when Ring is trying to get close to some wild horses. She then faints. She continues to be equally tiresome and silly through most of the movie. Ring blindfolds her and takes her to his cabin to give her food and rest but from then on she seems to be a jinx. She follows Ring and Jeff on one of their horses and then loses that one too. Then Jeff is badly hurt trying to bust a bronc to replace the missing horse. She and Ring ride into town to get a doc but she is bitten by a rattler. He saves her (by shooting the poison out of her arm with his sixgun, rather a natty bit, that) but ends up on trial for horse stealing – and, as any Western fan knows, that there’s a hangin’ matter. She turns out to be a “lady lawyer” (a bit like Paula Raymond in Devil’s Doorway later the same year) but is a signally incompetent one. So Lonesome has to bust Ring out of jail, in a very unlikely scene in which he sings a song which reveals his plan to the man behind bars but also to the deputy (Gregg Martell), who must have been mighty dumb. 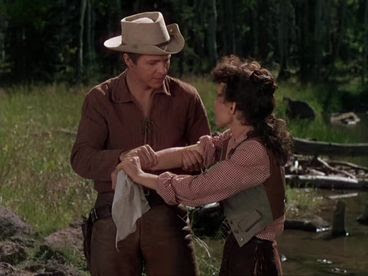 Then she gets snakebit. It’s one thing after another.

Now Ring really wants those wild horses. When I see these movies with a splendid black stallion running at the head of his herd and a covetous man looking on I always root for the horses. How much better it would be if they remained free! But they never do.

However, he can’t corral them all on his own, what with Pa being laid up flat on his back and all, so he gets Lonesome to recruit some outlaws who would like the work (I told you it was improbable). They are led by outlaw-with-a-heart-of-gold Old Sam Coulter (Houseley Stevenson). He has three sons, Brent, Jed and Little Sam. Brent is played by Anthony Curtis, in his first Western. Universal would later try him out as a Western lead, in the Rawhide Years in 1956, but it didn’t take and he never did another one. Brent has robbed a bank and that’s why his family are on the run. Jed is played by our old pal John Doucette, already a seasoned Western vet who had been doing oaters since 1942. And the part of Little Sam is amusingly taken by 6’ 6” (1.98m) James Arness, billed as Jim Arness and only in his third Western (he wouldn’t become Matt Dillon till 1955). 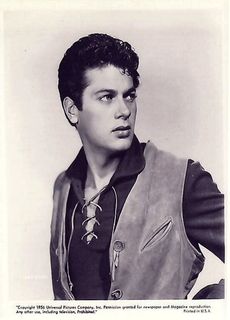 They were trying Tony out with a sixgun

The lady lawyer is already falling for Ring (not yet vice versa) but she’s engaged to aggressive rancher Duke Lafferty (the rather forgettable Elliott Reid, in his only Western) and being an aggressive rancher, Duke naturally has henchmen (they were de rigueur in them days), led by his foreman Big Matt (Richard Rober, in his first Western of five). Now as Big Matt is (a) big and (b) a thug, we may fairly suspect him of being the big man who had really killed the fellow that Ring’s dad Jeff was blamed for. And (spoiler alert, oops, too late) we would be right.

Ring is now softening towards Wanda (even though she has lost yet another horse and tripped up feebly in front of the stampeding herd; if it’d been me I would have left her there, but no, Audie rides gallantly to the rescue as good Western heroes are obliged to do). We know they are destined for nuptial bliss (even if they would divorce early in ’51). 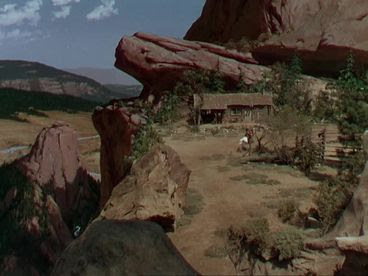 The ending is so neat and pat that it is trite. But never mind.

There’s a story that during the filming the Murphys camped in the bed of the dry Kanab Creek but a sudden cloudburst caused a flash flood. Audie “leaped on the back of his horse, grabbed Miss Hendrix and rode up the canyon-side to safety.” Pity the cameras weren’t rolling. They could have used that footage in the movie.

Sierra was based on the Stuart Hardy novel The Mountains are my Kingdom and it was a remake of Universal’s 1938 black & white melodrama Forbidden Valley with Noah Beery Jr.

No great shakes, Sierra is still honest entertainment. It had a decent budget and production values, and it is a must for Audie fans, of course. 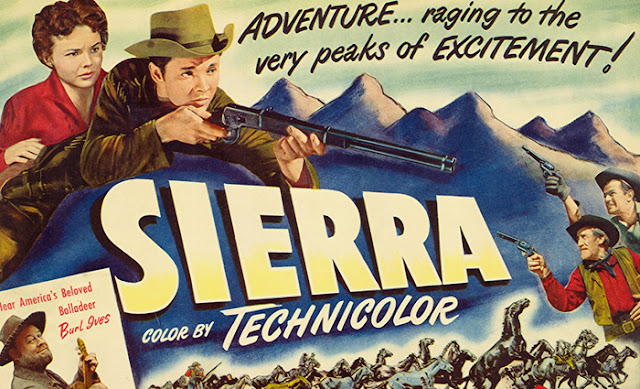