1950s comedy Westerns could be quite fun. A Ticket to Tomahawk, Alias Jesse James or The Sheepman, for example. But this one is a bit labored and the cast wasn’t up to those others.
.
. 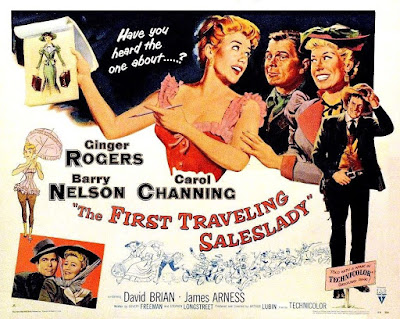 I watched this on British TV, which I get here in France by satellite, and hilariously it had a PG (Parental Guidance) rating because of “outdated racial and gender representations”. It is true that Ginger Rogers’s character, Miss Rose Gillray, is patronizing (I suppose we should say matronizing) to a black porter, and her companion Molly (Carol Channing) shrieks when she finds that an Indian outside a cigar store is not made of wood, but actually there are very few African-Americans and Native Americans in the picture, so it can’t really be fairly accused of racialism. As for the representation of women, it might make a present-day feminist clench her (or his) teeth but in fact Rose is a sort of suffragist pioneer, championing women’s rights in 1897 America. And she wins out. So it ain’t that demeaning to women either.

It was directed by Arthur Lubin (left), the Abbott & Costello fellow, who directed their 1942 comedy Western Ride ‘Em Cowboy. In the 1950s he was put in charge of the Francis the Talking Mule series which doubtless had you glued to the screen (if you are old enough). Traveling Saleslady was the last picture produced by RKO. Ginger Rogers quipped that the movie sank the studio but in fact years of mismanagement, especially under Howard Hughes, had driven away many directors, producers, and stars. Big-budget flops made the debts mount hugely. In January 1957 RKO’s owners, General Tire, sold the Hollywood and Culver City facilities to Desilu. It was a sad demise. The studio had done wagonloads of Westerns but now it rode off into the Sunset.

It was no low-budget affair. It was shot in Technicolor, had a runtime of 92 minutes and it boasted a huge cast. If the actors weren’t quite of the top rank they were still well enough known. Ginger Rogers topped the bill, though her star had definitely faded (she would abandon movies for a time in ’57, aged 46). She is the eponymous salesperson, amusingly (for the 1950s) purveying corsets but then somehow getting involved in selling barbed wire in Texas, which makes her about as popular as an arms dealer at a Quaker meeting. 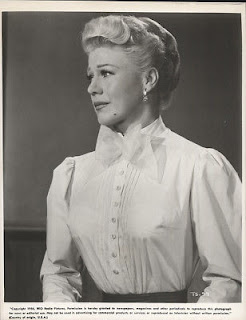 Second billing went to genial all-around nice guy Barry Nelson, playing the hapless man Masters who is finally mastered by the saleslady. He had been the first ever screen 007 (on TV) but he was hardly a huge star. Carol Channing, alumna of the stage productions of Gentlemen Prefer Blondes and Hello Dolly, played Rose’s companion Molly. She has a really grim song A Corset Can Do a Lot for a Lady, in which she comes across as, frankly (and sorry), coarse. 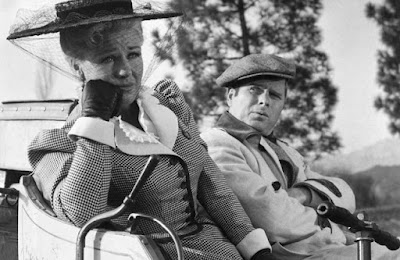 Of course these were all comedy/musical stars, not Western ones, but once we get past them on the cast list we find David Brian, James Arness and Clint Eastwood. Brian, who plays Carter, the barbed wire magnate, had a solid track (or trail) record in oaters. Being blond, he was often the villain. I liked him best as saloon owner Dick Braden in Dawn at Socorro (1954). Jim Arness was of course already famous as Matt Dillon because the TV Gunsmoke had started in 1955. Clint wasn’t famous yet; Rawhide didn’t start till ’59. He’d only had bit parts thus far, such as First Saxon (uncredited) in the gripper Lady Godiva of Coventry. This was only his second credited role in a feature and his first Western. He plays a lieutenant recruiting for the Rough Riders (Teddy Roosevelt makes a brief appearance, played by Ed Cassidy). Molly falls for the handsome young officer hook, line and, naturally, sinker. He will soon be off to Cuba but that doesn’t stop him wooing the saleslady’s companion (though she was at least a decade older, but we mustn’t be ungallant). 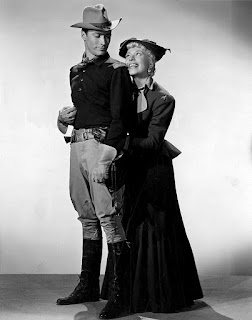 In bit parts here and there we have some faces Westernistas will recognize, such as Danny Borzage, Lane Chandler, Tristram Coffin, Franklyn Farnum and Kermit Maynard.

Rose tells Carter, “I never use being a woman as a selling point,” but this is patently false. Feminine wiles are an integral part of her sales technique. She and Molly go to Kansas City because “that’s where the West begins” and there she meets the rather obviously named Joel Kingdom, rich Texas rancher (Arness, in very 1950s hair oil), who falls for her, even when he knows she is selling the dreaded barbed wire. He wears a six-shooter in a holster even in his hotel suite. She gets the suite by pretending to be a secretary of the Prince of Wales, whom Kingdom wants to meet, giving as the reason a wartime expression, “Hands across the sea”. 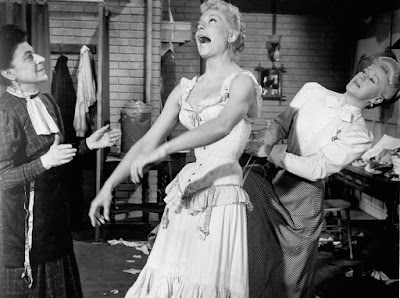 A lot of nonsense ensues.

I must say that much of the dialogue is really clunky, and the acting is often correspondingly heavy handed. The picture was not a glorious way for RKO to bow out. Ginger fans may like it.