The Redhead from Wyoming (Universal, 1953)

A lesser Western from the great year of ’53
.

The Redhead from Wyoming was director Lee Sholem’s second Western, coming straight after The Stand at Apache River, with Stephen McNally, which we reviewed the other day. Known as Roll ‘em Sholem, Lee was famous for a 40-year career in which he directed upwards of 1300 times, both on big-screen and small, without once going over schedule – a feat probably unparalleled in Hollywood history. 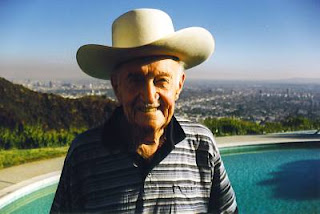 .
The Redhead was not as good as Apache River, for a number of reasons, chiefly the cast. Top billing as the red haired lady of the title went to Maureen O’Hara (she always saw to the highest billing she could get) and I have never been a Ms O’Hara fan. I’m sure she was a very nice person in real life and all but in Westerns, of which she did ten, from Buffalo Bill with Joel McCrea in 1944 to Big Jake with John Wayne in 1971, on the way famously working for John Ford in Rio Grande in 1950, she always seemed to play tiresome, strident or unsympathetic characters, so it makes it hard to like her from her movies. She comes across as bossy and/or nagging. 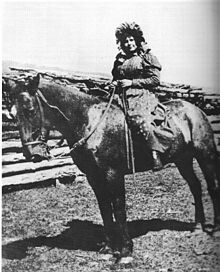 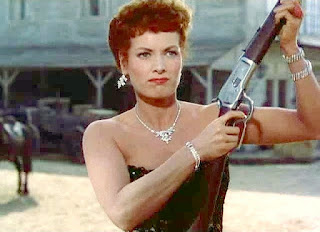 Cattle Kate 1953 version
.
Then the part of the main good guy, the sheriff, was taken by Alex Nicol. You see, he was blond. I have this theory that fair-haired men cannot be good Western leads. That’s one of the reasons Alan Ladd was so weak in the genre, and why James Arness died his Nordic hair black before becoming Matt Dillon. Nicol, who was the son of a Sing Sing warder and the matron of a detention center (that must have been a fun childhood) was good as a villain in Westerns. Think of his first sagebrush saga as the nazi US Cavalry lieutenant who wants a final solution for the Indians in Tomahawk, or his Jimmy Rapp trying to gun down Rory Calhoun in Dawn at Socorro, or indeed firing a bullet through James Stewart’s hand in Anthony Mann’s The Man from Laramie. That was where he excelled. But as a goody co-star? Nope.
. 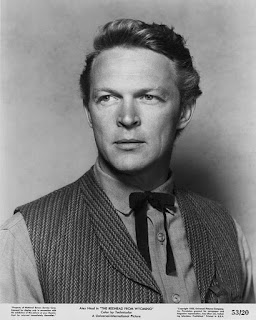 .
And then the role of the ruthless big rancher Reece Duncan was taken by Alexander Scourby, in his only big-screen Western. It’s a key part and it needed someone with profile, someone more charismatic.
.
So no, it’s not a good line-up.
.
I will however make an exception for William Bishop as the chief heavy. He really stands out in a lackluster
cast. This was the year before the start of It’s a Great Life on TV so he would soon follow a less Western path but he was already quite experienced in the saddle, starting at the top by leading in his first Western, Adventures in Silverado, for Columbia in 1948. He was good with Randolph Scott in The Walking Hills in 1949 and he was Sam Bass in the 1951 version (the George Montgomery one) of The Texas Rangers. Shortly before The Redhead he had been ‘Ike Clinton’ in another Montgomery picture, Gun Belt when George was Ringo. He is perfectly splendid in Redhead as the villainous guy in a suit with ambitions to be Governor of Wyoming. Full marks! 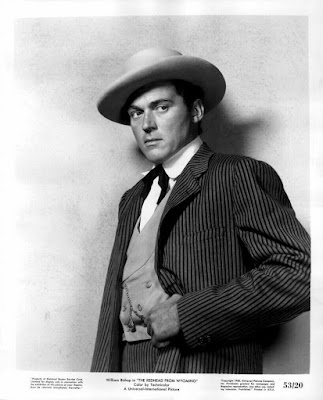 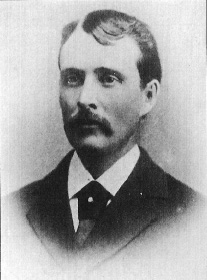 It’s nominally a Johnson County War story (though of course with 1870s hats and guns) with Bishop as Jim Averell, but a very fictional one. He is not hanged from a tree with his wife Cattle Kate in July 1889. Rather, he is a classic Western duded-up villain orchestrating skullduggery using his henchmen. Back in the day Victor Jory would have been cast. Similarly, O’Hara is referred to as Cattle Kate but she is not a cook, waitress and seamstress about whom rumors were rife that she was a prostitute (O’Hara? Perish the thought!) but rather a glam dame to whom Averell gives a fancy saloon, Kate’s Palace. The scam is that she will buy cattle, usually in return for gambling chips at the Palace, from homesteaders who claim the animals are mavericks but of course they are really rustled, and the brands changed. It’s all Averell’s idea, naturally. Kate is entirely innocent. 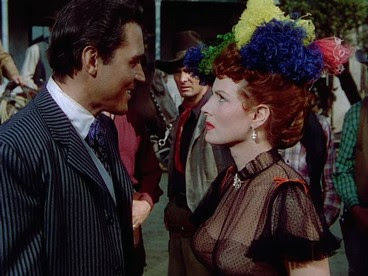 She is innocent. All the skullduggery is his doing.

.
Another weakness of the picture is the confusing plot and profusion of characters. Who are all these people? There are broadly four groups: Averell and his gang of gunmen; Kate, her loyal manservant Knuckles Hogan (Robert Strauss) and a few supporters; humble homesteaders with no real leader but kind of headed up by the Jupp brothers (Gregg Palmer and Dennis Weaver); and the above-mentioned ruthless rancher Duncan (Scourby) who is perfectly ready to shoot it out with the pesky sodbusters and has plenty of gunmen in his pay to do it. These four groups have shifting alliances and you’re never quite sure who’s fighting whom. 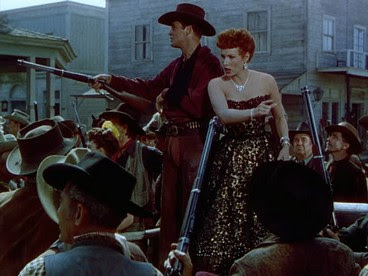 O’Hara does her bossy-boots act

.
There are gunfights, brawls, a stampede, a song, a jailbreak – much of what you would expect from a Western of this kind and period. It climaxes in a rather improbable big shoot-out in the town of Sweetwater with Averell gunned down in the saloon (inevitably, so no spoiler here) and, equally obviously, Kate and the lawman in each other’s arms.

There’s some very nice Technicolor photography of the Agoura, California locations by Winton Hoch, no less (who would win an Oscar for She Wore a Yellow Ribbon). Jesse Hibbs was assistant director and he would, as you know, go on to become a prolific director of Westerns himself, becoming one of Audie Murphy’s favorites and going on to direct episodes of very many TV Western shows. 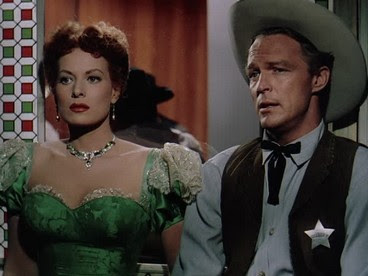 It will end in (rather unconvincing) romance

.
The Redhead from Wyoming gave Universal the honor of the first Western of that great year for our genre, 1953 (it was premièred in New York on January 8). In that annus mirabilis there were no fewer than 96 Westerns released. Oh happy day! And there were some real corkers, too. But naturally the lesser mid-budget Western also trotted on happily and this Universal effort was one of them. It isn’t bad, but it isn’t too good either. The O’Hara-Nicol pairing was not a success. Still, a shoot-‘em-up Western photographed in bright color by Winton Hoch, with an excellent duplicitous villain and mucho rootin’-tootin’, there’s a lot to like. 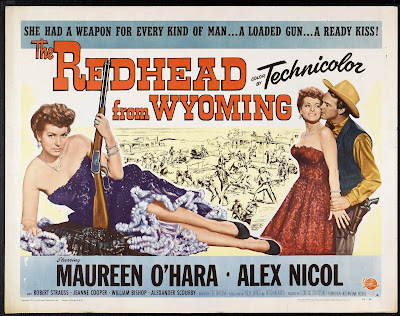