Riders of the Whistling Pines (Columbia, 1949)

Though I was and probably still am a juvenile Western fan, I was never really a juvenile-Western fan. Even as a boy I found singing cowboys rather tiresome and a bit, well, wet. The songs, which I didn’t appreciate at the time, slowed the action right down and always seemed highly improbable. Cowboys would ride the range singing, accompanied by an invisible full orchestra and sometimes a chorus (a habit brilliantly lampooned in Blazing Saddles). I also didn’t much care for the very dudish clothes they wore, gaudy chi-chi shirts, and pants tucked into over-fancy calf-boots, and such. Furthermore, my childish sensibilities were offended by the presence of automobiles and planes in Westerns. I once bought a Roy Rogers comic (I may have been eight or ten) and was deeply shocked to see Roy, sans Trigger, driving across the desert in a jeep. So all in all I tended to give these Westerns a pass. A pity, that, because I missed out on a lot. 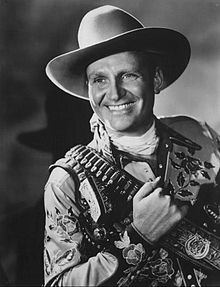 Orvon Grover Autry, 1907 – 1998, left, known the world over as Gene, was, with Roy Rogers, the most famous of all the singing cowboys. His horse Champion (like Trigger) was almost as much a celebrity as he was, and even got his own show. Radio, movies, TV, the medium didn’t matter. Gene was a huge hit. He was involved in one way or another with over 200 Westerns, from being an uncredited teamster in a Ken Maynard oater in 1934 to appearing in a TV movie celebrating the screen cowboy 48 years later. He was a singer, actor and producer. According to his biographer Don Cusic in Gene Autry: His Life and Career (Jefferson McFarland, 2010) he was one of the most important pioneering figures in the history of country music, considered the second major influential artist of the genre’s development after Jimmie Rodgers. Reader John Knight might agree? His records sold more than 100 million copies. He owned radio and TV stations, a record label, a rodeo and a major league baseball team. He is the only person to be awarded stars in all five categories on the Hollywood Walk of Fame, for film, television, music, radio, and live performance. The town of Gene Autry, Oklahoma is named in his honor and, better yet, one of the greatest ever Western museums, in LA, bears his name. He was a hero to millions, all over the world.

After starring in Mascot serials and low-budget Westerns for Republic, Autry made a deal with Columbia Pictures to release his own movies made by Gene Autry Productions. Such a one was Riders of the Whistling Pines, a 1949 extravaganza, 70 minutes of black & white but hugely popular then (and now).

Like many of these pictures, Whistling Pines was directed by John English (who was exactly that), a hugely prolific director, editor and writer who often collaborated with William Witney. In general Witney tended to concentrate more on Roy and English more on Gene. It was written by Jack Townley, who had started Westerns back in the silent days, then penned Harry Carey Sr talkies before moving on to Gene and Roy oaters (including my favorite, My Pal Trigger). 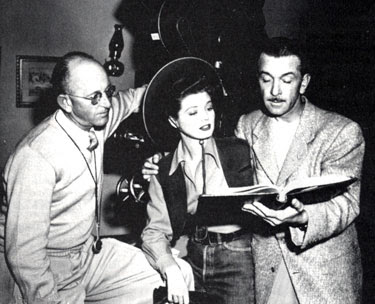 That’s John English on the right, with Gail Davis on the set of another epic.
Not sure that pose would be quite OK in these Me Too days…

It’s actually quite an ecological Western for the time. The bad guys are deforesting the place with heavy bulldozers and the like. Gene Autry (Gene Autry) and his pals are out to stop them. The villains want a moth that is killing the pines to proliferate so that they can chop down the dead trees. True, our hero leads a team spraying DDT from the air, not all that PC these days, but we are assured that only the bug will be harmed: all other livestock and wildlife will be perfectly untouched. Right. Locals complain that it will kill the fish. When one farmer says that the timber is more important than the fish, his wife stoutly rebuts, “Not to the fish, it ain’t!” Well said, Madam. 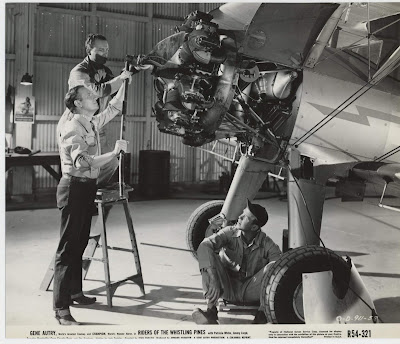 Gene has been presented with a new rifle by his pals and when he sees a mountain lion he decides this would be a good opportunity to try it out. That was probably quite OK for 1949. He misses, though, because the pals have altered the gunsights for a joke, and then he finds a forest ranger (Jason Robards Sr, no less) dead with a rifle bullet in him, and blames himself. We viewers know that (a) Gene would never kill anyone, even by accident and (b) scurrilous ne’er-do-well Bill Wright (Damian O’Flynn) has used the gunfire as a cover to shoot the ranger in the back. There’s an inquest and though Gene is exonerated of all malicious intent and set free, the man’s daughter Helen (Patricia White) is a bit miffed. Well, I guess she would be. Gene secretly gives her loads of money so she can keep on ranchin’ without Daddy. 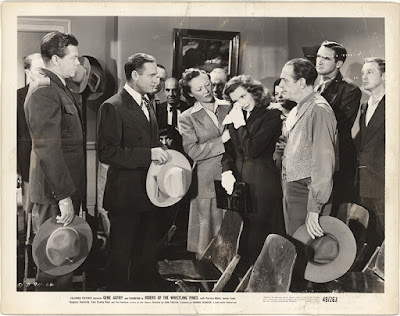 Gene offers his condolences at the inquest

There’s an alcoholic ranger, Joe (Jimmy Lloyd), whom Gene is determined not to give up on, even when he crashes one of the planes. His wife died when he was fighting in the Far East, you see, and he has never been the same since. He keeps on looking at a photo of her (she rather resembles a starlet, which is not surprising because it’s actually a photo of Marilyn Monroe, then under contract to Columbia) which she has inscribed on the back “To a swell guy”. Gene is right to have faith because Joe comes through, finding out the villains’ plan (and plane). We know he must die at the end, he’s a boozer after all, but he will do so nobly as an act of self-sacrifice, so it will be OK to admire him. 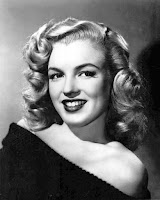 There are seven songs, eight if you count a final reprise of the irritatingly catchy Hair of Gold. You will thrill to the likes of It’s My Lazy Day, Toolie Oolie Doolie, Little Big Dry, Every Time I Feel The Spirit and Let’s Go Roaming Around The Range. Sometimes Gene sings while moseying down the trail, as one does. Sometimes people beg him to sing. Then there are parties and dances which give more opportunities. The Cass Country Boys and the Pinafores each get a go. As a boy it would have made me fume but now I find them rather jolly. 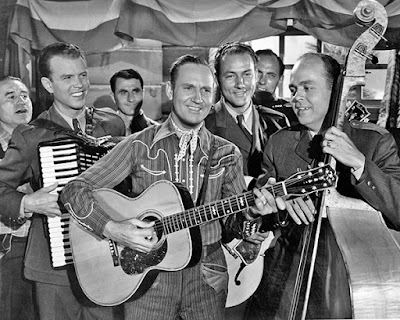 The best thing, probably, about the picture is that the 2nd Henchman, Pete, is played by a bearded Clayton Moore. This was a matter of months before the first season of The Lone Ranger would start on TV. Moore was already a regular in Republic serials and second features. Poor old Clayton, though, has to appear in scene after scene with no lines. In one scene he gets a one-word utterance, “Hello?” (They have tricked him into repeatedly answering the phone which has been cut off). Finally, in his last scene, Joe shoots him in the leg and he actually gets something to say. He must have been so proud. He does have splendid pants, though. 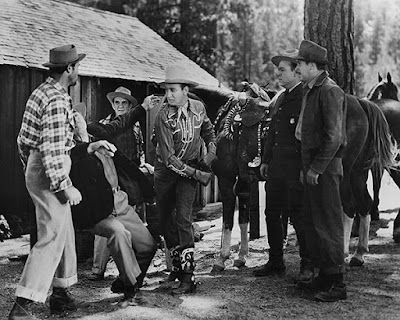 Gene deals out some fisticuffs to the bad guys. That’s Clayton on the left, in the great pants. 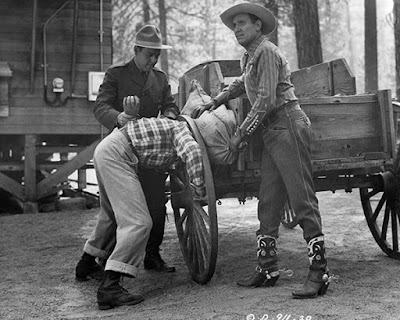 That’s how to deal with henchmen

It’s all quite gripping, in a juvenile way. And it’s certainly pacey and actiony. There are some nice San Bernadino National Forest locations. Variety was a bit snooty, saying, “John English’s direction … fails to get this one going at more than a canter.” But I thought it was rather snappy.