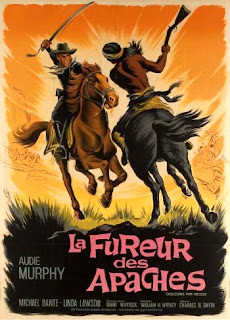 By the mid-1960s the big studios were still turning out what you might call 1950s Westerns, just with a touch more blood, but the market was going down and the days of the straight big-screen oater were numbered. Theater audiences were declining. TV was inexorably encroaching on the Western-loving consciousness. 1964 was the year of John Ford’s last (and perhaps weakest) Western feature, Cheyenne Autumn. These were the days of the ‘geezer Westerns’, when superannuated Western stars were wheeled out one last time to mount up (or more usually stay in town) and foil the dastardly schemes of some equally middle-aged bad guy. And spaghettis were just round the bend in the trail up ahead – A Fistful of Dollars was released in Italy two months before Apache Rifles made it to the screen. Still, it wasn’t all gloom and doom. Sam Peckinpah was making powerful, big (i.e. over-budget) Westerns – 1964 was between Ride the High Country and Major Dundee – and there were some glorious Peckinpah and non-Peckinpah Westerns to come – The Wild Bunch, The Shootist, et al.

Audie was still going strong, anyway. Murphy starred in three Westerns in ’64: Columbia’s The Quick Gun, released in April, Universal’s Bullet for a Badman in September, and Fox’s Apache Rifles in November (premièred for some reason in Bismarck, North Dakota). But even he was nearing the end of the trail. There would only be five more outings in the saddle. 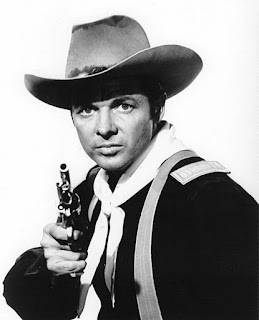 Audie was still doing his thing

Apache Rifles was a Robert E Kent production (under the banner of Admiral Pictures, which he formed with Murphy). We have had occasion to speak of Mr Kent before. He began as a rapid screenwriter for Sam Katzman at Columbia. For seven years he worked as a writer and story editor at Columbia. Then he became a producer for Edward Small. In the mid-60s he was producing deathless works of art such as Get Yourself a College Girl and Hot Rods to Hell (pictures which doubtless you revere) but he did have a good line in Westerns. He had done The Quick Gun. 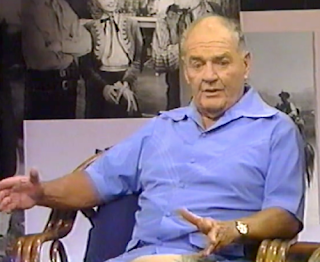 The director was William Witney (right). Ex-Mascot
serial maestro, thence to Republic, he was involved in a huge number of Westerns, starting as second unit assistant on a Rin Tin Tin epic in 1934, editing Tom Mix’s The Miracle Rider in 1935, directing Republic’s The Lone Ranger and Red Ryder serials in 1938 and ‘39, helming endless Roy Rogers and Rex Allen oaters in the 1940s and 50s, moving into TV, especially Stories of the Century and Frontier Doctor (still with Rex), occasionally directing a feature Western (often very good – try The Outcast, for example) and still directing in 1982. It was a great career. He said, “They would give us a title from the front office, and I remember a couple of ’em. One was North Of The Great Divide [a Roy Rogers picture of 1950]. I said, ‘How in the world did they get North Of The Great Divide? There is no north of the great divide.’ Now, that’s all they gave us, just the title.” He had to invent the rest. Witney has written entertainingly about Hollywood. His memoir In a Door, Into a Fight, Out a Door, Into a Chase is about his serial directing career and Trigger Remembered is a paean to Roy’s legendary steed.

Apache Rifles is an 1879 Arizona story about Victorio. Western movies liked this theme. John Wayne and Ward Bond killed Victorio in Hondo in 1953, and five years later he was killed again at Fort Bowie by a colonel while he was fighting hand-to-hand with Ben Johnson. He dies again in this one, Apache Rifles. Actually, of course he died in north-eastern Chihuahua in October 1880 when his band was attacked by Mexican forces under Colonel Joaquin Terrazas in the Battle of Tres Castillos. But that was less Western so couldn’t be allowed in movies. 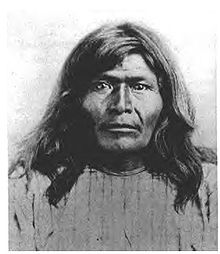 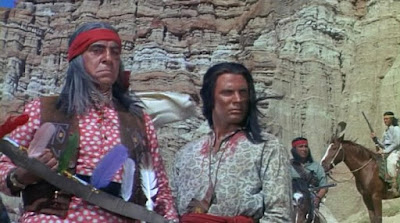 Victorio, more properly Bidu-ya or Beduiat (c 1825 – October 14, 1880) of the Warm Springs band of the Tchihendeh or Chihenne, often called a Mescalero, was one of the greatest Apache warrior chiefs.

In August 1879 he left the San Carlos Reservation and launched what became known as Victorio’s War, an astonishingly skillful raid in which he ran rings round US and Mexican army forces. He won a significant fight at Las Animas Canyon in September. In April 1880 his Apaches killed settlers in New Mexico in the so-called Alma Massacre and later he attacked Fort Tularosa. With perhaps 60 warriors he fooled 4000 men of the 6th, 9th and 10th Cavalry. 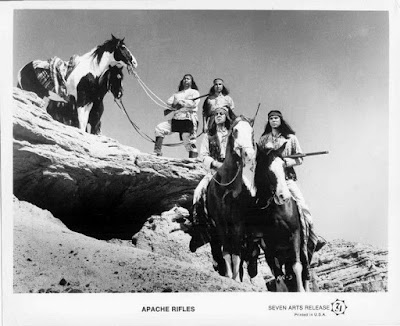 Apaches. They were always the coolest Indians, don’t you think?

In Apache Rifles, Murphy is Captain Jeff Stanton (I don’t know if he was related to the Fort Stanton Stanton; he had a good first name though), dispatched to take over command from a tired officer and bring Victorio’s renegades in. He is a no-nonsense commander whose daddy was court-martialed for being too pro-Indian and he is not getting to let that happen to him. He tells his men that they must fight like the Apache and be prepared to outlast them and outride them. He is no Indian lover, that’s for sure.

We see some signs of Apache atrocities, because now it’s the 1960s, but few of Army brutality because it’s not yet the revisionist 70s. However Capt. Stanton does manage to capture alive Victorio’s only son, Red Hawk (second-billed Michael Dante) and semi-torture him, using him as bait to attract the other Apaches in. The captain meets with Victorio (Joseph Vitale) and promises him that if Victorio goes back on the reservation he, Stanton, will move out all the gold miners in three days – an ambitiously bold, not to say impossible offer, but Victorio accepts. 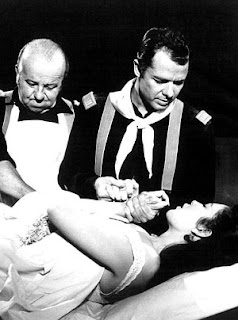 So far, so improbable and so historically inaccurate, but that’s par for the course in a Hollywood Western. And as the sage doc says in the dialogue, “Reality can be a point of view.”

Dante, who numbers a Silver Spur Award, a Spirit of the West Award and an Apacheland Spirit Award among his treasured trophies, was a regular on Western TV shows but also did the odd feature, such as Fort Dobbs in 1958 and Westbound in 1959. Vitale was one of those actors who was typecast as an Indian and was a particularly popular Native American in Bob Hope Westerns such as The Paleface, Alias Jesse James and Fancy Pants.

Now, there has to be some love interest, obviously, so we are introduced to a missionary who has gone native, Dawn Gillis (Linda Lawson). Dawn is anti-Army and pro-Apache so the relationship with the captain doesn’t start too well – also because Red Hawk fancies her – but we know, because we may just possibly have seen the occasional Western before, that Audie and Linda will end up in each other’s arms. Miss Lawson, wife of producer John Foreman, was an ex-showgirl and singer at the Sands Hotel in Las Vegas. She did TV Western shows but this is her only big-screen oater. 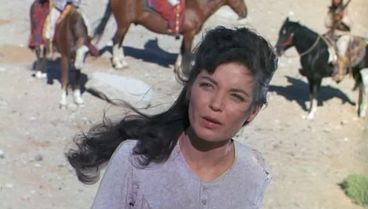 Missionary Lawson lives with the Apache

LQ Jones is one of the villains, so that’s good. The real power, though, lies in the hands of the fat and slimy storekeeper Owens (Charles Watts) who has grubstaked the miners and stands to lose out. It’s in his interests to whip up the local population (“That land belongs to us!”). These bad guys murder Red Hawk’s sidekick (if Apaches have sidekicks) and grab Red Hawk himself, proceeding to torture him. They also get LQ to assassinate the new Indian Agent (Howard Wright) by shooting an arrow into his back so that the Apaches get the blame. Such skunks. 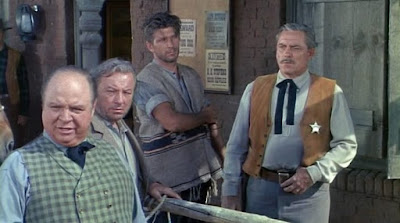 Crooked storekeeper Watts masterminds the bad guys, with LQ as henchman. The sheriff (Robert Karnes) is ineffectual and pusillanimous.
.
. 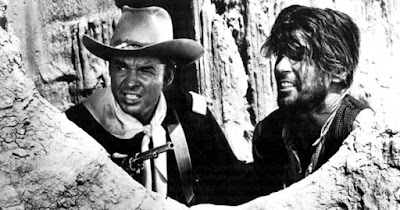 Later LQ and Audie will slug it out in a canyon

However, the bad guys aren’t the sharpest knives in the drawer because they use an Arapaho arrow to kill the Agent. Doh. This plot device was stolen, lifted directly from Columbia’s Indian Uprising (1952). In fact the two movies have suspiciously much in common. OK, that one’s a Geronimo story, not a Victorio one, but it still has a canny captain (George Montgomery in ’52) who has to fight against crooked townspeople, scheming politicians and a stupid martinet senior officer. It comes as no surprise to learn that both Indian Uprising (a Bernard and Edward Small production) and Apache Rifles were written by Kenneth Gamet.

Resourceful Audie and his tough old sergeant (an excellent Robert Brubaker with a permanent quid of tobacco in his cheek) rescue Red Hawk, so that’s good. But the situation doesn’t get much better. A new Colonel Thursday-ish commander (John Archer) arrives and he is one of those by-the-book types from the East that were traditional in cavalry Westerns, not being a man-who-knows-Indians, as our hero is, but rather giving stupid orders. Worse, the miners are now goaded by the bad guys into massacring the Apaches and, though Red Hawk survives this slaughter, la belle Dawn, the missionary, is hit by a bullet and is like to die. The massacre – quite savage and impactful, actually, with women and children being killed – sets Victorio seriously on the warpath, and the dumb colonel places Captain Audie under arrest for being an Indian lover. There seems no hope! 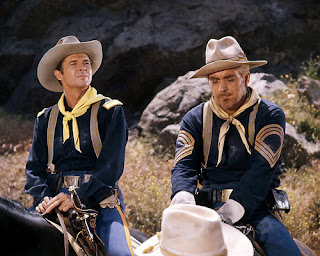 At one point the townspeople wonder why the Army doesn’t send Victorio by train to Florida, as had been done to Geronimo. Well, there was a reason. This is 1879 and Geronimo wouldn’t be exiled until September 1886. That might have been it. Still, we mustn’t be picky.

It all comes right in the end, though, as we doubted not that it would. The missionary’s life is saved by the wise doc (J Pat O’Malley) who teaches Capt. Audie some tolerance; LQ kills his boss, the fat storekeep; Audie (ignoring being confined to quarters) and LQ have quite a good fight which is punctuated by both occasionally having to hide from passing Apaches and then resume slugging it out; Red Hawk succeeds his daddy as chief and thinks peace might be a good idea; the Apaches smile approvingly at the idea of being relocated (realistic, huh?); an even more senior officer (S John Launer) arrives who is more sensible, a certain General Nelson (a sort of General Nelson A Miles, perhaps); Audie is promoted to major, and gets the gal; and they all lived happily ever after, The End, hope that wasn’t a spoiler. 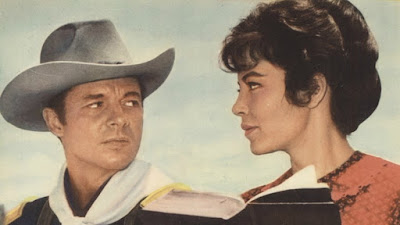 He gets the missionary, bible and all

Well, I enjoyed it anyway.

At least it’s quite pro-Indian (Gamet had written the original two years after Broken Arrow) and the white racist bigots are the bad guys. There are also nice Mojave and Red Rock Canyon locations photographed by Archie Dalzell, who had started in Westerns on the color remake of The Virginian in 1946, worked on Streets of Laredo, Hellgate, Arrowhead and many feature Westerns before turning to TV work. The music by Richard LaSalle is good enough for the odd strain to remain in your head afterwards.

My DVD, though, had a very bad picture quality. Most disappointing. There is a Sidonis Calysta DVD and I probably should have got that. It would have those annoying subtitles you can’t turn off but normally the picture quality is very good.

All in all, a good 50s-style Western a bit out of its time, and certainly not Audie’s best, but I liked it. Easy to please, that’s me.

PrevPreviousGeronimo in fact and fiction
NextRiders of the Whistling Pines (Columbia, 1949)Next

PrevPreviousGeronimo in fact and fiction
NextRiders of the Whistling Pines (Columbia, 1949)Next
Jeff Arnold © 2022 – All rights reserved – Designed by BetterCallChris
Scroll Up