The Indian chief is the good guy

Hinmatóowyalahtq̓it, better known as Chief Joseph (1840 – 1904), leader of the Wal-lam-wat-kain (Wallowa) band of Nez Perce, is regarded by many as one of the greatest of all the Native American chiefs who resisted white American confiscation of their lands, ranking with the likes of Sitting Bull, Crazy Horse and Geronimo as a hero of his people.
.
. 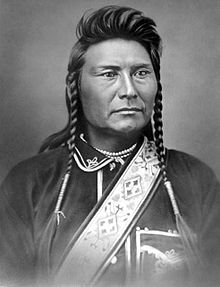 He has appeared occasionally in Western stories and movies, and even on Broadway, in the stage play Indians. He figures in Will Henry’s novel of the Nez Perce War, From Where the Sun Now Stands (1959), a book which won the 1960 Western Writers of America Spur Award for Best Novel of the West. But probably the best-known screen portrayal of Chief Joseph and the so-called Nez Perce War was the TV movie screened by ABC in 1975 which also takes as its title some of Joseph’s words of surrender, I Will Fight No More for Ever.

The picture came when the influence of Dee Brown’s 1970 book Bury My Heart at Wounded Knee was very strong and the American Indian advocacy group AIM was in full voice. Films started to show white American expansionism from the Indians’ point of view, and big-screen pictures like Little Big Man or Soldier Blue (both 1970) were not shy about depicting the slaughter of innocents by half-crazed Army officers. A necessary corrective, you may well say, though they blatantly overdid it.

Of course, they were still ‘white’ movies and though they showed the often appalling injustice of the treatment by settlers and the Army of the occupiers of the land the whites wanted, there was always a tinge of the patronizing about them – and the luridly sensational. Still, I Will Fight No More was a worthy effort and it even managed to portray the Army officers sympathetically, while still being four-square on the side of the Nez Perce.

General Oliver Otis Howard (1830 – 1909) was a career Army man who had distinguished himself on the Union side in the Civil War, losing his right arm. Known often as ‘Bible Howard’ or ‘The Christian General’ because he tried to base his policy decisions on his deep religious piety, he was given charge of the Freedmen’s Bureau in mid-1865, doing his best to ameliorate the conditions of liberated slaves in the South. He negotiated a treaty with the Apache Cochise in 1872. In 1874 he took command of the Department of the Columbia, and his campaigns against the Nez Perce in Oregon, Idaho and Montana made him one of the best-known (though also most criticized) soldiers of the Indian wars. 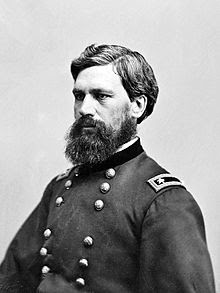 He is played in this movie by the excellent James Whitmore, a first-class Western actor who had started in the genre as one of the Reb soldiers who escaped with Joel McCrea in The Outriders in 1950, and was, for me, memorably good as the crusty sergeant in the Guy Madison picture The Command in 1954 and as one of the sympathetic trio of trappers in The Last Frontier in ’55. I Will Fight No More was his last Western, more’s the pity. 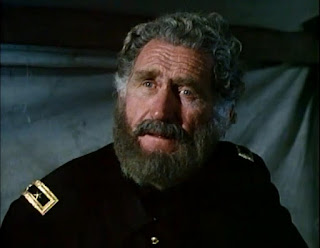 His aide-de-camp is Captain Wood, played by second-billed Sam Elliott. Elliott today is a kind of symbol of the grizzled cowboy (as viewers of The Ranch will know) but he came to Westerns just too late to be a big-screen star in the genre. He had been Missouri Townsman (uncredited) in The Way West in 1967 and Card Player #2 in Butch Cassidy and the Sundance Kid in ‘69. His first leading role in a Western was in the minor Molly and Lawless John in 1972, and this was his first big Western part after that. In 1979 he would appear in NBC’s The Sacketts and come to dominate the TV-movie Western but by the time of I Will Fight No More he had some rep as a Westerner. His Captain Wood is the classic Man Who Knows Indians, sympathizing with the Nez Perce and speaking their language. He tells Howard that the government should “Treat the Indians like human beings [he probably meant as human beings] and recognize their rights.” 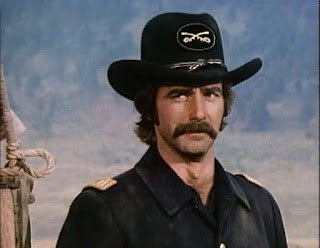 Sam is the Man Who Knows Indians

Playing Chief Joseph is Ned Romero, only third-billed in the cast but at least shown on the DVD cover. Romero was a regular on Western TV shows (he did six episodes of Shane) and he was the Indian Wild Bear in the TV-movie remake of Winchester ’73, which we reviewed recently. He also had small parts in Hang ’em High and Tell Them Willie Boy is Here. He’s good as Joseph, showing the dignity, intelligence and tactical savvy of the chief. 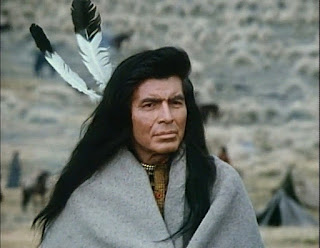 In 1877 President Grant, abrogating earlier treaties which guaranteed the Nez Perce their land for ever, gave the people only thirty days to move out completely to a distant reservation in Idaho. It was brutal and peremptory. Joseph expressed his “[disbelief that] the Great Spirit Chief gave one kind of men the right to tell another kind of men what they must do.” Howard reacted angrily, interpreting the statement as a challenge to his authority. Howard told Joseph he would consider Nez Perce presence in the Wallowa Valley beyond the 30-day mark an act of war. Though angry and near despair, Joseph at a council advocated going to the reservation.

In the movie Howard is shown as ordering this removal unwillingly, obeying orders reluctantly, and, in a rather cheesy moment, he gives Joseph a toy buffalo his wife has made for the child that Joseph’s wife Toma (Linda Redfearn) is soon to bear. But certainly the Nez Perce could see little sign of reluctance, and anyway, the result was the same for them.

In reality, Too-hul-hul-sote or Toohoolhoolzote, named as spokesman for the different Nez Perce bands, argued cogently for more time but Howard replied, “I do not want to hear you say anything more like that. I am telling you! Thirty days you have to get on the reservation.” Toohoolhoolzote does not appear in the film and instead we get Wahlitits (John Kauffman) who is the firebrand arguing for war against the statesmanlike chief for peace, in a well-known Hollywood trope.

In the end, in this movie version of history, conflict is provoked by stupid white settlers who disobey orders and fire upon the Nez Perce as they approach under a flag of truce. Joseph now has no choice but to fight, and he plans a long march to join Sitting Bull in Canada. Howard pursues and an epic chase ensues, with Joseph outwitting the Army at every turn. The soldiers shoot women and children and use a howitzer against the Indians: they are clearly the bad guys here.

Interestingly, we get three (uncredited) journalists who interview an angry Howard and follow the long pursuit, reporting it for the Eastern papers, and they tell the general that as time has gone on, Joseph has become a hero to the reading public. Coming so soon after (according to the yellow press’s version) “Sitting Bull slaughtered Custer”, that was remarkable, but it does indeed appear that people were increasingly on the side of the Indians. Joseph became known as “the Red Napoleon”.

More recently it has been said that Joseph was not technically a war chief and probably did not command the retreat at all. Francis Haines, in a 1954 article, Chief Joseph and the Nez Perce Warrior, argued that the battlefield successes of the Nez Perce during the war were due to the individual prowess of the Nez Perce men and not that of the fabled military genius of Chief Joseph. Haines supported his argument by citing the splendidly-named frontiersman Lucullus Virgil McWhorter (1860 – 1944), who concluded “that Chief Joseph was not a military man at all, that on the battlefield he was without either skill or experience”. Maybe that was so. I’m not enough of a military historian to say, or any kind of historian come to that.

A voiceover narration gives a faux-documentary sheen to the movie. We get the famous incident in Yellowstone National Park when tourists are held hostage but Joseph lets them go after telling them his plans, knowing that what he says will get back to the authorities.

Later we get Colonel Nelson A Miles (also an uncredited actor) appearing in his famous bearskin coat, driving the Nez Perce down from the North and preventing their getting to Canada. 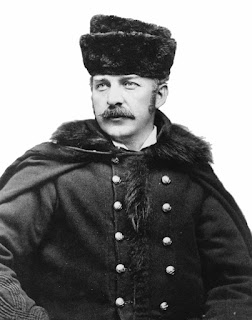 The remaining Nez Perce are surrounded, Chief Joseph tells his followers, “It is finished” and he makes his famous speech of surrender to Howard (in reality he surrendered to Miles):

I am tired of fighting. Our chiefs are killed; Looking Glass is dead, Too-hul-hul-sote is dead. The old men are all dead. It is the young men who say yes or no. He who led on the young men is dead. It is cold, and we have no blankets; the little children are freezing to death. My people, some of them, have run away to the hills, and have no blankets, no food. No one knows where they are—perhaps freezing to death. I want to have time to look for my children, to see how many I can find. Maybe I shall find them among the dead. Hear me, my chiefs! I am tired; my heart is sick and sad. From where the sun now stands, I will fight no more forever.

The film ends there. The popular legend of the noble surrender was deflated, however, when the original pencil draft of the report was revealed to show the handwriting of the later poet and lawyer Lieutenant Charles Erskine Scott Wood, who claimed to have taken down the great chief’s words on the spot. In the margin it read, “Here insert Joseph’s reply to the demand for surrender”.

Though Howard and Miles apparently argued for clemency and leniency, General Sherman overruled them and ordered Joseph and 400 followers to be taken on unheated rail cars to Fort Leavenworth, Kansas, where they were held in a prisoner-of-war campsite for eight months. Toward the end of the following summer, the surviving Nez Perce were taken by rail to a reservation in the Indian Territory (now Oklahoma); they lived there for seven years. Many of them died of epidemic diseases. 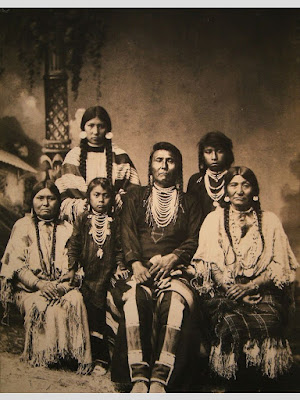 Joseph lived on, in his last years speaking eloquently against the injustice of United States policy toward his people. In 1897, he visited Washington, DC to plead his case. He rode with Buffalo Bill Cody in a parade honoring former President Grant in New York City, but he was more a topic of conversation for his traditional headdress than for his mission. Everywhere he went, it was to make a plea for what remained of his people to be returned to their home in the Wallowa Valley, but it never happened, though he was allowed to go to Idaho. He died in September 1904, still in exile from his homeland. 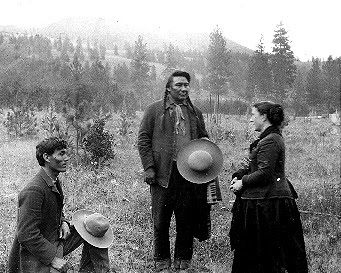