Back in March last year I reviewed a novella by Max Brand, Twelve Peers, which became the basis for various screen versions of Destry Rides Again. But I thought that as Brand played such a key part in the history of the Western, it was only fair to give him a bit more limelight. So today here’s a word or two on one of the most famous and certainly most prolific of Western writers.

Brand’s real name was the infinitely superior Frederick Schiller Faust (wow!) Though most famous as Max Brand, he also used many aliases, or perhaps I should say noms de plume, such as George Owen Baxter, Evan Evans, David Manning, John Frederick, Peter Morland, Frederick Frost, and more. He was a leading light in the pulp magazine Western Story and rarely did an edition hit the newsstands without at least one and often several stories by him in it. 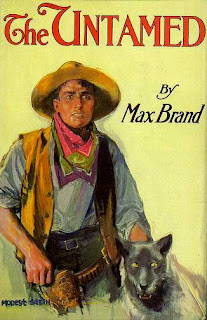 In his early writing career was clearly greatly influenced by Zane Grey. In fact his editor, Robert H Davis, gave him a copy of Riders of the Purple Sage (1912), recommending it as the kind of best-selling novel to emulate. Faust’s first full-length novel, The Untamed, was published in 1919 and owed quite a lot to Grey. It introduced Faust’s character Whistlin’ Dan Barry, who captures and breaks Satan, the wildest horse in the West. Later there would be The Night Horseman (1920), The Seventh Man (1921) and Dan Barry’s Daughter (1923).

However, when Western Story magazine was launched that same year – Faust’s first appearance in it was in 1920 – his writing took a different turn. Grey, though in some ways the inventor of the popular Western, was prolix and one of the Writers of the Purple Prose. Much of his work was long-winded, larded with lengthy descriptions of landscape and inferior in craftsmanship. Readers of Western Story had no time for such fanciness (or length). They wanted tough heroes, evil villains, the occasional fair maiden to be rescued and above all, action, action; action. Faust responded – with aplomb. 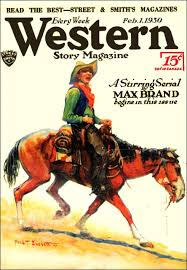 In the early 20s the circulation of Western Story reached 300,000 weekly – in those pre-TV days that’s where people got their thrills. By the end of 1925 Brand (let’s call him that, for he never used his own name in the magazine) had placed 120 stories, some of novel length, in the mag. Words flowed from his typewriter with astonishing speed. He often averaged a complete novel every three weeks. In one thirteen-day period he wrote one serial and two long novellas. He wrote in various genres (he was the originator of Dr Kildare) but three-fifths of his work was Western. In his career he wrote perhaps 300 Western novels and, in all genres, about 30 million words. It’s incredible to us today.

Although Brand wrote ‘pulp’, it wasn’t trash. He was an educated man (he’d been thrown out of Berkeley for drunkenness) who had literary aspirations. “So it will be when we are dead that perhaps our lives will stand for something.” He also said, “All that can save fiction is enormous verve, a real sweep, plus richness of character, blood that can be seen shining through,” and he did his best. He lived in Italy and longed to be taken as a great poet, but his poems were sadly uninspired and rather turgid. “Have recently sent thirty-eight poems to our leading magazines and received thirty-eight poems back from our leading magazines. Why is my verse so difficult, so dead, so dull to other people?” Poor Max. 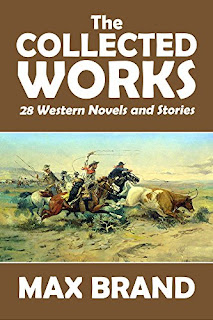 But he was a realist. He was sometimes dismissive of the Western writing he did for a living. He called it “Western stuff” or “cowboy junk”. Talking of one of his serials, he said, “Of course, it’s melodramatic junk … you know the stuff … One of these days we will start better fiction.”

Unlike Grey, Brand avoided descriptions of setting, just telling us that the story is set “in the West”. Nor did he bother with any details of authentic Western life. Sometimes his heroes are even more invincible than Grey’s Lassiter. They seem superhuman and can beat any number of opponents in a fight. The love interest is muted. Pulp magazine editors wanted some romance but the heroine had to be secondary. But he avoids Grey’s sickly sentimentality. His terse style and lively sense of narrative carried his readers along. His Westerns were not just blood-and-thunder dime-novel stuff. I think his novellas in particular (Twelve Peers is one such) are the best because they are short and sharp. Furthermore he had a dry sense of humor, which was sadly lacking in Zane Grey.

It wasn’t only Destry: 39 Western movies or TV shows were made using a Max Brand story as a starting point (though often greatly changed), starting with Lawless Love in 1918 (sounds a gripper) and ending with the spaghetti-style title Shoot First and Pray You Live (Because Luck Has Nothing to Do with It) in 2008. 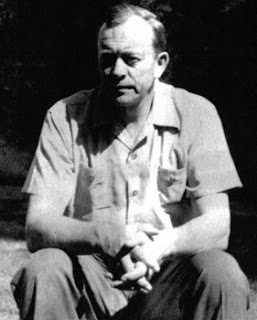 In the early 1940s Brand wrote thirteen novels in the Silvertip series, and they were extremely popular (and still are, judging by Goodreads comments). But in early 1944, when Brand was working at Warner Brothers, and met Colonel Nee, who was a technical advisor sent from Washington DC, Brand told Nee of his desire to be assigned to a company of infantry so he could truly experience the war and later write a great war novel. Nee said he could fix it for him and some weeks later he did, getting Faust an assignment for Harper’s Magazine as a war correspondent in Italy. While traveling with American soldiers fighting in Italy in 1944, Faust was mortally wounded by a piece of shrapnel which lodged under his heart.