Massacre Canyon was another Wallace MacDonald-produced Western starring Philip Carey. MacDonald had used Carey the year before in The Nebraskan and would do so twice in ’54, Massacre Canyon, released in May, and The Outlaw Stallion, released in July, both directed by good old Fred Sears. Then there would be Wyoming Renegades in 1955 and Return to Warbow in ’58. So the producer clearly liked Phil. Rightly, because Carey was suited to the genre.
.
. 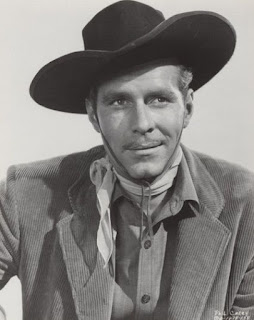 MacDonald’s Westerns were a mixed bag, ranging from the enjoyable mid-budgeter (The Nebraskan) to the pretty dire C-Western (Gunmen from Laredo). But Carey always improved the ones he was in – even saved them. He had a big screen ‘presence’ and authority. Tall and rugged, he look right in Western roles, and was especially good as the charismatic baddy, such as in Raoul Walsh’s Gun Fury in 1953. Time and again he was an Army officer, and Massacre Canyon is no exception. We first see him out of uniform, drunk and brawling in some squalid cantina, and we think he’s going to be the villain, especially as we’ve already been introduced to Douglas Kennedy as tough Sergeant Marlowe, and he’s going to be the hero. But once Phil dons his Union blue and reveals himself as Lieutenant Faraday, he shapes up (and sobers up) and it will be he who saves the day from the marauding Apaches. 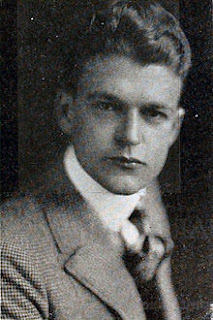 Wallace MacDonald back in his silent movie days

Kennedy was another big, powerfully-built man, who often appeared in both Westerns and thrillers as the bad guy. The year after Massacre Canyon he would become Steve Donovan, Western Marshal on the small screen but by the time of the MacDonald oater he was already mighty experienced in the saddle. 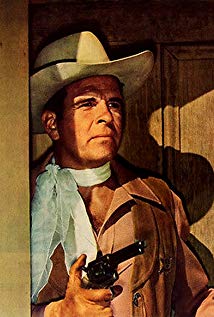 Playing a character named Marlowe opposite Carey in Massacre Canyon was quite a coincidence because Philip Marlowe would be Carey’s role in 1959 – 60 on TV. 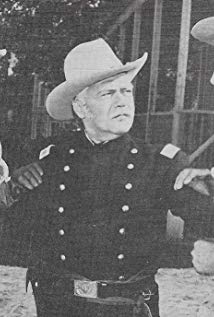 Fred in a Durango Kid oater

Fred F Sears had been a Western actor (the picture above shows him in the Durango Kid picture Fort Savage Raiders in 1951, and he started directing Charles Starrett soon after; the photo below shows him as director). He spent his entire career at Columbia and was a favorite of quickie producer Sam Katzman because he brought in his films on time and under budget. He made juvenile-delinquent crime films, rock musicals, action thrillers and sci-fi ‘epics’ like Earth vs. Flying Saucers, but he also specialized in Westerns. He did Ambush at Tomahawk Gap and The Nebraskan for MacDonald in ’53, and he would direct Outlaw Stallion and Wyoming Renegades later. He also helmed the occasional quite classy oater (I think) such as Utah Blaine with Rory Calhoun. Sadly he died in 1957 of a heart attack, aged only 44. 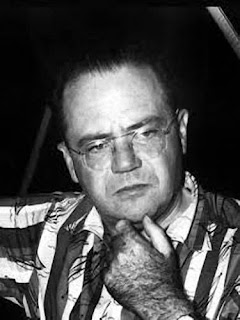 Fred behind the camera

Massacre Canyon is a Geronimo story – or at least that is what we are led to believe. The Apache leader is mentioned twice in the opening speech and the plot centers around a cargo of Henry rifles that is being brought to the fort and which must not, at any cost, fall into the hands of the Indians. “If Geronimo gets his hands on ‘em, we can all cut our throats.” However, very soon the story morphs into a non-Geronimo one: the fearsome Indian chief who is the villain of the piece is a certain Black Eagle (Steve Ritch, who wrote some Wagon Train episodes and was also the Indian Sharp Knife in a few), who broke away from Geronimo’s band with his renegades and is now terrorizing the area.

There’s a good title screen at the start, when arrows thud into the name of the movie. 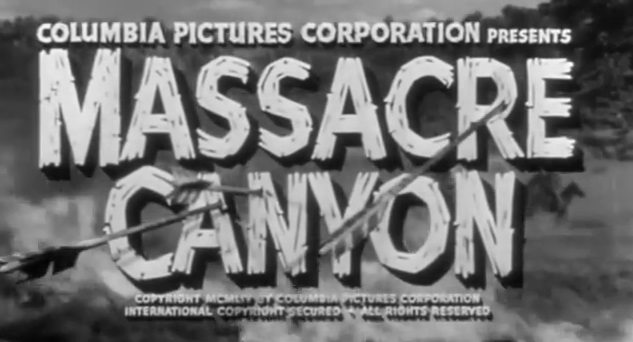 The fort is Fort Collins, as the actors often say, though it says Fort Collier on the poster. Fort Collier was a Confederate redout in Virginia. Lt Gen. Jubal Early used it as part of his defensive works in the 3rd Battle of Winchester. So I’m not quite sure what it was doing out West, in Arizona or New Mexico. Perhaps it was purchased, moved and reassembled, like London Bridge. Fort Collins, on the other hand, was a Union post built in Colorado in 1864 and it became a boom town in the 1870s. It must be that one. Actually, we never see the fort, and this is not a ‘cavalry Western’ per se.

One of the forts anyway

Sgt Marlowe, in plain clothes (i.e. range duds) has charge of delivering the invaluable arms shipment to Fort Collins/Collier. With him are the angry, belligerent and grumpy Private Peaceful Allen (Guinn ‘Big Boy’ Williams in a classic Big Boy part) and Pte George Davis (Ross Elliott), who was a major but was busted to the ranks for cowardice. Marlowe believes in him. Marlowe’s dad was shot by the army, which only later realized he was innocent, so he wants to give Davis a second chance, you see. 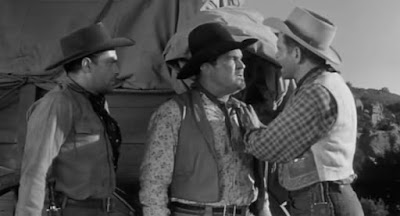 Privates Davis and Allen with their boss, Sergeant Marlowe

The sergeant has put in his papers for a commission and is confidently expecting to become ‘Mr Marlowe’ very soon. Imagine his disappointment, therefore, when he learns that Lt Faraday has been appointed to the post and he, Marlowe, must remain a humble NCO. This adds fuel to his resentment of Carey’s character, as if the lieutenant’s drunkenness and generally being a lout were not enough. 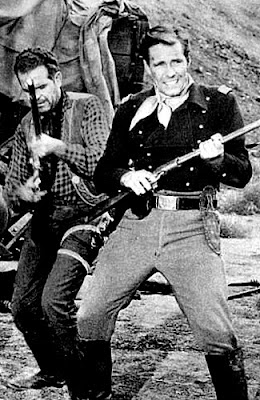 They come to Spanish Gap, a way station run by the drunken and slobbish Gonzalez (Mel Welles) and his Apache wife Gita (Charlita, from that great epic Bela Lugosi Meets a Brooklyn Gorilla). There is a no-good peddler (or pedlar) there, one ‘Parson’ Canfield (Ralph Dumke). Now this traveling salesman is a lowdown skunk because he wants to appropriate those Army 15-shot repeater Henrys and sell them to the Indians, and as you well know, dear movie-lover, selling guns to the Indians in Westerns is situated on the scale of criminality and awfulness somewhere between matricide and cannibalism. Gita says she can arrange the sale but then she double-crosses the parson and stabs him in the back, which isn’t very sporting.

The parson had with him two fair maidens (well, perhaps they used to be) whom he was aiming to sell off as wives (it’s 1954 so they couldn’t be hookers). They are blonde Flaxy (second-billed Audrey Totter) and brunette Cora (Jeff Donnell). Flaxy sets her metaphorical cap at Lt Faraday, while Cora is determined to wed Peaceful. The lieutenant seems quite taken with the idea but Peaceful is more doubtful. At any rate, the ladies now join the party. Ms Totter was often a hard-bitten moll in gangster flicks but she did some Westerns too. In fact she had been the Woman They Almost Lynched in 1953 (a Western that we shall soon be reviewing, you will be ecstatic to hear) and would later co-star with Scott Brady in The Vanishing American. In 1958 she would become Beth in Cimarron City. Jeff Donnell, who, unlike me, took her first name from 50% of the duo with Mutt in the cartoon strip, had a father who ran a boys’ reformatory and a mother who was a schoolteacher. But she survived. She occasionally got minor parts in A-pictures though she was usually, according to the IMDb bio, a “breezy girlfriend or spirited bobbysoxer.” But she too did the odd Western and you can spot her in the Tim Holt classic Stagecaoch Kid or as one of the lady soldiers Audie Murphy trains up in The Guns of Fort Petticoat. 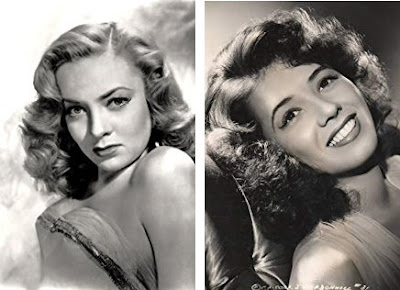 There’s a vague attempt at a backstory and a bit of character development when we learn that Lt Faraday is a drunk because his girl died a year ago, and Flaxy is an actress who has descended to mail-order bride status in desperation (the lieutenant suggests she could become the schoolmistress at the fort, because of course schoolma’ams were respectable whereas actresses were, er, not). But it’s just a line or two of dialogue and it isn’t taken any further. It’s a token nod to a slightly better kind of film. The screenplay was by David Lang, who spent most of his time on Western TV shows, though he wrote a few big-screen oaters, including several for MacDonald.

It’s a 66-minute black & white B-Western, clearly meant as a second feature, but that doesn’t mean it’s junk. It does have its points. 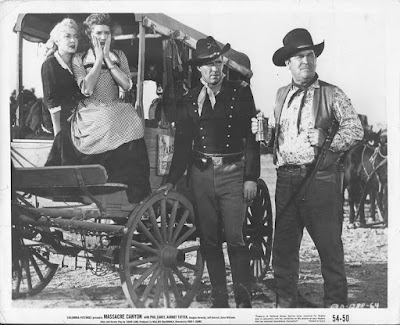 They see the horrible massacre

There’s an action finale in which Pte Davis shows enormous courage and self-sacrifice (as he was bound to do) and there’s a stalwart defense of the wagons with the whooping Indians riding round and round them in a circle being shot off their horses, as usually happened. Why Indians would ever be that stupid was never satisfactorily explained. Of course the defenders had those Henry rifles while the Apaches have bows and arrows. Dynamite comes into it, too, and a tunnel through the rockface. You may guess who wins.

The locations are the usual ones of the Simi Hills, the Iverson Ranch and the Bronson Caves in Griffith Park, LA. We recognize them fondly. The DP was Lester White. There’s a dust storm (MacDonald liked those). 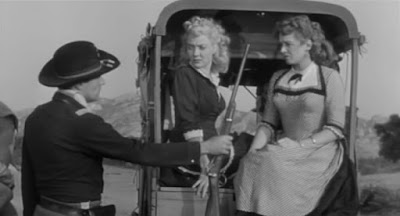 It’s all harmless fun, at least if you don’t mind seeing horses driven too fast or Apaches treated as nameless savages to be shot down. It’s not great art, and I don’t think Kurosawa, Bergman or Welles would have been furiously jealous of Fred. Still, if you go for minor early-50s low-budget black & white B-Westerns (and why are you reading this blog if not?) this could be for you.

PrevPreviousGunmen from Laredo (Columbia, 1959)
NextAmbush at Cimarron Pass (Fox, 1958)Next

PrevPreviousGunmen from Laredo (Columbia, 1959)
NextAmbush at Cimarron Pass (Fox, 1958)Next
Jeff Arnold © 2022 – All rights reserved – Designed by BetterCallChris
Scroll Up