I’ve grown to appreciate Philip Carey in Westerns. Tall and rugged, he suited the genre, especially as bad guy (he was blond so not suitable for goody roles). He started with John Wayne in a submarine drama in 1951 but his first Western outing was as the Army captain in Springfield Rifle, Warners’ rather pedestrian Gary Cooper oater of ’52. He was also an Army man, the dashing young lieutenant, in Calamity Jane in ’53, and he would don the Union blue yet again in The Man Behind the Gun the same year (promoted back to captain). He stole the show as the charismatic but crazed badman in Gun Fury that year too, and (he was busy out West in ’53) he led for the first time in an oater in The Nebraskan, in which he was a brave and resourceful Army scout in buckskin fending off a siege of the Sioux. It really was an excellent start in the genre.
.
. 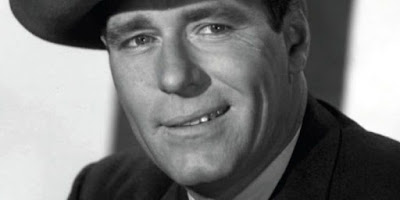 He led again, twice, in 1954, in Massacre Canyon and The Outlaw Stallion, and he was yet again an Army officer (he was getting typecast) in They Rode West that year as well. He did a lot of TV Westerns too (later he would be the tough captain of Texas Rangers in Laredo) but he continued with the big-screen version. By ’58 and Return to Warbow he was very experienced in the saddle. He was always better as bad guy and I like Westerns in which the headline star is a baddy.

The decent but dull goody he comes up against is Andrew Duggan. Duggan’s Westerns were mostly TV shows but before he became Lancer for two seasons on NBC, he did do some feature Westerns. He was the sheriff in Decision at Sundown and the villain in Westbound, both for Budd Boetticher. He was the smoothie we all at first take for the villain in Domino Kid with Rory Calhoun (another picture directed by Ray Nazarro). He was the rather sickly-sentimental goody padre in The Bravados with Gregory Peck. Like Carey, he was better as the baddy, and his character in Return to Warbow is, I am afraid, one-dimensional and uncharismatic. 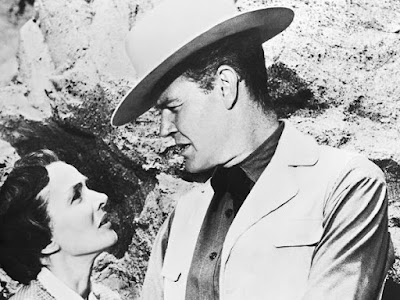 Duggan is dull goody, McLeod is his loyal wife

Return to Warbow was based on the 1955 novel by Les Savage Jr. Savage himself did the screenplay and it is said (I have not read the book so I can’t vouch for this) the writer adapted the story for the screen by cutting out all the good bits. 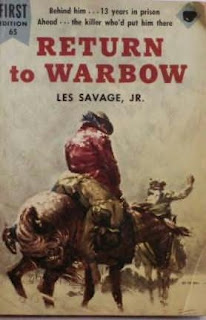 The plot of the movie is briefly summarized: convict at the Yuma Territorial prison in Arizona Clay Hollister (Carey) leads two other felons, the excellent Robert J Wilke (the eternal heavy) as Red and a young slightly James Best-ish William Leslie as Johnny, in a violent escape (stuntman and character actor Fred Graham was one of the guards they do in). Eleven years ago Clay robbed a stage near the town of Warbow with his brother Frank and killed a man. Now he wants to get back to the town and recover his part of the loot. Red and Johnny go with him for a share but they are already planning to double-cross Clay and divide the plunder between themselves. No honor among thieves. 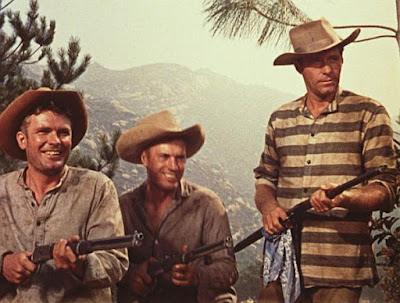 The three escapees, happy to be out

Now, Murray Fallam (Duggan) was the owner of the stage line that was held up. He has married Clay’s sweetheart, Kathleen (Catherine McLeod) and adopted the son who, it turns out, was really Clay’s. So there are other motives for conflict.

Clay’s brother Frank has become a drunk and a wastrel. He is played by the excellent and slightly cadaverous James Griffith, a favorite Western actor of mine. The trouble is, for the plot development anyway, we are told early on that Frank has gambled and drunk all the stolen money away, and the stash is no more. After that, the story doesn’t have anywhere much to go. 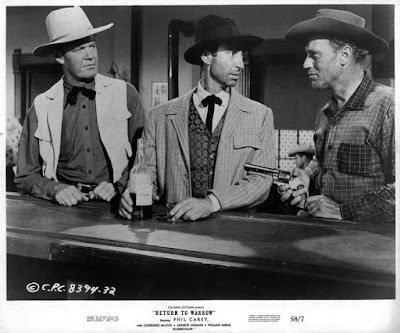 There’s a sheriff (Francis De Sale) and Harry Lauter is one of his deputies. They brace themselves for the return of Clay, for they know he has broken out of Yuma, and the lawman says he wants Clay “dead or alive” (the script has quite a few clichés in it).

Well, the criminal trio descend on the Fallam ranch and take the wife and boy hostage, the swines. The Fallams have an Indian ranch hand and good news, it’s Jay Silverheels. He was blinded by Clay in the hold-up but he is still pretty feisty in opposing the villains, and later he will save the day (my lips are sealed as to how).

The boy (Christopher Olsen) is one of those plucky lads beloved of Westerns, especially the juvenile ones, and he is brave and resourceful, and he too will contribute to the (inevitable) downfall of the bad guys. 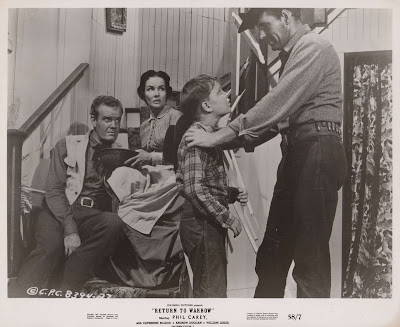 The family held hostage. But Clay won’t hurt his son.

The badmen go to town secretly and manage to get Frank out of the saloon but they are spotted by the law and a gun-battle ensues in which Frank is hit. But don’t worry, “it’s only a flesh wound.” Clay is arrested but Bob Wilke breaks him out of jail (it’s becoming a habit).

There’s a finale in an old mine, with cave-ins, obviously. We know the villains will fall out and set to shooting each other, which they duly do, and we also know, because it was the Hollywood code, that the bad guy cannot survive (even if he shows some good traits) for crime must not pay, and Clay shall perish (no spoiler here, I think). 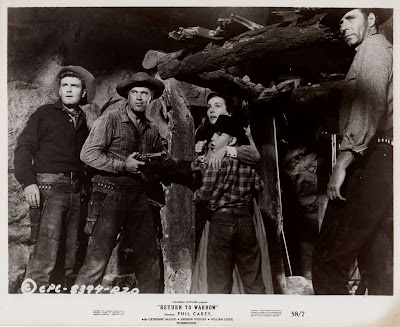 Showdown in the old mine

It’s all rather routine, I fear, and though in nice Technicolor was pretty standard fare. The novel’s Montana winter setting was transposed to the usual Columbia Western town and sunny Simi Valley locations, doubtless for budgetary reasons. Carey saves the picture (with no help from the stodgy rest of the cast except Griffith and Silverheels). It’s a rather ordinary Western, I’d say.

Director Nazarro was an honest workman or, if we are being unkinder, a Columbia hack – he churned out dozens of the studio’s oaters, including many in the Durango Kid series with Charles Starrett. I approve of him, though, because he helmed a Western I like, Kansas Pacific. 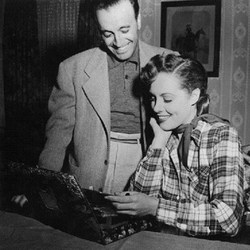 The producer was Wallace MacDonald, who also did The Nebraskan and another Western the year after Return to Warbow, Gunmen from Laredo, which, you will be thrilled to hear, we shall soon be reviewing. 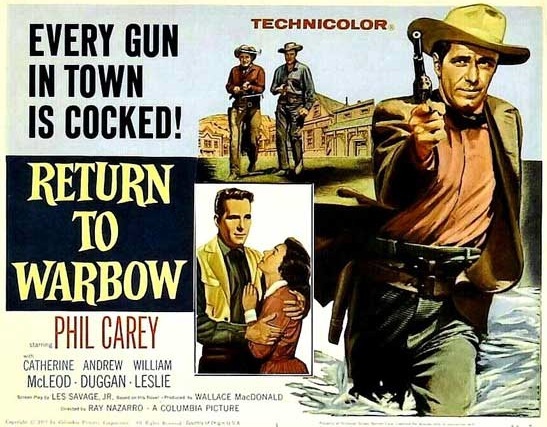