What a great title

Our first Western of 2019 has almost the perfect title: The Toughest Gun in Tombstone. A late-50s black & white George Montgomery oater with a name like that, what could be better? 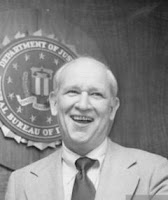 It was a Robert E Kent production, under the name of Peerless Productions. Kent (pictured left) started writing Westerns with the John Payne picture King of the Lumberjacks in 1940 and the Youngers tale Bad Men of Missouri in ’41, often then working for producer Sam Katzman, including on several George Montgomery ones, The Pathfinder (1952), Fort Ti (1953) and Seminole Uprising (1955). Kent’s first Western as producer himself was the rather good Utah Blaine with Rory Calhoun, released in February 1957, but his second, third and fourth were all George Montgomery oaters, Gun Duel in Durango, another goody titlewise (May 1957), The Toughest Gun in Tombstone (May 1958) and Badman’s Country (August 1958). So it was an experienced team.

It was, nominally, an early 1880s clean-up Tombstone story, with Ike Clanton, Johnny Ringo and Curly Bill Brocious as villains, but there are no Earps in sight. Instead, the cleaner-uppers are the new Arizona Rangers, led by Captain Montgomery. Actually, the Arizona Rangers were created by the Arizona Territorial Legislature in 1901, and disbanded in 1909, but there were earlier prototypes, policing the mining camps in the late 1850s, and after the establishment of the Confederate Arizona Territory in the 1860s, Territorial Governor John Robert Baylor decided he needed to supplement existing militia companies with a regiment of militarized Rangers modeled on the Texas Rangers. But with the end of hostilities the Arizona Rangers were no more, until the 1900s. 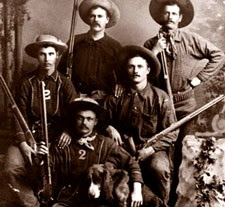 Some real Arizona Rangers from the early 1900s

That didn’t stop Western movies taking them up. The idea was too Western-friendly for mere historical fact to get in the way. Tex Ritter was a bold Arizona Ranger in Riders of the Rockies in 1937, Tim Holt and his dad Jack set up a company of Rangers in 1948 in The Arizona Ranger, and Buster Crabbe and Audie Murphy did it in 1965 in Arizona Rangers. Tristram Coffin also led them on TV in 26 Men but that was set in the early 1900s, so that’s OK.

In this Western the unnamed governor states that he set up the force in April 1882, so it must be Governor Frederick Augustus Tritle (1833 to 1906). I tell you this on a strictly need-to-know basis. He is played by William Forrest, Major Swanson on Rin Tin Tin.

Anyway, this Arizona Rangers tale, The Toughest Gun in Tombstone, was directed by Earl Bellamy (pictured right receiving his well-merited Golden Boot award) and written by Orville H Hampton. My Lord Bellamy (though I don’t think he was that kind of earl) was a TV man really. In fact he had the honor of directing more than 1,600 TV episodes, including examples of pretty well every Western TV show you care to name, but he also did the occasional feature Western, starting as 2nd Unit Director on Arizona in 1940 (so he was coming back in this one), and Seminole Uprising in ’55 was his first in the chair. He helmed Black Jack Ketchum, Desperado in 1956. Later, after Toughest Gun, he would helm the 1966 Audie oater Gunpoint, among others.
.
.
Writer Hampton was also coming back to AZ: he had written Train to Tombstone with Don ‘Red’ Barry in the early 50s, as well as the epic I Shot Billy the Kid, also with Barry. He too did a lot of TV work. In 1958 he would write Toughest Gun and Badman’s Country.

We open outside Phoenix with a man with a rifle cruelly hunting a small boy. This part is quite well done. We do not see the face of the man. The boy (Scotty Morrow) falls unconscious in the road and is taken on board the stage, and carried to Tombstone, where kind Della Cooper (Beverly Tyler, who had been one of the two the leading ladies in The Battle at Apache Pass) takes the frightened child under her wing. He was witness to the murder of his ma, you see, and can i/d the killer.

Feared outlaw Matt Sloane is around and sure enough, we see an unshaven and very tough-looking fellow ride into Tombstone. It’s George. He can’t be the bad guy, surely? Never fear, he’s under cover, a Ranger determined to bust the criminal gang that has the town in its evil grasp. 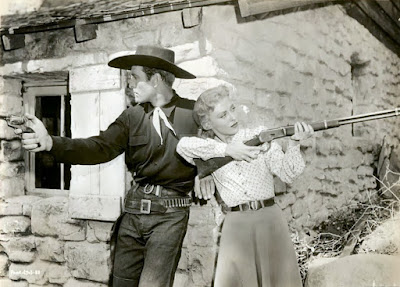 Outlaw Sloane is really a Ranger tracking the gang. Actually, this scene didn’t appear in the movie. Maybe it ended on the cutting-room floor.

Hank Worden is the liveryman Matt gives his horse to, so that’s good.

Matt soon meets Ringo – who cracks him over the head with a pistol butt. This Ringo is the crooked town boss (“You’re in Johnny Ringo country,” he announces) and he’s played by our old pal Jim Davis. His henchmen are Ike Clanton (Gerald Milton, small parts in five Western features and a lot of TV work) and Curly Bill (Lane Bradford, low-budget Western regular). Actually, this is very like a serial or second-feature gangster flick, with these crooks running the town as in the 1920s, just in Western garb. The noirish vibe is enhanced by an almost Untouchables-style voiceover commentary. 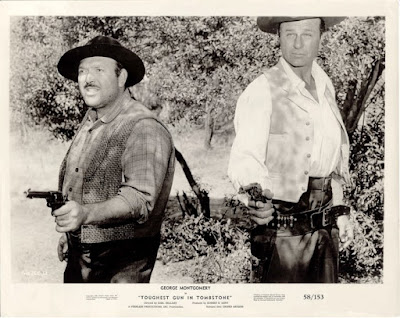 Now Matt changes into a slick black costume, and his habitual huge-brimmed hat has a rather snazzy Indian hatband. He meets up in secret with his fellow Rangers and the governor, and they plan how to bring the crooked consortium down. Harry Lauter is Matt’s loyal Ranger sidekick, so that’s good too. 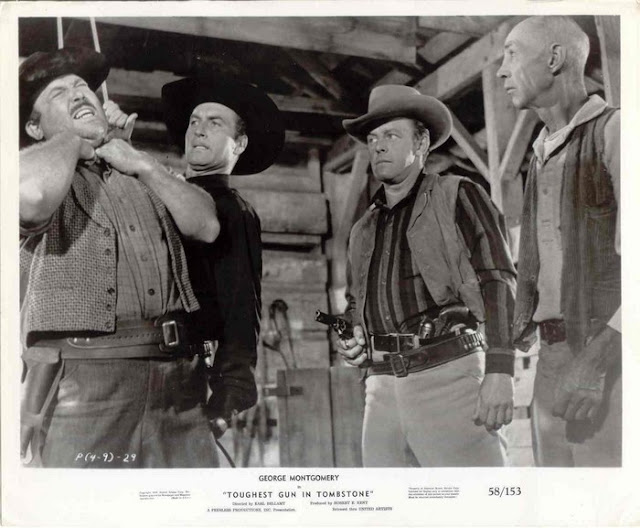 This is a good bit. Hero Matt gets info from Curly Bill while sidekick Harry Lauter and stableman Hank Worden look on.

It turns out that the scared kid in the first reel is Matt’s son Terry. Matt can’t let him in on his true identity so the boy thinks his dad is an outlaw. Matt wants the lad in security and has him moved, by stage again, but it’s a mistake because that man who was stalking him gets him this time, and shoots him down, the skunk. The doc (Harry Strang) is very cross at this. “We’re going backwards,” he says angrily. 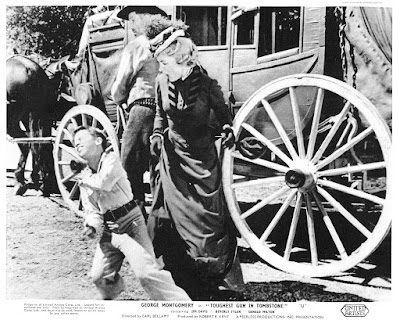 Shooting children. How low can you get?

Well, I won’t tell you all the ins and outs of the plot. It would take too long and anyway it would spoil the fun. But there’s a great deal of skullduggery, I can assure you, not least from Della’s dad (Don Beddoes), involving cheap Mexican silver and defrauding the US government. Romance also blooms. The recovering boy takes a shine to Della, you see, and so does his dad. We sense a new family unit is forming. They’ll probably all three all go off to California in a buckboard together at the end. They usually do.

Who killed the boy’s mom and hunted the little witness, and who is the secret Mr Big behind Johnny Ringo? Ah, that would be telling. There’s a dramatic final shoot-out and evil Ringo takes the boy and makes a run for the border, with the goodies, notably Matt, giving chase. You may guess the outcome. 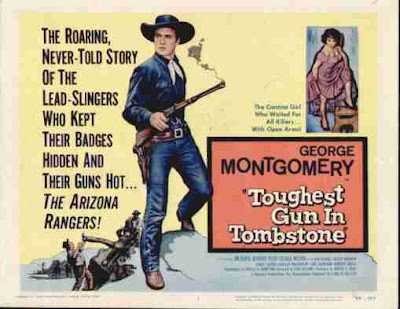 There’s a reason why it’s a “never-told story”. Because it never happened. But who cares?.
PrevPreviousReview of the year 2018
NextBrian GarfieldNext