Peppard saves the day but without the A-Team

The Bravos was an early-70s made-for-TV cavalry Western which starred George Peppard and Pernell Roberts.

Peppard, often cast in undemanding action roles, only did five Westerns, perhaps surprisingly (you would have thought the genre ideal for his style). His first was MGM’s elephantine How the West was Won in 1962; then he was quite good in Rough Night in Jericho (with Dean Martin) in ’67; Mirisch’s paella Cannon for Cordoba came next; the very mediocre AV McLaglen-directed One More Train to Rob followed in 1971; and finally The Bravos, his last foray in the genre, and his only Western for TV. It wasn’t actually a very glittering Western career. Still, he had a tough-guy air about him and didn’t do badly as the cavalry commander posted to New Mexico Territory to fight the Navajo. 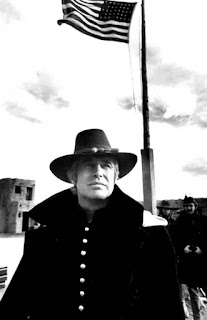 Roberts was of course in his element on the small screen, having been Adam Cartwright on Bonanza until 1965, when he could stand it no more, then later Trapper John, MD. He did do the occasional Western feature, being especially good as the bad guy in Ride Lonesome with Randolph Scott and also quite memorable as an evil gunman in The Sheepman with Glenn Ford (he did bad guys quite well) but really he was a TV Western actor. Unfortunately, his part in The Bravos is very one-dimensional and didn’t give him much scope. 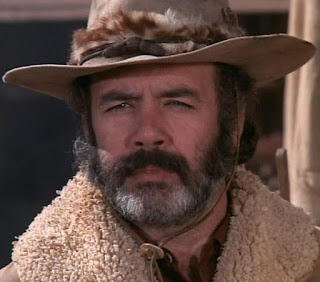 Major Harkness (Peppard) is beleaguered in his fort, short of supplies and men. His boss back at Fort Stanton will only send bureaucratic papers, not anything useful like reinforcements or ammunition. The Navajo are dangerous foes. Meanwhile, a wagon train of settlers out of Independence is being led by dictatorial but incompetent ‘Captain’ Buckley (Roberts), who kills three young Indian boys in a trap and thenceforth thinks it’s easy and the Army isn’t doing its job.

One of the settlers, Raeder (Bo Svenson, latterly in Inglourious Basterds and Kill Bill but Westernwise mostly confined to TV, including being Colonel Jeb Quintano in Lonesome Dove, the series) understands how foolish Buckley is and bravely sets out alone to Harkness’s fort to get help, succeeding but only just. Major Harkness rides out and rescues the settlers, bringing them to the (relative) to the safety of the fort. 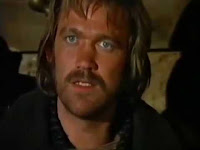 Harkness is the classic ‘man who knows Indians’, beloved of Westerns, and he sees that it was Kiowa that were attacking the wagon train, not Navajo. The Kiowa are even more fearsome, we are told. Their chief is Satanta (Joaquín Martinez) and he wants revenge on Buckley for murdering those three young braves.

Now, Satanta appeared a fair bit in Western movies. Jay Silverheels played him in War Arrow,  and Stuart Randall did the job in They Rode West. Larry McMurtry’s Blue Duck was in some ways based on Satanta. Actually, in real life, Buffalo Bill was once captured by Satanta. Bill managed to persuade the chief that he was on a mission to get cattle to be issued to the Kiowas, and this worked for a time, until the Indians saw no cattle but instead saw Bill high-tailing it for Fort Larned. They pursued him and were gaining but he came up with a party from the fort who drove the Kiowas off, killing two. 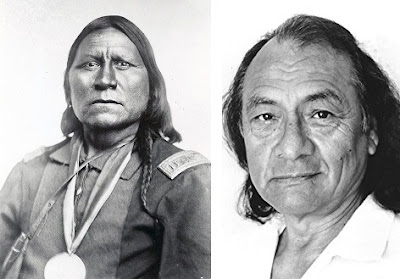 Not a bad likeness, actually

And talking of the real Satanta, or Set’tainte, also known as White Bear (c. 1820 to 1878), he was born the son of Chief Red Tipi and a Mexican captive. He developed a reputation as an outstanding warrior and in his twenties was made a sub-chief of his tribe, under Dohäsan, with whom he fought at the first battle of Adobe Walls in 1864. He signed a series of treaties, notably the Medicine Lodge Treaty of 1867, but neither side respected the provisions. In 1871 Satanta led several attacks on wagon trains in Texas. He was arrested by General Sherman and, with fellow chief Satank, put on trial for murder, the first chiefs to be so tried. He was found guilty and sentenced to death, commuted to life in Huntsville State Penitentiary. He was released on parole after two years. Satanta was present at the fight with buffalo hunters at 2nd Adobe Walls in 1874 (where young Bat Mastersonmade his name), which violated his parole, and he was returned to Huntsville. There he committed suicide in 1878 by throwing himself from an upper window (it was said by some, trying to fly, like Blue Duck). In The Bravos, though, he is just another generic Indian chief to be defeated by the brave boys in blue.

The fort, by the way, is a nice adobe one (perhaps a nod to Adobe Walls), not the usual wooden toy fort Hollywood liked. I’m not quite sure where it was, though most of the locations (very nice they are too) are around Sedona, AZ, with those classic red-orange rocks. The DP was Enzo Martinelli, who worked on over a hundred Westerns, big-screen and small, from 1946 to 1974, so respect, dude.

There’s a young couple of settlers (Belinda Montgomery and Barry Brown) who provide a modicum of love interest, I suppose, but both are rather silly and could have been dispensed with.

Now the young son of the major arrives, Peter (Vincent Van Patten). He has been expelled from his Eastern school, where he was sent when his mother died and his dad couldn’t look after him on the wild frontier. The young man is angry and rebellious. Former tennis pro Van Patten (he once beat John McEnroe) was the bionic boy on The Six Million Dollar Man. I tell you this on a need-to-know basis. He was in a few Western TV shows, and he was the kid who befriends Charles Bronson in the lousy Chino, his only big-screen oater.

The lad manages to get snatched and abducted during an attack on the fort by the Kiowa, and so a rescue mission has to be mounted. Three intrepid characters set out to recover the youth from the mountain fastness of Satanta. They are his dad, of course, the brave and resourceful major; Raeder the Swede (he has done a deal: save the boy and we will forget the wanted poster and $600 reward); and highly-skilled Army scout Ben Lawler, played, oh good, by LQ Jones. LQ was a hardened Western vet, of course, by this time, having started off in our noble genre as far back as some episodes of Cheyenne in 1955, and he had been fabulous in The Wild Bunch for Sam Peckinpah in 1969 with Strother Martin. Anyway, you may imagine with what daring and courage the trio now act. The Kiowa don’t stand a chance.

The director was Ted Post, mostly a TV director, especially Gunsmoke and Rawhide, but he did the occasional feature Western too, such as Hang ’em High. The movie was written by Christopher Knopf, who also specialized in TV Westerns, especially Zane Grey Theatre and Cimarron Strip but who also worked on Posse (the Kirk Douglas one), and Joel McCrea’s The Tall Stranger. 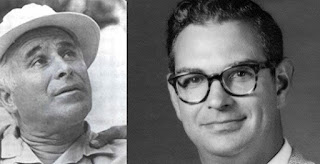 A .50-70 Government plays an important part. 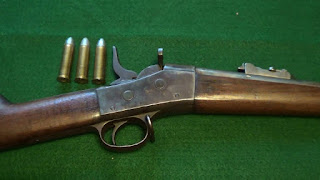 It saves the day

It’s not a bad movie, actually. I have definitely seen worse.

Webster’s defines bravo as villain, desperado or hired assassin, so I’m not quite sure who the bravos of the film’s title were. Never mind.