When minor movie studio Lippert had a (for them) big hit in 1949 with I Shot Jesse James, starring John Ireland as Bob Ford, they of course wanted to milk it for all they were worth, and the year after they came out with I Shot Billy the Kid, with Don ‘Red’ Barry and Robert Lowery, released in July, and the same team made another post-Jesse story, Gunfire, also known as Frank James Rides Again, in August, then they brought Ireland back for the sequel The Return of Jesse James in September. They couldn’t use the title The Return of Frank James because Fox had snaffled that in 1940 for their sequel to their Technicolor Jesse James in 1939.
.
.
If you get me.

None of these Lippert sequels was a patch on the original I Shot Jesse James, which had been written and directed by Samuel Fuller and was, though pulp fiction, then clutched to the bosom of East- and West-Coast intelligentsias and French cinéphiles. The Lippert follow-ups were just cheap exploitative rip-offs designed to make a buck or two in low-rent Mid-West theaters. But they weren’t Z-movies. They all had something, some limited something, about them. They are no great Westerns, far from it, but they are just about watchable.

The idea behind Gunfire is that after the assassination of Jesse, a certain outlaw, Bat Fenton (Barry) is a “dead ringer” for Frank James (Barry), and decides to use that happenstance to pretend to be Frank, robbing banks, stages and trains and striking terror into the hearts of the citizens of Colorado (the story centers around Creede). The James gang rides again. This was of course exactly the plot of The Return of Jesse James.

Barry was a bit of a sad case, really. Born Donald Barry de Acosta, or possibly Milton Poimboeuf, in 1912, he reached his peak of Western stardom, such as it was, in the early 1940s. 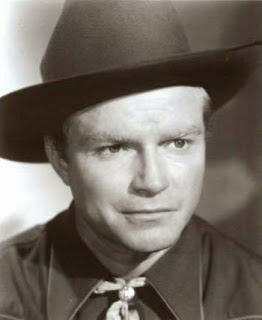 His first Western appearances were in two of Republic’s Roy Rogers/Gabby Hayes oaters of 1939, when he was 27. In between these two he was fourth-billed, after John Wayne, Ray Corrigan and Raymond Hatton, in a Republic Three Mesquiteers film, as the eponymous Wyoming Outlaw.

But his real breakthrough came in 1940 when he starred as Red Ryder. Though Red Ryder was tall in the comic strip and Barry was only five foot four (1.64m), luckily he had a boy sidekick who was even shorter. 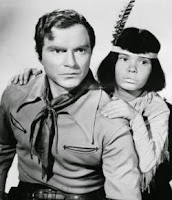 You’d have to be quite elderly now (even older than I am) to have grown up with Red Ryder. The comic strip created by Stephen Slesinger and artist Fred Harman began in November 1938 and moved to radio in 1942. Despite two pilots, it never made the vital leap to television and was therefore doomed to perdition. However, as a juvenile twelve-chapter Republic movie serial The Adventures of Red Ryder it was enormously successful. There followed no fewer than 27 Red Ryder feature films between 1944 and 50, but not with Barry. Wild Bill Elliott, then Allan ‘Rocky’ Lane and finally Jim Bannon played Red. The 1940 hit had been enough, however, to give Donald Barry his nickname, and he was forever after Don ‘Red’ Barry – to his eternal regret.

It was downhill from there on, though. He launched his own production company (Gunfire is announced as A Donald Barry Production) but erratic and difficult behavior made film roles increasingly rare. In 1954 he took the lead in a shockingly bad picture released by United Artists, Jesse James’ Women, which he co-produced, co-wrote and directed. He was second-billed to the ‘comic’ Judy Canova at Republic again in Untamed Heiress. He got smaller and smaller parts. Ego, bad temper and alcohol-fueled domestic disputes combined with lack of work and pushed him into depression, and in 1980 Don ‘Red’ Barry committed suicide. It was a tragic story, really.

As for Robert Lowery, he was Batman in 1949 but he did quite a lot of Westerns, starting with small parts in A-movies, in John Ford’s Drums along the Mohawk and in the Tyrone Power The Mark of Zorro, but after that it was pretty well low-budget Westerns all the way. He co-starred with Don Barry in The Dalton Gang in ’49, then Border Rangers and these two pictures, I Shot Billy the Kid (in which he played Pat Garrett) and Gunfire, in 1950. 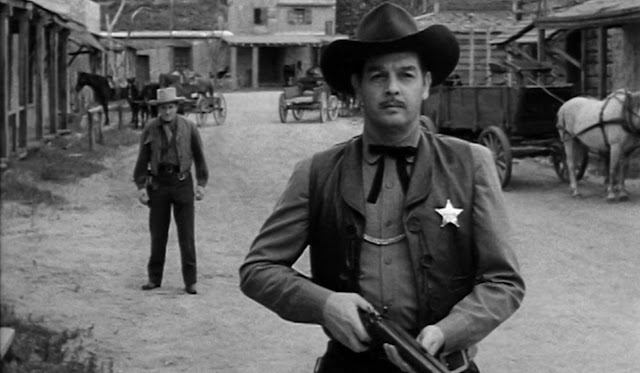 Lowery is the lawman who gets Bob Ford

In The Return he is ‘John Kelly’, the fellow who shot Bob Ford in Creede. We see the Main Street showdown in which Ford (Roger Anderson) draws on Kelly but Kelly gets him with a shotgun. Much of the plot and even some of the characters (with different actors) were taken from I Shot Jesse James, so Lowery is the law in Creede (the real assassin of Ford, Kelley, or O’Kelley, wasn’t, of course) and we also get the fictional character Cynthy, whose favors both Bob Ford and John Kelly solicit. In I Shot Jesse James Cynthy was played by Barbara Britton; this time Pamela Blake does the honors.

The epic was produced, written and directed by William Berke (so there aren’t many others to blame). Berke (who also did Border Rangers), director Richard Fleischer recalled, “was known as King of the B’s. For years and years he had made nothing but pictures with ten or twelve day shooting schedules, minuscule budgets of about $100,000 and no stars. Without bothering with editing or any postproduction chores and with short shooting schedules, he was able to squeeze in eight or ten pictures a year. And he was going nuts”. 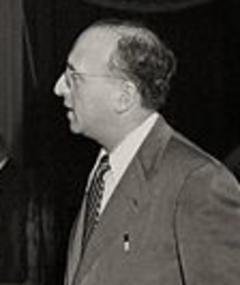 We open with an outlaw Matt Riley (Steve Conte) visiting Frank James (Barry). Frank is very respectable and the movie perpetuates the myth that Frank James got religion. Barry’s Frank is reading scripture. “Holy Bible, huh?” says Riley. And Frank quotes it to all and sundry, using the “vengeance is mine” bit to justify his not going after the Fords with a gun. He has an apple-pie wife and two perfect kids, to enhance the ‘perfect family man’ image. Actually, his wife, Emily (in fact it was Annie) is played by Barbara Woodell. Now Ms Woodell was a serial Mrs James because she played Jesse’s wife in both I Shot Jesse James and The Great Jesse James Raid in ’53. Frank’s young son lies to Sheriff Kelly to give his dad an (unnecessary) alibi and Frank takes off his belt in order to beat the child, to teach him not to lie. This is meant to indicate Frank’s decency and probity to the audience. I don’t think it would these days.

There has to be some comic relief so we get a vaudeville turn from Wally Vernon as Clem, a drunk in the saloon whom Sheriff Kelly takes on as a deputy to reform him (he sobers up and shapes up). Vernon was a New Yorker with quick-fire Runyonesque diction and a fish out of water here but he did a dozen oaters with Barry. 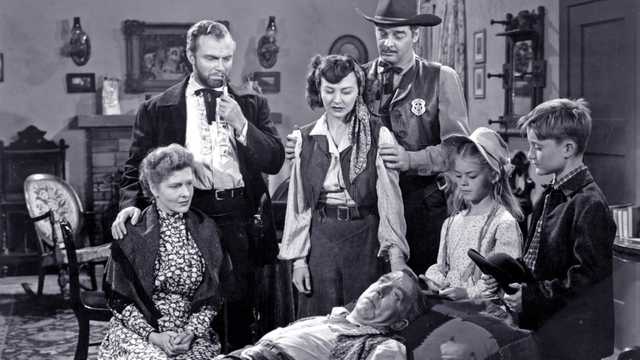 Frank does go after Charlie Ford, though, despite the strictures of scripture and the pleading of his spouse. He has a consumptive cough as he rides along. Meanwhile, the faux Frank James, outlaw Fenton (Barry, also), is robbin’ banks and stages and trains with gusto, showing his face and having his accomplices call him ‘Frank’ so that everyone now thinks Frank James is back on the owl hoot trail.

There’s a crooked saloon owner (obviously), Simons (Leonard Penn) who has a saloon gal named Flo (probably short for Floozy) played by Jan Sterling. He gives the gang the lowdown info. It will not end well for him.

Despite the minimal budget there are a few exterior location shots (Iverson Ranch, it looked like) but of course the majority is done with cheap interiors, with the characters explaining the plot to each other. The quality of the image on the DVD isn’t bad, though. It’s black & white, of course, and comes in at only 59 minutes, so it was almost certainly designed as a second feature. 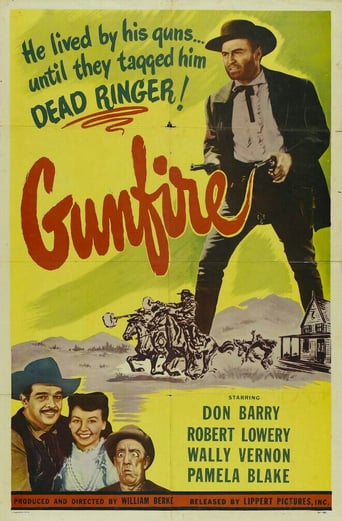 It’s no worse than many a low-budget Western, I suppose, though not much better either. Still, you could watch it, especially if you are a Frank & Jesse fan.

PrevPreviousThe Westerns of Audie Murphy
NextTake Me to Town (Universal, 1953)Next

PrevPreviousThe Westerns of Audie Murphy
NextTake Me to Town (Universal, 1953)Next
Jeff Arnold © 2022 – All rights reserved – Designed by BetterCallChris
Scroll Up