Not quite so light-hearted

The third Western that Republic had Roy Rogers star in, after Under Western Stars and Billy the Kid Returns, was, despite the rather cheery title, slightly less light-hearted than the preceding two.
.
. 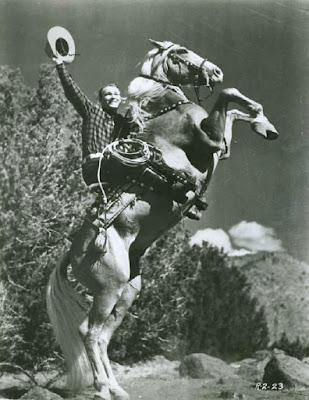 Hi yo, Trigger!
(It’s a publicity still; he doesn’t do this in the movie)

OK, yes, the mixture was much as before, a one-hour black & white oater with songs, a sidekick (this time, our old pal Raymond Hatton, more leathery and cantankerous than comic) and a resourceful Trigger. And a gal to be chastely romanced, of course. But there were fewer jokes, and they tried for a more serious, even somber approach.

It’s a Texas Rangers tale, beloved of Hollywood. It seems to be notionally set in 1870 because in the story the (unnamed) Governor (Burr Caruth) dissolves the Rangers, and Captain Roy Rogers (Roy Rogers) finds himself out of a job and having to let his men go. An unscrupulous politician, Senator Harvey (Purnell Pratt) tries to set up an alternative force, headed up by his chief henchman (Harry Woods), but it’s just a protection racket with gun-thugs. Eventually the Rangers are vindicated and Capt. Roy gets his job back. Historically, in 1870, during Reconstruction, the Rangers were replaced by a Union-controlled version called the Texas State Police, disbanded only three years later. The state election of 1873 saw newly elected Governor Richard Coke and the state legislature recommission the Rangers. But of course historical accuracy was not these Westerns’ forte and indeed, that was not the point of them. 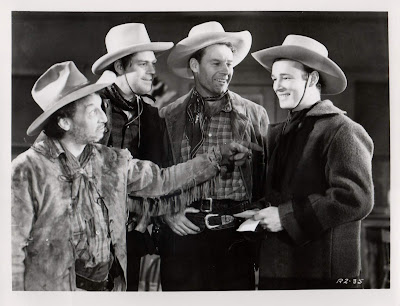 Captain Roy’s men include his brother Len, played by former star of the screen now reduced to bit parts Lane Chandler, but Len is soon slaughtered on his ranch by the thugs and thus written out in the first reel. Luckily though, Roy, now a sergeant in the US Cavalry (he enlisted after he lost his Rangers job because he was enamored of the colonel’s daughter) is on hand to rescue Trigger from Len’s burning barn. Phew.

The glam daughter, Janice, is played again by Lynne Roberts, billed as Mary Hart, so that Republic could have posters that appeared to be headed ROGERS AND HART. Her dad, the crusty old colonel, is Western vet J Farrell MacDonald. In the ‘rest of the cast’ list figure both George Montgomery, as Ranger in black hat, uncredited, and Robert J Wilke as Henchman, uncredited, but I didn’t spot either. A pity because it was the great Bob Wilke’s very first Western. I’ve always been a serious Wilke fan. Montgomery was already a hardened trail hand, having had ride-on bit parts in half a dozen Westerns, including the previous Roy Rogers outing, Billy the Kid Returns. He would not lead in a Western until 1941 so sagebrush fame was some way away yet. 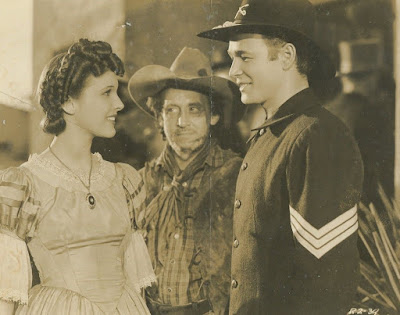 Joe Kane directed once more, with Jack Marta at the camera, reliable hands both.

There are four songs, quite a limited number for these pictures, and only one is a light-hearted jokey one, I Learned a Lot About Women, while the others go for a plaintive home-on-the-range timbre. These include the Civil War ballad Tenting Tonight. Backing is provided by all the Rangers; there’s no named singing group to accompany Roy.

Roy’s rig is rather fancier than previously and he is now decked out in two-gun holster with pearl-handled pieces, checked Western shirt, and pants tucked into tooled boots. Except when he’s wearing his sergeant’s uniform, of course. 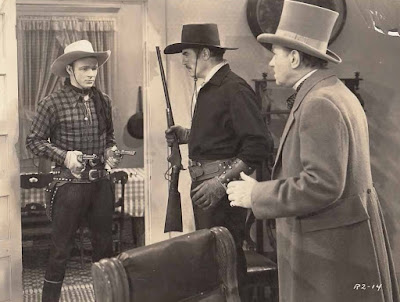 Roy gets the drop on the bad guys

There’s a bank robbery, some smoke signals, several chases, a court martial (naturally Roy is exonerated) and a kiss at the end, though as a map of Texas is drawn down over the scene, like a blind, we are not allowed to witness this; Ray describes it for us.