The first of the three Westerns that highly experienced Lesley Selander directed for producer Hal Klein at Fox in 1965 was Convict Stage. It’s actually quite good. Selander always handled action well and this is no exception. He also managed to get a somber mood going this time, and some dark themes.

Unusually, for he normally took only character parts, often as the heavy, Harry Lauter starred. I’m a bit of a Harry fan, having admired his craggy looks in dozens and dozens of oaters from the late 1940s right through into the 1970s. He appeared in 52 Western feature films and no fewer than 253 episodes of Western TV shows, so he was a very familiar face to fans of the genre. In this one he is Ben Lattimore, a gunfighter who wants to kill the two young men, Jeb and Johnny Sims, who murdered his sister and have just shot another woman in the back during a stage robbery, which we see in the opening scene. 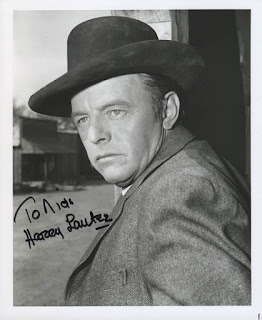 Harry an old faithful of our noble genre

But there’s an old lawman, Marshal Jethro Karnin, who will have none of it. He is going to do his duty and take the accused men from Apache Wells to Prescott (it’s an Arizona tale) for trial. The law must take its course, however guilty the youths may or may not be. So actually the title’s wrong because they aren’t yet convicts, but let’s not split judicial hairs. Karnin, who in the dialogue claims still to have a decade to go before his allotted three score years and ten, is played by Don ‘Red’ Barry (then 53). Poor Don wasn’t quite on the skids yet (he would be reduced to bit parts and would eventually succumb to a self-administered gunshot wound) but his career was hardly in the apogee. In fact, though, he doesn’t do badly as the no-longer-young peace officer. 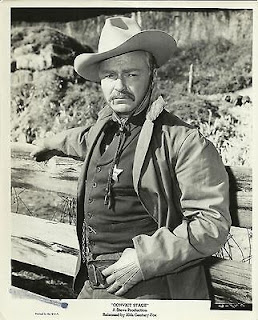 Don didn’t do badly in this one

Barry actually wrote the story for this one. It was worked up into a screenplay by Daniel Mainwaring, who wrote twelve big-screen oaters so he was quite handy with a Western script. 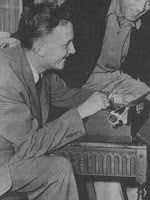 The quality of the modern print is very good and the nice Kanab, Utah locations are well photographed in a sharp black & white, by Gordon Avil, not a Western cinematographer I was too familiar with but he went right back to shooting the 1930 Billy the Kid, the Johnny Mack Brown one directed by King Vidor, and would later work the camera on the likes of War Paint, The Yellow Tomahawk and Fort Yuma (all Selander pictures) among others. He and Selander had a good eye for landscape and framing. Here’s a bit of Western trivia for you: Selander started work as assistant director under Lynn Reynolds on a silent Western in the 1920s and Reynolds was the first to use the Kanab locations for shooting. So Lesley was returning. 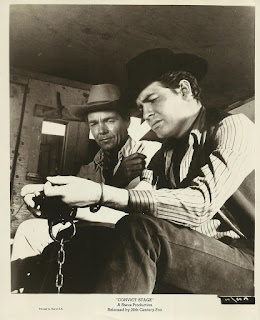 The (not quite yet) convicts

There was a kind of stock company for this trio of pictures, the actors taking turns with bigger or smaller parts as the occasion demanded. Hungarian actress Hanna Landy, not very good, I fear, in Fort Courageous, was actually strong in this one as the sinister and murderous mother of the two young killers (Joe Patridge and Eric Matthews). She comes over all maternal and sweet to the marshal, pretending to be a lady going to assist her daughter in childbirth, in order to get on the stage taking her boys to prison, but she has secreted two six-shooters in her voluminous underwear, which she will slip them (the guns, not the bloomers) at an opportune moment so that the hooligans may make their escape. She also has an accomplice, her lover (she has driven her hubby, the boys’ daddy, away by her nastiness) and this man, whom the poor young saps call Uncle Adam (George Sawaya), is leading a posse of ne’er-do-wells who plan to aid and abet the break-out by shooting the goodies on the stage.

Hanna good as the evil mamma

There are quite a few people on board the vehicle, one way and another. The driver is Dix, played by our old pal, stuntman and character actor in many a Western Fred Krone, and he is assisted by a Paiute, named Paiute, played by another vet of the genre, Michael Carr. On top of the stage with them are the evil Mrs Sims and also the wife of gunfighter Ben, Sally (third-billed Jodi Mitchell, in her only movie). Sally does not approve one bit of Ben’s vengeance quest. Thou shalt not kill, she admonishes him. And when he won’t listen, she leaves him, taking the stage. Little does she know that her husband will catch up with the party, there will be gunplay, and she herself will be obliged to pull a trigger. Ah me, cruel fate. 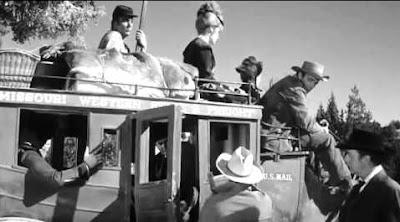 So no wonder the horses get tired (it’s a four-up) and they have to rest up at Calico, a classic ghost town beloved of Western movies. Here the climax will play itself out.

Walter Reed is another of the stock company (as he was of John Ford’s). The drunk doc in Fort Courageous, he is a drummer on the stage in this one, who gives his profession when the marshal asks as “Drunk.” He has a handy pistol and will be one of the defenders when the bad guys attack. Well, the marshal, gunfighter, driver, Indian and drummer combined will provide effective opposition to the riders (they can all use a gun pretty well) but the fly in the ointment will be the mother, for she surely isn’t on the side of the good guys, and she will be a deadly fifth-columnist in the ranks of the defenders. 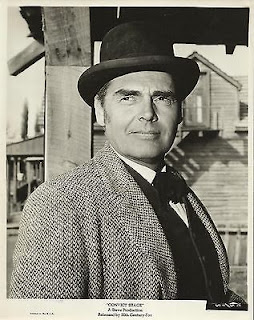 Reed’s part a bit smaller in this one

Still, we guess that although there will be casualties, the good guys will basically win out, probably the gunfighter and his estranged wife will be reunited and the evildoers bested. And we won’t be far wrong (hope this isn’t a spoiler). There’s one of those classic quick-draw showdowns in the last reel, between gunfighter Harry and one of the killer youths. You know, where they wait for each other to draw first, following the Western code of fair play. Who will win? Ah, you’ll have to watch it and see. 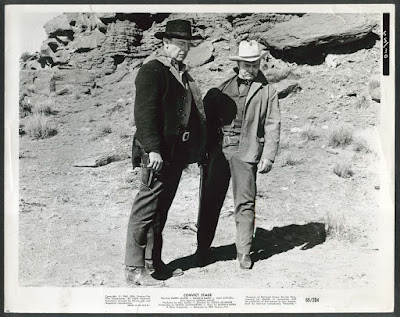 Gunfighter and lawman come to a grudging mutual respect

It’s not bad, actually. Probably the best of the three.