.
.
Just because they make far fewer Westerns now than they did in the olden days doesn’t mean that the ones they do make are all good. Some recent ones have been well made but the bad Western is not the preserve of the past. As proof of that, watch Blood Country, a 2017 effort now available on Amazon Prime. Or rather, don’t. If you do, I fear you will be disappointed, or at least bored and puzzled. 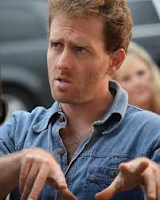 When a movie is directed, written and produced by a person, and stars that bod as well, there are really few others to blame. Travis Mills, pictured left, who also co-founded Running Wild Films, the production company, has 67 credits as producer, director or writer, and we are told that he is producing (and perhaps writing and directing, even starring in) twelve Western feature films to be produced in 2020. My heart does sink somewhat if they are like this one.
.

Actually, I might blame someone else apart from Mr Travis. It’s Brooklyn Wilde. Who is Brooklyn Wilde? Well, Ms Wilde was in charge of costumes on this picture, and right from the first frames it’s one of those movies where a lot of actors stand around in what are very obviously costumes. I don’t know if it’s the fault of the wardrobe department, who design badly, or the actors, who can’t wear old (or old-style) clothes convincingly, but whatever it is, it ruins so many films. Westerns depend on credibility of their past setting, or good ones do anyway, and when you quite obviously have modern people wearing odd clothes, the whole show doesn’t work from the get-go. The characters all look as if they are some fancy-dress pageant or historical re-enactment.

Another problem is the sound. It’s muddy and unclear, and when combined with the lousy diction of many of the actors, you simply don’t know what they are saying. And in a ‘talky’ Western which depends on people explaining the plot to each other (at least between the interminable ‘meaningful’ silences) this is the kiss of death. I wanted subtitles but I couldn’t get them up on the screen for some technical reason.

There are some good points. It’s nicely photographed, by Nicholas Fornwalt. I’m not sure where (the locations aren’t listed on IMDb) but it’s supposed to be Mississippi in the 1880s. And I thought the central character of the old sheriff, Dan Lee (Cotton Yancey, a Mississippi native, who was an uncredited horse wrangler on The Magnificent Seven in 2016) was reasonably convincing. He did manage to wear his clothes properly (perhaps they were his everyday duds) and his mustache was pretty good. 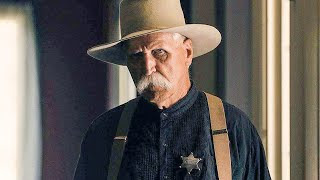 But that’s pretty well where it ends.

At an hour and a half, it drags, and the pace is molasses-slow. I had to sit through it twice because it’s one of those pictures where the viewer keeps saying, ‘Who are all these people?’ I did get it more on the second time through but that made it even slower. My old Pa would have absolutely hated it. He loved Westerns but he couldn’t even take flashbacks. The stories had to be entirely linear, with an action opening, some plot development which established the characters (there had to be good guys and bad guys, obviously) and a final action showdown in the last reel. He would have switched this one off after ten minutes. The action opening is a man stealing a cabbage.

Now perhaps cabbage-rustlin’ was all the rage in 1880s Mississippi, I don’t know, and when a man cut another fellow’s cabbage, that was a shootin’ matter. But I doubt it. Still, this is supposed to be a true story (though of course when we are told on the screen that the story is true it never is) and generation-long blood feuds have started over equally stupid matters, so maybe it was true, but it hardly makes for an exciting start.

The music is bad, verging sometimes on the maddening, and too loud, so you turn the volume down and then you can’t hear what people are saying. Not that you can make out their words anyway, whatever volume setting you choose.

At one point the old sheriff is shot off his horse then has his throat cut. So that’s him a goner then. You would think. But we see him in the next scene alive and well. It was all a dream, apparently.

Two Negroes who are key to the plot are also shot but later will be alive enough to travel West in a wagon.

A man is shot in the crotch in a bushwhacking, though who he was or why he was shot remains a mystery to me.

There’s fratricide and a snake. Vaguely biblical references, I guess.

The sheriff dunks himself in a swamp and the screen fades to black. Oh good, you think, it’s the end. But nay. We get an epilogue set ten years later and the cabbage-rustler (Chris Bosarge) seems to ask a Negro Charon to ferry him across the River Styx. I think. Or maybe it was the Pearl River.

Pretty bad, all in all, and probably best avoided unless you have masochistic tendencies.