The great film reviewer Roger Ebert wrote in 1968, “A lot of people expect a masterpiece every time they go to the movies, and the other day someone was complaining that Madigan wasn’t a work of art. So what did he expect? It was a very good cop movie, and Widmark and Fonda were fine. How many movies give you that much?”

He had a point. The number of really good pictures released in ’68 could be counted on the fingers of one hand. Ebert lists five. If you’re interested (for I know Westernistas do sometimes watch pictures in other genres) they were The Battle of Algiers, then Falstaff – Chimes at Midnight, and The Graduate, as well as 2001: A Space Odyssey and The Producers. If Mr Ebert had been writing about our beloved genre, though, he would have had a harder time finding five that year. Once Upon a Time in the West? Hang ’em High? Firecreek? Hardly.

But, if you just liked going to the movies and weren’t expecting works of art, you did have a goodly number to choose from. I liked The Stalking Moon, for example, with Gregory Peck. Shalako was better than many gave it credit for. Even Arizona Bushwhackers wasn’t that bad – good old Lesley Selander.

And in the not bad (but not all that terribly good either) column, we find The Scalphunters.

Burt Lancaster was another of those Western actors whose CV is a bit, er, mixed. He could be superb, and in two pictures particularly he was, for me, outstanding. I am thinking of Gunfight at the OK Corral in 1957, for John Sturges,  when he was a splendid Wyatt Earp, and The Unforgiven for John Huston in 1960, in which he was magnificent as paterfamilias homesteader Ben Zachary. Later in life he also did two very fine movies, as Bob Valdez in the Elmore Leonard story Valdez is Coming and as the Al Sieber-ish scout McIntosh in Ulzana’s Raid. On the basis of those four Westerns alone Burt deserves a place on the Western Mount Olympus (somewhere up in the Rockies).

But then he was also in some dreadful clunkers. Difficult to find anything good to say about The Hallelujah Trail, even if it was Sturges again, and Burt spent most of it overacting and mugging with that alligator grin, which he overused also in Vera Cruz and The Professionals. He just loved playing the cheery rogue, and it did get a bit tiresome. In the end he did have the grace to admit that he’d been completely out-acted by the ultra-low-key performance of Gary Cooper on Vera Cruz. He ended his Western career in that semi-comic vein, as Bill Doolin in Cattle Annie and Little Britches – in which he was, yup, a cheery rogue. 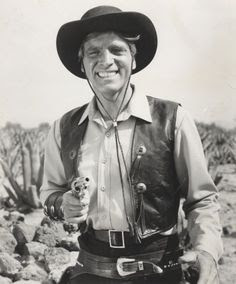 Like a smug alligator on his way home from the orthodontist

And then there were the Westerns in between. He was very solid in his first Western, Vengeance Valley, from the Luke Short novel, and OK, I guess, if improbable, as Broncho Apache in Apache (he worked three times for Aldrich). Lawman was a lousy film, badly directed and written, but he did his best in it and convinced as the tough sheriff on a mission.

The Scalphunters is perfectly acceptable if you want a night out at the movies, or, these days, if you want to bring it up on your widescreen TV on Netflix (or was it Amazon Prime? I forget). Don’t expect greatness. It’s a comedy Western, and those are very hard to get right. They can fall flat on their face. But this one might bring a wry grin to your face. Or, who knows, maybe even a slight chuckle in your throat. Burt was certainly on sparkling form. 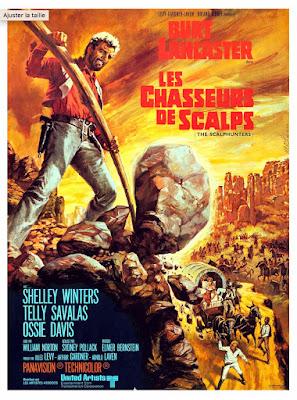 Quite fun, if you’e not too demanding

He plays Joe Bass, a coarse and salty fur trapper, who meets up with a band of Kiowa led by Two Crows (Armando Silvestre) and they force a trade on him, though he is most unwilling: they will give him a Negro slave they captured from the Comanches and will take the mule loaded with furs that it took Joe all winter to amass. He grumbles like anything, but has to agree. He doesn’t give up on getting those furs back back, though.

Joe Bass is a rough diamond

The African-American gentleman in question is Joseph Lee, played by fourth-billed Ossie Davis, and his developing relationship with the trapper is at the heart of the movie. Mr Davis is probably known best for later pictures and was not a professional Westernist but he did do another comedy oater the following year, Sam Whiskey with another Burt, Reynolds of that Ilk.

Joseph is the clever one

It was 1968, so they had to tread carefully with the white/black thing, even if it was supposed to be the 1860s. Joseph is intelligent, literate and erudite (he quotes Aesop in Latin), while Joe Bass can’t read or write and wouldn’t know who Aesop was in any language. He’s pretty well a slob. We sense that Joseph will win this encounter. Actually, I think the rapport is done rather well, with gradually building mutual respect between the two men – though with considerable resistance on the part of Joe. 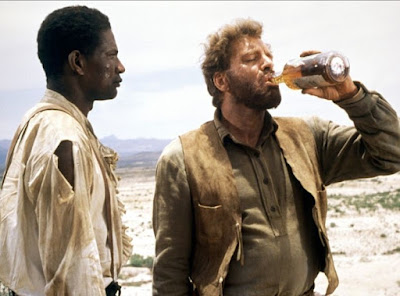 It takes time, but respect builds

Sydney Pollack directed. Not the first name that would spring to mind if you were casting about for someone to make a Western, huh? When you think of pictures he directed, produced or acted in, you first come up with the likes of Tootsie, The Quiet American or Eyes Wide Shut. But he once said that one couldn’t claim to be a “real movie director” without a Western under the belt, and he directed three – or two-and-a-half. The Scalphunters, Jeremiah Johnson in 1972 and The Electric Horseman in 1979, both the latter two with his favorite actor, Robert Redford. Pollack had met and been impressed by Lancaster when on the set of The Leopard in 1953 (Pollack was a dialogue coach) and he later directed Lancaster in Castle Keep and The Swimmer. 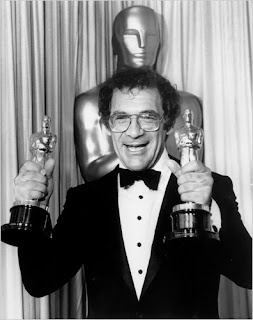 He didn’t get an Oscar for this one, though

A word for writer William W Norton. His Western record is not of the best, I fear. He has the perfectly appalling The Hunting Party to his ‘credit’ and he also co-wrote the extremely imperfect The Man Who Loved Cat Dancing, as well as that other Ossie Davis picture, Sam Whiskey. Not many plaudits here. But he did a good job on The Scalphunters, managing character development rather well. 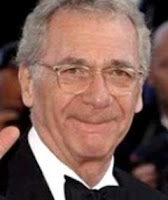 The Scalphunters isn’t just a Lancaster-Davis two-hander. It’s more of a foursome. The other two major characters are Jim Howie, the leader of an odious band of scalps-for-bounty thugs, and his buxom mistress, Kate. These were played by two actors who aren’t really among my all-time favorites in oaters, Telly Savalas and Shelley Winters. Doubtless Mr Savalas was very good as a tough cop or something, I wouldn’t really know, but his Western record was verging on the dismal. Mackenna’s Gold (ugh), Land Raiders, A Town Called Bastard (title sometimes bowdlerized to A Town Called Hell), 2 spaghettis and the perfectly dreadful Pancho Villa. Oh dear.

Who loves ya, baby?

As for Ms Winters, she did eight Westerns. After a small part as one of the saloon gals in Red River, she was in Winchester ’73, although in that one the cowboy doesn’t love his horse or his woman; he loves his gun. Winters said: “Here you’ve got all these men – Stewart, Duryea, Hudson, McNally, Drake, the rest of them – all running around to get their hands on this goddam rifle instead of going after a beautiful blonde like me. What does that tell you about the values of that picture? If I hadn’t been in it, would anyone have noticed?” Well, quite, Shelley, you have a point there. Also in 1950 she took the lead as Frenchie in the color Destry remake. Untamed Frontier with Joseph Cotten, ho-hum, Saskatchewan with Alan Ladd, even ho-hummer, The Treasure of Pancho Villa with Rory Calhoun, whatever picture it was, she always looked out of place in an oater – too, er, plump, too ‘brassy’ (is that the word?) and too urban. Oh well. She is quite good in The Scalphunters, though, I must say, and even Savalas isn’t bad. Of course they both play it up.

Shelley not really in her element in this genre 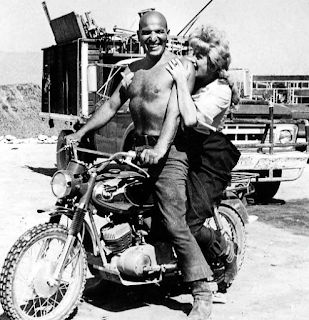 It’s a good-looking picture. The DP was Duke Callaghan (some attractive Westerns to his credit and he would later do the visually superb Jeremiah Johnson for Pollack) and he shot it in Color DeLuxe and Panavision in some lovely Arizona and Mexico locations. The modern print is high quality, and it’s on BluRay if you want.

There are some good stunts, though too many horsefalls. Burt talks to his horse a lot and this verges on the silly but he just about gets away with it. It’s one of those nags that comes when he whistles. There’s a whole bit with locoweed that I didn’t find funny, and a whole lot of ‘chirpy’ (read, irritating) music to accompany it. Talking of the music, it’s by Elmer Bernstein, so that’s a huge plus. His score was the only good thing about The Hallelujah Trail (it’s fab, almost Magnificent Seven quality), though as I say, I could have done without the ‘comic’ parts. Otherwise, it’s very nice. 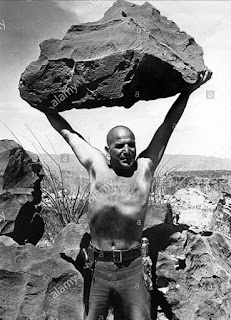 All in all, it’s entertaining, if light material. Brian Garfield was a bit down on it, calling it “clumsy and unwieldy” and suggesting that it only got good reviews because liberals liked the modish black-white treatment and because there was no other Western that year to praise. He had a point on that last suggestion.

He’ll get those furs back, whoever has ’em
PrevPreviousThe Hunting Party (UA, 1971)
NextBlood Country (Running Wild, 2017)Next