Part of the reason is its director Arthur Penn. He won Broadway’s 1960 Tony Award as Best Director in 1980 and he directed 8 different movie actors in Oscar-nominated performances, and many people would regard him as one of the great directors of his time but Western fans may not agree with that judgement. The Left-Handed Gun was interesting in some ways but was essentially mannered and overwrought. Little Big Man teetered dangerously on the edge of parody. And The Missouri Breaks was fundamentally a bad Western. 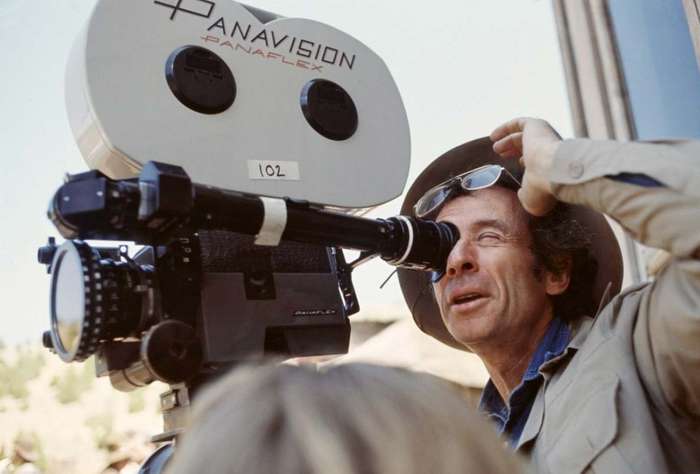 Another reason is Jack Nicholson. I’m a fan of his in other genres but not in Westerns. Those two low-budget mid-60s Monte Hellman pictures, Ride in the Whirlwind and The Shooting, were quite interesting, in an oddball way, but Goin’ South was unfunny (I thought) and he overacted in it. And he has a particular very Jack Nicholson style in The Missouri Breaks but it doesn’t quite ring true somehow. Many people think he’s good in it, but I don’t. 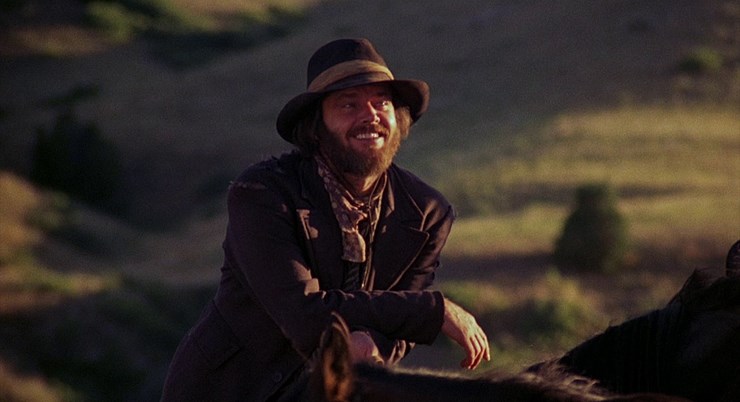 But the principal reason I dislike the film is because of its star, Marlon Brando. I know I’m in a minority on this, and like Arthur Penn, Brando is considered by many to be one of the greatest exponents of the cinematic art. The IMDb bio starts with the sentence “Marlon Brando is widely considered the greatest movie actor of all time, rivaled only by the more theatrically oriented Laurence Olivier in terms of esteem.” As a young man I admired Brando’s Stanley Kowalski in A Streetcar Named Desire and his Terry Malloy in On the Waterfront. They made a big impression on me. But as I grew older I found his performances overdone and even hammy. Grandstanding Fletcher Christian in Mutiny on the Bounty? Padded-cheeked Don Corleone mumbling his way through The Godfather? Col. Kurtz in Apocalypse Now? Not for me. And in our noble genre his record was less than distinguished – and that’s putting it mildly. The only Western he was good in (in my view) was Viva Zapata!, and that was hardly a Western at all. The other three were poor. The Appaloosa in 1966 was an over-arty two-revolver picture in which Brando struts about hammily in a fright wig and false beard, and we never for a moment believe in him as his character. It’s just Marlon Brando. One-Eyed Jacks was similar – mannered, and a curious mixture of the violent and the soppy. He directed it also – and not very well. As actor, he is not at all credible as a real tough gun hand – he is almost foppish. And in The Missouri Breaks, as gun for hire Robert E Lee Clayton, he is absolutely awful.

There. Agree with those judgements at your peril. Peril of character assassination from French cinéastes anyway. 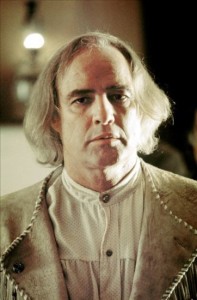 Mind, I’m not entirely alone. Brian Garfield, praise be unto his memory, said this of Brando in The Missouri Breaks:

“[His] gunslinger ‘regulator’ is contemptible, self-indulgent caricature and belongs in some other movie. Brando, at a gross 250 pounds, looks like a hippo on horseback; his bewildering costume changes (from Buffalo Bill flamboyance to Mother Hubbard drag) are absurd; he speaks alternately with three odd accents (Irish brogue, Plains twang, supercilious English twitter) and one can see his eyes drift towards the off-camera cue cards he uses because he’s too lazy to memorize lines. It bothers me that a man with so little respect for his own profession continues to accept enormous sums of money for work that he holds in contempt. This movie should be held that way too.” 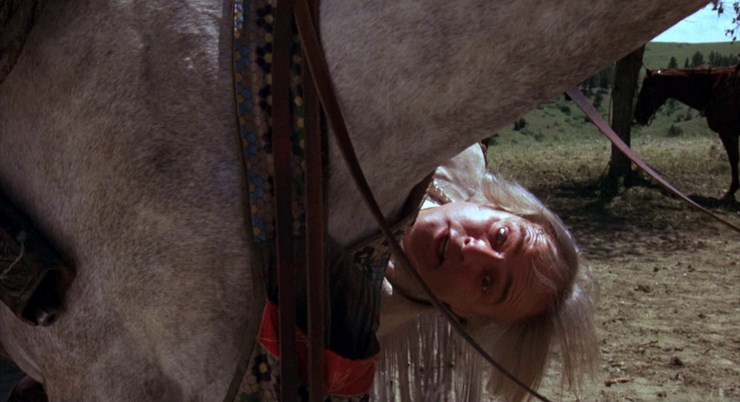 The stars were hot properties, though. Nicholson had just won an Oscar for One Flew Over the Cuckoo’s Nest and Brando was still trading on his 1972 Oscar for The Godfather and nomination for Last Tango in Paris. 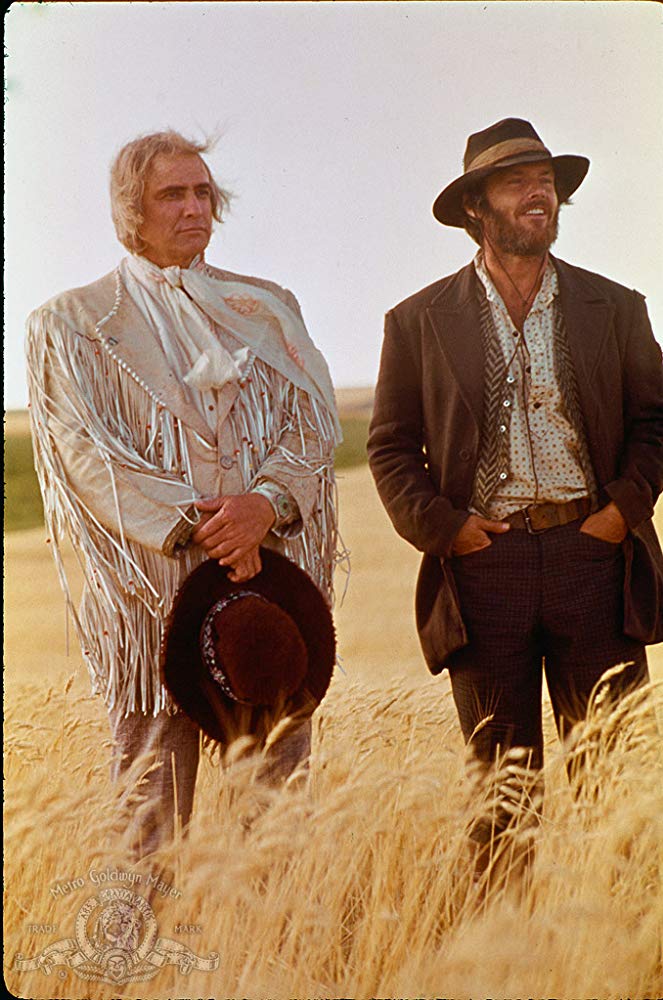 The movie isn’t all bad. It was produced (by Elliott Kastner) on a big budget and it looks good, shot in attractive and ‘Western’ Montana locations in color and Panavision by Michael C Butler (his only Western). 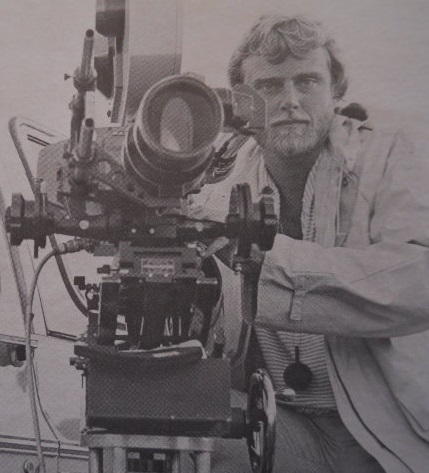 It had music by John Williams, though I didn’t like it this time. Too much is irritatingly ‘comic’, signaling to us who are too dumb to know which bits are supposed to be funny. Harry Dean Stanton is very good in it – in fact he damn nearly steals the show. And I thought John McLiam was also strong as the mighty cattle baron. So yes, it had its moments. 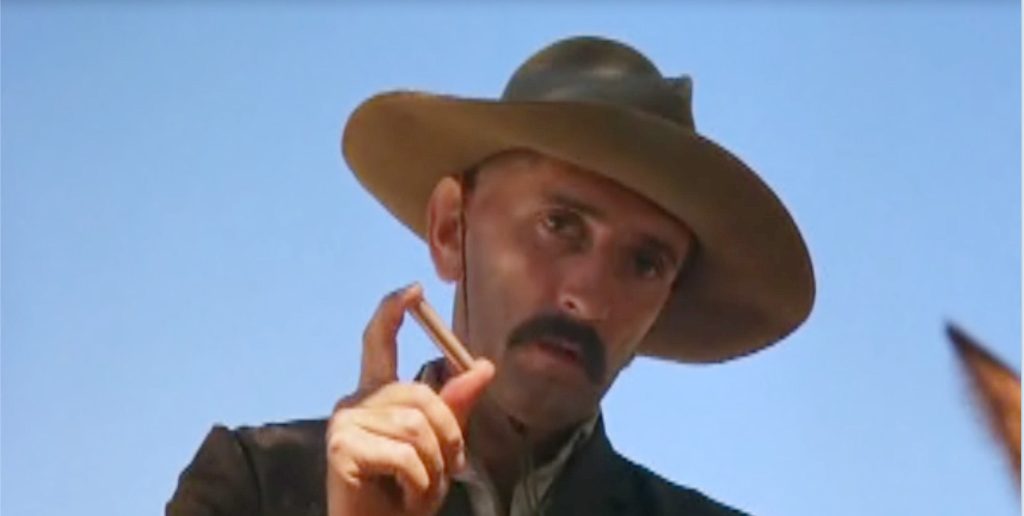 And some people liked it. The Los Angeles Free Press called it “the most important film of the year” and called it a “hilariously funny, disturbingly romantic, picaresque movie.” Tom Dawson of the BBC said, “Brando’s performance, which accentuates Clayton’s whimsicality, effeteness and sadism, is enjoyably strange, and deliberately at odds with the naturalism of the rest of the cast” and added that “this appealingly eccentric revisionist western highlights the critical importance of violence in establishing ‘civilized’ society in the American wilderness.”

But it’s too long, the thin story (Thomas McGuane, below, and Robert Towne) not substantial enough for the 126-minute runtime. It drags. 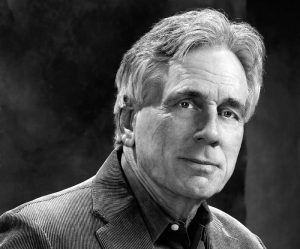 Director Penn said that Tom Horn was the inspiration for Brando’s character, and writer McGuane is a Tom Horn expert (he would write the screenplay of Tom Horn in 1980) but in reality Brando’s lilac-smelling fop is about as far from Tom Horn as you could possibly get. No, Mr Penn, that won’t wash.

Vincent Canby in The New York Times makes the point that the story was better done the year before in Rancho De Luxe, also written by McGuane. However, in The Missouri Breaks, “the characters are just as bored, confused and directionless as they are in 1975, and they, too, look back to some dimly remembered period when the old days were good.”

I quite liked the bit where Harry Dean and some friends rustle Canadian Mounties’ horses while they are dutifully in church stolidly singing Bringing in the Sheaves. Afterwards, the RCMP get their mounts back, not all that properly. “It’s not even legal!” one of the rustlers complains, like a child, as if his rustling had been.

It would have been much better if Tom Logan (Nicholson) had shot Clayton in the bath tub scene. That would have shortened the film and put a merciful end to Brando’s mug show. 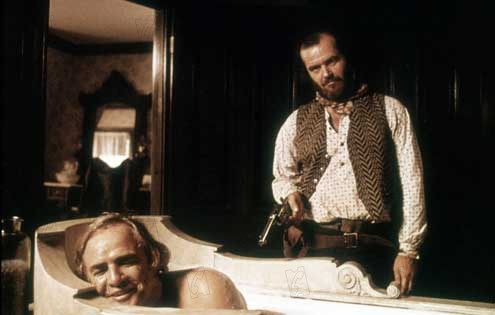 I remember being shocked by Clayton’s eventual demise, though, and even watching again now it’s quite powerful.

The 1970s, which started with revisionist Westerns such as Dirty Little Billy, doing a hatchet job on Billy the Kid, and Doc, doing the same for Wyatt Earp, then Soldier Blue, demolishing the reputation of the US Cavalry, and Penn’s own Little Big Man, lampooning Custer, didn’t get much better by the mid-decade point. The Western was definitely in crisis. But at least those pictures weren’t actually boring, like this one.