Too long and dreary

.
.
Continuing with our season of iffy 70s Westerns, this one, with a faux-poetic title, was certainly one of the weaker attempts. It was directed by Alan J Pakula, a popular and successful filmmaker of the time who directed, produced and/or wrote a series of hit movies such as To Kill a Mockingbird, Klute, All the President’s Men and Sophie’s Choice, among others. Westernwise, he only has one other credit: he produced The Stalking Moon in 1968, a Gregory Peck oater that I rather like. A good thing too, because if his Western record were to be judged only on the basis of Comes a Horseman, it would be verging on the dismal.
.
. 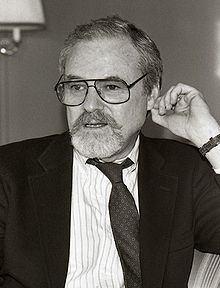 The story came from an original script, Comes a Horseman Wild and Free by Dennis Lynton Clark, who at the start of the decade had worked on two Richard Harris Westerns, also pretty weak, A Man Called Horse and Man in the Wilderness.

Pakula and Clark put together a contemporary Western (it’s set in the 1940s) which contains many of the tropes of the genre (stampede, bushwhack, saloon brawl, last-reel shoot-out, etc) but which still manages to commit that cardinal sin for a Western – it’s boring.

Variety said the film was “so lethargic not even Jane Fonda, James Caan and Jason Robards can bring excitement to this artificially dramatic story of a stubborn rancher who won’t surrender to the local land baron.” That’s true. 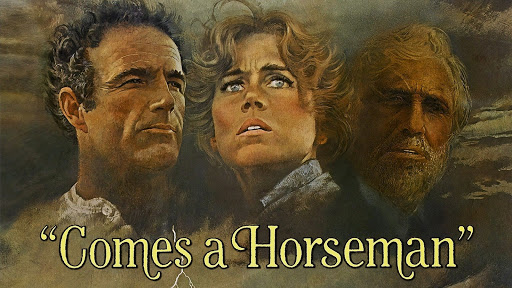 Robards in particular was a fine actor who from a Western point of view will probably be
chiefly remembered for his Cheyenne in Once Upon a Time in the West – unfortunately, really, because he did much better oaters than that. I liked him as gambler Drummond in A Bih=g Hand for the Little Lady and I thought he was a very good Doc Holliday in Hour of the Gun. He was also fine for Sam Peckinpah as Cable Hogue. In Comes a Horseman he plays JW (not JR) Ewing, the clichéd ruthless rancher who wants the whole valley, in the way that ruthless ranchers are wont to do. But the script of Comes a Horseman is such that even Robards can’t communicate what really makes his character tick. 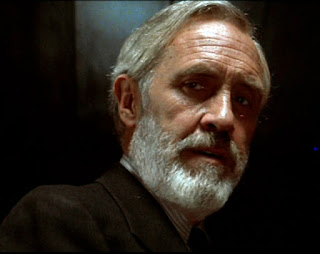 Even Robards can’t make a go of it

Jane Fonda, as Ella, the rancher under threat from such land-grabbing malevolence, I am less fond of as a Western actor, though she only did three. She was in another contemporary one, The Electric Horseman, also a mixed bag, as well as being famous as Cat Ballou.

As for James Caan, he always seemed to me too urban, somehow, and too 1970s to be good in Westerns. He did five (depending on your definition of Western), most famously as Mississippi in El Dorado, but nothing much else of note. He plays Frank, the young cowpoke at the center of the action. Nursed back to health by Ella after being shot, he unites with her against the depredations of Ewing, and despite her initial hostility (“Soon as yer fit yer gonna be movin’ on”) they become lovers. But Caan’s Frank seems to be, well, without personality. 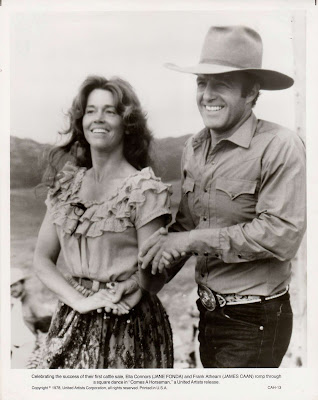 The best acting comes from Richard Farnsworth as the elderly cowhand Dodger. Farnsworth was a stuntman who, after more than 30 years in the business moved into acting and became an acclaimed and respected character actor. He participated, in one role or another, in a remarkable 77 feature Westerns and also a huge number of TV shows, from Wells Fargo in 1937 to his lead (and excellent he was too) in The Grey Fox in 1982. Especially touching, I thought, was the way that, badly injured, he used a chair to mount up because he wished to die out in the wilds, a case, perhaps, of twisting the old cowboy song into Bury me please on the lone prairie. 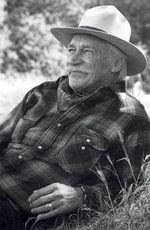 The movie is way too long at a whisker under two hours and the pacing is such that it often drags, despite the occasional flurry of ‘Western’ action.

It’s quite attractive from a visual point of view, with cinematography by Gordon Willis, who also shot Bad Company, of pretty Arizona locations, though Brian Garfield said, “the camera is invariably too far from the action or too close to it.” I didn’t really notice this, I must admit.

Garfield also said that the picture is “both pedestrian and lugubriously overblown”, and added that “self-consciousness colors every frame.” I think he hit the nail on the head there. It’s as if the makers self-consciously set out to make a good-looking Western with all the ‘classic’ Western action in it but forgot the true spirit of a Western along the way.

“The theme of this film is very, very American,” said Pakula himself. Maybe, but Charles Champlin of The Los Angeles Times wrote that the film “is not about the plot as such but about the way of life which the plot interrupts.” OK. But he added, “The care and authenticity with which that way of life is recorded helps Comes a Horseman overcome some real problems, notably a pace that is all too reverentially slow and a totally inadequate delineation of the Robards character.”

Gary Arnold of The Washington Post wrote, “Pakula and Clark may believe they revere Westerns, but their form of respectful imitation is lifeless, strictly token respect for the dead. By the time Comes a Horseman wheezes to an anti-climactic fadeout, Robards’ depradations [sic] have begun to resemble Gothic camp.”

The movie is, as Garfield says, “a bore.”