In the Rogue Blood by James Carlos Blake

In the Rogue Blood is a novel of the 1840s West. The story is of two brothers, John and Edward Little, who grow up in Florida with “a whore mother and a homicidal father”, and it climaxes during General Winfield Scott’s 1847 campaign against the Mexicans, and in particular his attack on Mexico City, in which by a combination of curious circumstance the brothers find themselves fighting on opposite sides.
.
. 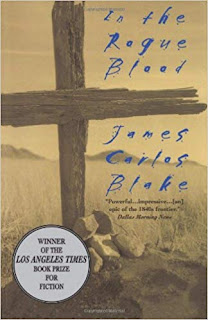 Blake (born 1947) had already published two ‘Western’ novels, The Pistoleer (1995), which
tells of John Wesley Hardin, and Thye Friends of Pancho Villa (1996), which concentrates on the life of Villa’s private executioner Rodolfo Fierro. In the Rogue Blood came out in 1997. 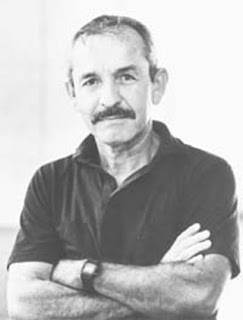 The brothers combine in the killing of their abusive father and are ever after haunted by it. They leave Florida to make their own way in Texas and of course many adventures happen along the way, allowing Blake to give us a picture of the 1840s south. They fetch up in New Orleans but are dramatically separated there. They will only be reunited at the very end of the book, and much of the narrative deals alternately with the separate progress of John and Edward, or Ward as he is known.

Both brothers harbor lustful thoughts for their sister, and Blake seems to have a morbid fascination with incest (see his 2000 novel about Bloody Bill Anderson, Wildwood Boys). The grisly fate of this girl, sold into prostitution, is one of the bleaker aspects of an already bleak book. In some ways we might be reminded of The Searchers, with the brothers hunting their abducted sister, but In the Rogue Blood is very far indeed from Alan Le May or John Ford. To film it would need Peckinpah and Brian de Plasma at the very least. And even they would run out of gore.

For the bleakness is mixed with savagery, not only in the Mexican war. Casual lynchings, murders and rapes pepper the narrative. A Kirkus review cataloged the violence this way: “People are shot, clubbed, knifed, eviscerated, castrated, decapitated, impaled, flayed alive, hanged, scalped, dismembered, blown up, and immolated.” The gruesome violence, the seemingly predestined disaster and the noir tone combine to make the novel very far from light reading. 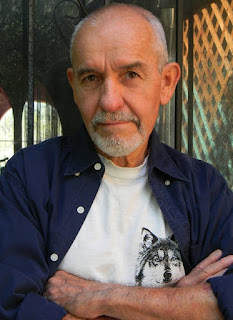 But Blake writes very well. His tone is literary and he attempts a vaguely Victorian prose style but without losing ‘Western’ power. Though Blake certainly has his own ‘voice’, we are reminded slightly of Larry McMurtry, or even, at times, almost of Cormac McCarthy.

Speaking of Cormac McCarthy, a key part of the story comes when Ward joins a band of scalphunters who murder Apaches, including women and children, for the bounty that the Mexican government offered on their scalps. McCarthy’s Blood Meridian came out in 1985 and you feel that Blake must have been influenced by it. Blake even has an ‘intellectual’ semi-priest in the loathsome band of scalpers who philosophizes to the others.

“I am the fourth generation of men in my family to be born in Mexico, all of us descendants of an American who himself was sired by an English pirate,” Blake explains in his introduction to Borderlands, his recent collection of short fiction. Blake’s childhood and family heritage is rife with swashbuckling and the crosscurrents and conflict of mixed blood and clashing cultures of the borderlands where he grew up. No wonder he writes such wild, adventurous literature. The pirate was shot by a firing squad in Veracruz. The pirate’s grandson was a patrón who was knifed to death on the church steps by a disgruntled employee. Blake himself is a product of the Texas/Mexico borderlands and the swamps of south Florida, where he earned money in high school catching and selling poisonous snakes. “The big benefit of my itinerant boyhood — in Mexico, Texas, the Southland — was the variety of voices it gave me,” says Blake. “What my books have in common so far is that they’re all set in the past, between the mid-19th-century and the era of Prohibition. It’s an exciting historical span, full of its own wild energy.”
There have been plenty of American coming-of-age novels, but few as black and bleak as this one. Mr Sublett called it “quite likely the most violent book in American literature”.
PrevPreviousComes a Horseman (UA, 1978)
NextOne Man’s Hero (Orion, 1999)Next