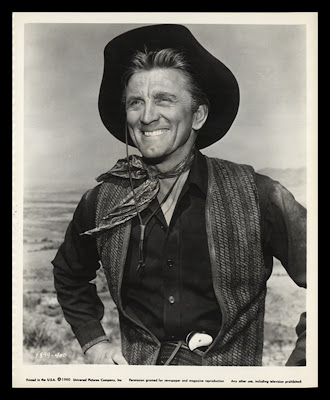 And don’t forget he was a derringer user in The Last Sunset
.
.
I was sad to hear this morning of the death of Kirk Douglas, at the grand old age of 103. He was the very last of the Western actor giants from the golden age of our beloved genre. Amazing to think he was born in 1916, the year of silent Westerns such as Hell’s Hinges and  The Half-Breed. Kirk’s first Western as lead was in Along the Great Divide in 1951, directed by Raoul Walsh, when I was three (and I’m an old codger now).

Of course most people will remember him for his non-Westerns. He was thrice Oscar-nominated, for the early boxing role Champion, for being Vincent van Gogh in Lust for Life and for The Bad and the Beautiful with Lana Turner, and he was unforgettable as Spartacus. But we honor him for different pictures, eh? His Jim Deakins in Howard Hawks’s filming of the AB Guthrie novel The Big Sky in 1952, for example, or as the Man without a Star for King Vidor in 1955, or as The Indian Fighter for André De Toth the same year. Westernistas will mainly, I think, give him credit for the two oaters Kirk made for John Sturges, as Doc Holliday to Burt Lancaster’s Wyatt Earp in Gunfight at the OK Corral in 1957 and as the tough lawman arresting his friend Anthony Quinn’s son in Last Train from Gun Hill in ’59. He was superb in both. Amazing to think we have only just lost a leading actor from the golden age of the Western, the 1950s.

Myself, I have a Kirk Douglas favorite and it’s none of the above but rather the 1962 contemporary Western Lonely are the Brave, an absolutely magnificent movie in which, in my view, Kirk was never better.

Burt Kennedy, who directed Kirk in The War Wagon with John Wayne (that must have been a handful for a director) said of him, “The people who are good are the ones that can be difficult.” And it is true that he was not always the easiest of colleagues on the set, or the most popular. On The Way West, assistant director Terry Morse said, “Kirk was arrogant and rude to everybody. That’s the kind of guy he was, and nobody really liked Kirk. He wanted everything his way. He was not a pleasant person to be around.”

Furthermore, his Western reco The Villain are almost unwatchably bad. But then which Western star made only great Westerns? No one, not even Coop.

And anyway this isn’t the time to remember the downsides. Instead, let’s get out that already much-used DVD and watch Kirk cough into his handkerchief and march with Wyatt down to the OK Corral. Better yet, put Lonely Are the Brave on.

Now, dear e-readers, you can have fun matching up the pictures to the Westerns:
.
.