In 1968 Ossie Davis appeared in a comedy Western written by William Norton and produced by Arnold Laven, and the following year he did it again. The Scalphunters in ’68 benefited from Burt Lancaster in the lead and had some weight, but in Sam Whiskey another Burt topped the billing, Burt Reynolds, and it was an altogether more lightweight affair.
.
. 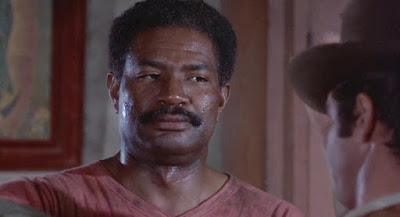 Reynolds would later become hugely famous for the likes of Deliverance and Smokey and the Bandit but he made his start in Westerns in the 60s, on TV and on the big screen, taking the title role in the spaghetti Navajo Joe in 1966, and the month before Sam Whiskey was released he appeared in 100 Rifles. He didn’t do that many feature Westerns – four, in fact (in ’73 he  would be The Man who Loved Cat Dancing, also written by Norton). But he handled them well, in a charming-rogue kind of way. 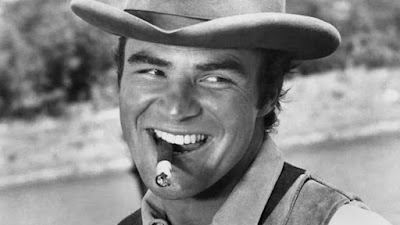 Burt does his thing

Sam Whiskey was directed by Mr Laven as well as produced by him. As director, Laven made three Westerns before this one, Geronimo (the Chuck Connors one), The Glory Guys (taking over from Sam Peckinpah) and Rough Night in Jericho. He seemed to know what he was doing, even if none of the Westerns he helmed was all that good – Rough Night, with a good cast headed by Dean Martin, being about the best. 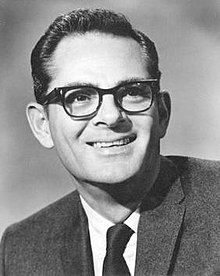 Sam Whiskey is really a Western caper movie, with a raid on the Denver Mint as the main event, though with the twist that the aim is put gold back into the Mint rather than remove it.

Much depends on the relationship between Sam (Reynolds) and Jed (Davis) but not as much as in The Scalphunters. There, the black-white thing was slightly edgy, almost risqué (we were in full late-60s civil rights movement mode) but in this one there isn’t even a hint that it might be odd to have two buddies of different races. Everyone treats Jed completely normally. That’s a good thing, without doubt, but it was supposed to be the late nineteenth-century West and one wonders how authentic that would have been…

Talking of authentic, I’m afraid Angie Dickinson wasn’t. At least not in her appearance. She is loaded with 1960s make-up (mascara applied with a trowel) as she seduces (literally) Burt into carrying out her scheme. Of course she was very beautiful, anachronistic cosmetics or not, and I think Burt enjoyed those scenes. So much so, in fact, that he had a still of him and Angie in bed together blown up and then hung it over the top of the bar at his house, with a caption reading An actor’s life is pure hell. 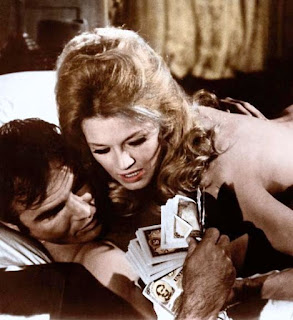 Well, someone had to do it

This was a full decade after Angie’s Feathers had been ruffled by John Wayne in Rio Bravo and it was her thirteenth feature Western (not to mention a lot of Western TV shows) so she was by now an old hand at the business.

In the opening scene Sam walks into town having lost his horse to a Yaqui Indian (perhaps a sly reference to his earlier role of Yaqui Joe in 100 Rifles) and is desperate for a bath, but the local blacksmith (Ossie) has dibs on the tub and won’t give way. They fight, but Sam still doesn’t get to bathe first. He ends up in the horse trough in the street. Now the glam Laura Breckenridge (Angie) arrives, holding a birdcage (maybe she was quoting Destry). She says Pinkerton’s have recommended Sam for a task she has, recovering a quarter of a million dollars in gold from the bottom of the Platte River and getting it into the US Mint in Denver before anyone realizes that the ‘gold’ currently there isn’t gold at all. Yes, I know, but plausibility isn’t exactly this film’s strongest suit.

Sam agrees (the next morning) and hires Jed the smith to help, and together they go off to recruit a certain OW (Clint Walker), an inventor. The trio will attempt first to raise that bullion from the sunken riverboat. OW has something useful to bring to the expedition – a Gatling gun. 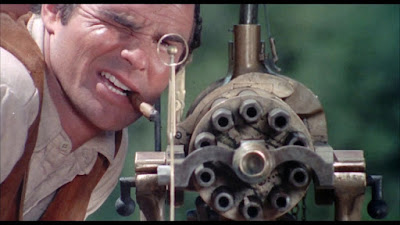 It will come in handy

Clint was of course very well known as a Western actor, having been Cheyenne Bodie on ABC from 1955 to 1962, but doing quite a number of big-screen Westerns too, from Fort Dobbs in 1958 to Yellowstone Kelly the year after, and others, including The Night of the Grizzly in 1966. Here, he towers above the other actors, as usual, and brings a great deal of brawn to the enterprise, but he is also a scholar, given to quoting Socrates and Plato. Also as usual, his hair is suspiciously black, but we’ll let that pass. 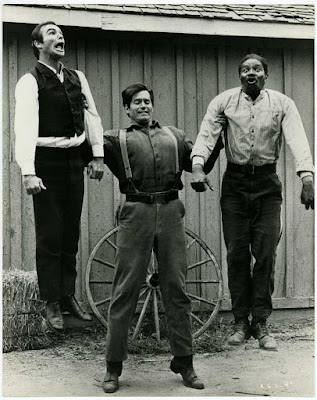 Clint does the heavy lifting

The party is shadowed by a mysterious fat man in pebble glasses who, we learn, is Fat Henry Hobson (Rick Davis). Is he a detective, perhaps? 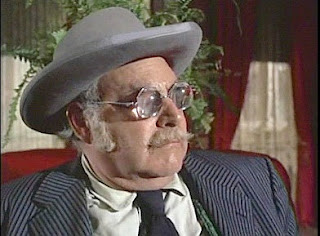 Well, various adventures ensue but they finally get the gold and set off for Denver, joined now by Laura. The rest of the movie is set in the Colorado capital, where they contrive an elaborate plan to get the gold into the heavily-guarded Mint.

Chubby Johnson, in his last movie, has a cameo appearance as the blacksmith whose forge they take over (they need it for smelting, but I won’t go into details except to say that it involves George Washington’s broken nose).

There’s slightly annoying ‘comic’ music by Herschel Burke Gilbert, and rather bright colors (it almost looks like a spaghetti) to the Technicolor shot by Robert C Moreno. The movie is also too long at 1 hour 36 minutes and should have been cropped. 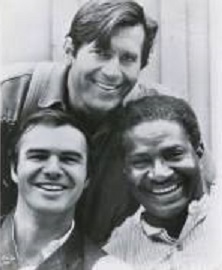 They seem to be enjoying it

It wasn’t a huge hit, I fear. When asked about it Burt Reynolds replied “It was way ahead of its time. I was playing light comedy and nobody cared.” Oh, it’s harmless enough, if you like that kind of thing, but remember it was competing with Butch Cassidy and the Sundance Kid, which, released the same year, kinda cornered the charming-rogue Western market. Brian Garfield said that the comedy in Sam Whiskey falls flat on its face. Vincent Canby in The New York Times said, “Comedy Westerns aren’t my favorite form of entertainment and Sam Whiskey is certainly not one of the best of the breed,” and he certainly had a point there. He added, “The movie … has a kind of clumsy charm, most of it contributed by the performances of Reynolds, who bears a creepy resemblance to Marlon Brando.” Not sure about that, Vince, and I don’t think that would be exactly praise even if it were true. Say what you want about Reynolds, he was a much better actor than Brando. 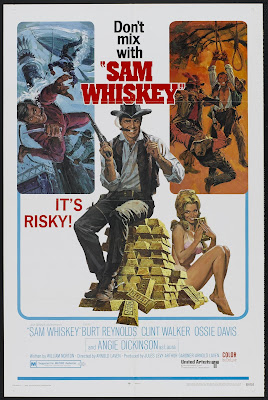