.
.
Jay Silverheels wasn’t only Tonto. In different movies from 1937 to 1973 he was Geronimo (three times), Satanta and Red Cloud, as far as real chiefs go, as well as countless fictional Indians, including Chingachgook in The Pathfinder. Now he added Tecumseh to his list. In fact The Pathfinder and Brave Warrior were both Sam Katzman productions released by Columbia in 1952, Brave Warrior in June and The Pathfinder in December. And they were both early single-shot musket yarns with Jay as goody. Perhaps they used the same costumes and props. I mean, 1754, 1811, what’s the difference, right?
.
. 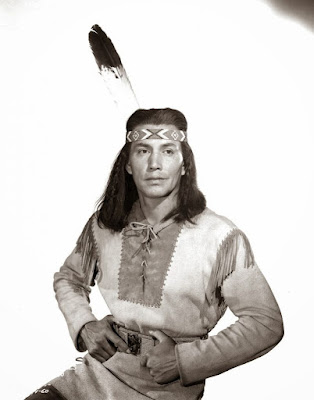 Jay does his thing

Katzman started as a prop boy at Fox in the year dot, worked his way up to assistant director on low-budget fare and would be a Hollywood producer for forty years. Westerns for minor studios were something of a specialty with him, but he also worked with bigger outfits, like Columbia. Director William Castle wrote that Katzman “was a smallish man with a round cherubic face and twinkling eyes. Few people in the motion picture industry took him seriously as a producer of quality films, but to me, Sam was a great showman.” Many Katzman Westerns were, shall we say, at the cheaper end of the spectrum, but occasionally there was a darn good one – Utah Blaine, for example, also for Columbia.

You get the feeling that Jay had become Hollywood’s tame Indian, and when Sam offered him the part he probably said resignedly, “Me do.” But work is work, I guess. Actually, for what it’s worth; I always thought he was rather a good actor.

Now Katzman’s movies weren’t exactly famous for being accurate historical documents. Of course Hollywood Westerns rarely were, but Sam didn’t just tinker with history. He rewrote it wholesale. Or anyway his writer did. That was Robert E Kent (who also penned The Pathfinder), himself to become a well-known producer but certainly at this time anyway better known for churning out screenplays. He and Katzman cooked up a plot for Brave Warrior that probably had history teachers in grade school reaching for their smelling salts. You see, in this one Tecumseh is not the ally of the British, seeking to establish a confederacy under their protection, but is actually a real fan of the US way of life, especially its religion, schools and roads. And he is in love with a redhead white gal, and wants to marry her. As if. In 1952? In any case, she is actually not reciprocally enamored and prefers Jon Hall.

Mr Hall tops the billing as the hero of this fable. Screentested in 1936 for the role of Flash Gordon (Universal gave it to Buster Crabbe), he instead started, as Charles Locher, in 1930s rom-coms and as a Tahitian native in Mutiny on the Bounty (his mom was Tahitian). He had small parts in a John Wayne oater and a Charles Starrett one in the late 30s but made it big as Kit Carson in Edward Small’s 1940 production (released by United Artists) of the same name – with Dana Andrews as Frémont. Through the early and mid-40s he dallied with other genres (he was the Invisible Man, for example) but in 1947 he led in three mid-budget Westerns. Brave Warrior was his last, though, of only nine in total. And to be brutally honest he does look a bit past his sell-by date. 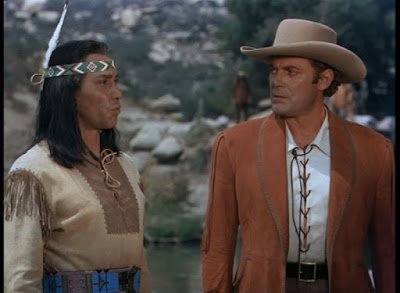 Hall in his last Western

When I was at school, we learned that in the time when the British (called the English in the script) and the Americans were getting cross with each other, a disagreement that would lead to war in 1812, the Shawnee leader Tecumseh and his brother Ten-sqúat-a-way, known as ‘The Prophet’, founded a large, multi-tribal community in what we now call Indiana. This place, known to the whites as Prophetstown, but in the movie Tippecanoe, became the center of the political and military confederacy of tribes that the brothers were trying to put together. Their dream was an independent state for Native Americans west of the Mississippi under British protection. 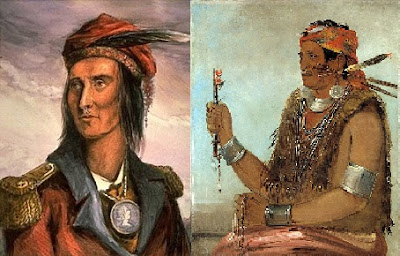 Tecumseh and his brother Ten-sqúat-a-way, ‘The Prophet’

We open with an attack on a raft carried out by some Brits in plain clothes led by tough Captain Demming (George Eldredge, Dr Tobor in Captain Video but a regular in Westerns – usually as the heavy – since 1940). This vessel is carrying salt for the Shawnee as part of the US’s deal with them. By grabbing it, and then blowing it all up in the river, the sneaky Brits get the Indians to believe that the brave US is reneging on its deal. As if. 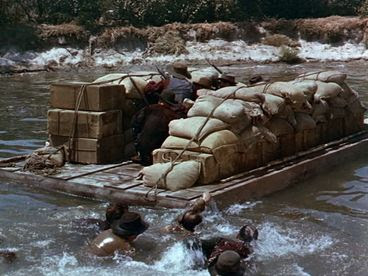 Now we meet the Shawnee. It was traditional in Hollywood Westerns, as Robert Kent knew well, to have a firebrand Indian brave who favors the warpath and a more statesmanlike one who is all for peace with the white eyes. This time it’s the peace-loving Tecumseh
(Silverheels) vs. his bellicose brother The Prophet (our old pal Michael Ansara, later to be Cochise in the TV Broken Arrow, and in that he would be the wise statesman while elsewhere Silverheels would be the firebrand Geronimo, but I guess they took turns). The Prophet wears an eye-patch because the Yankees caused him to lose an eye, and he wants revenge for that. Well, Tecumseh manages to quieten the war-party at least for long enough for him to visit Governor Harrison in Vincennes and find out why that salt didn’t get through. 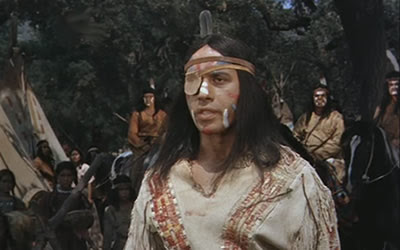 Ansara is The Prophet

This Harrison (James Seay) is of course the future ninth president of the USA (for 31 days anyway, till he succumbed to the nineteenth-century version of Covid 19), he who got elected on the famous slogan Tippecanoe and Tyler too. Here he is chief goody, ally of Tecumseh, eager to have peace with the Indian peoples, as well as defeat the pesky Brits, naturally. He hires a kind of (fictional) secret agent, Steve Ruddell (Hall), who grew up with Tecumseh and is his blood-brother, to aid him in this quest. 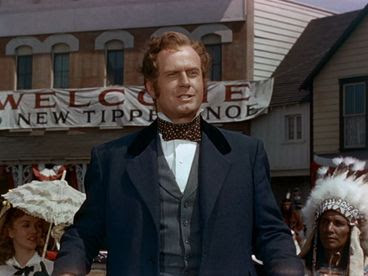 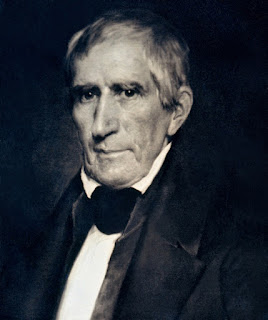 Unfortunately, the warlike Prophet does not wait for the outcome of the Tecumseh/Harrison parlay but launches an exciting raid on Vincennes, robbing the stores of all the salt AND loads of ammo. Uh-oh.

Now we meet a certain ‘Mr Bancroft’, in reality British General Proctor not in uniform (we’re not yet at war so I guess not technically a spy). He has come down from Canada to mastermind the anti-US efforts in Indiana. Bancroft/Proctor is played by Leslie Denison, an actual Englishman (born there anyway). He is in cahoots with a Scottish merchant of the town, McGregor (Harry Cording, also English-born but with a Scotch accent worse than mine would be). And it is this two-timing rascally merchant whose daughter, the fair Laura (Christine Larson, aka Larsen, a regular on Jimmy Wakely and Johnny Mack Brown oaters and rumored lover of Ronald Reagan even after he met Nancy, shock, horror), is the beloved of Tecumseh (though really she loves Ruddell). Laura is all-American and would be mortified to learn that her daddy was a double agent working for her country’s enemies, though she never finds out (gallant hero Ruddell tells her in the last reel that he died a hero). 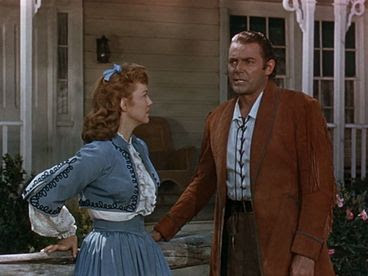 I’m afraid Tecumseh is going to get cut out 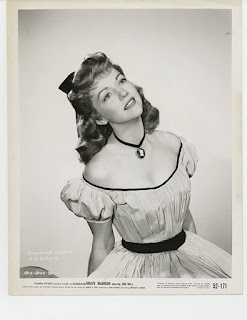 She did her best

The Cain-and-Abel-like rivalry comes to a head when The Prophet and Tecumseh agree to mortal combat with tomahawks to see who will be chief of the Shawnee. So Silverheels and Ansara have a good bit (or their stunt-doubles do anyway). The thing is, though, that Tecumseh wins but spares The Prophet’s life, exiling him instead. The vanquished goes off muttering Grrr, you know how they do, and we know there will be trouble in store.

Now our resourceful hero (for despite the title it’s the white man who is the hero, of course) works out who ‘Mr Bancroft’ really is, and upbraids him. But the general’s henchman, that same Capt. Demming who led the assault on the salt raft, bonks Ruddell on the head, and the two Britishers make their getaway.

This is all gripping stuff, you will agree.

McGregor arranges an attack led by the renegade Prophet on his own farm, to throw the enemy off the scent. He hopes to get Ruddell killed, while sparing his daughter. So more excitement and action ensues.

Meanwhile, Tecumseh is fulfilling his dream by building Tippecanoe, a white man’s town for Indians. Very quickly buildings, even brick ones, shoot up and we have what looks suspiciously like Corriganville, but hey. In fact all through the movie the standard California locations make an odd-looking Indiana, but what is one to do? Ship the whole cast and crew out to Indianapolis? Not on that budget, dudes.

The climax approaches and the Battle of Tippecanoe looms. Not with Tecumseh because he’s gone off down south to rally the other tribes, leaving the field clear for the evil Prophet. So it’s
The Prophet who burns down Prophetstown, not Harrison. Talk about fake news. The Americans have captured some artillery from the Brits, thanks to the brilliant guerrilla action of Ruddell, and they fire these guns at the attacking Indians (curiously, they load them with roundshot cannonballs but they explode like shells when they land; odd, that) and drive them off, but not before the rascals have burned the new town to the ground. Actually, the battle is a bit on the perfunctory side, the budget being what it was, I suppose. Apparently a third of the budget went on explosives, so that didn’t leave much for the rest.

The Brits are thwarted, Tecumseh comes back and is sad in the ashes of his dream, Ruddell gets the girl, The End. 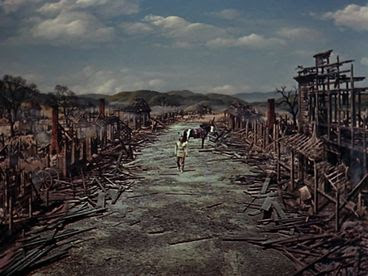 I must say, it’s a load of old tosh from start to end.

Still, I’m not one to turn down a 1950s action Western, however batty/bonkers/cuckoo the plot. And the Technicolor’s nice.

It was directed by Spencer Gordon Bennet, known as “The King of Serial Directors” (and his epitaph reads “His Final Chapter”). Born 1893, Bennet entered the movie business as a stuntman but became known as a director of silent movies in the 1920s. He first directed a Western in 1927, the serial Hawk of the Hills. He helmed a lot of Ken Maynard and Robert Allen oaters in the 30s, moving on to Tex Ritter and Bill Elliott in the 1940s. His last outing was the nostalgia-fest 1965 picture The Bounty Killer.

PrevPreviousThe geography of the Western
NextThe Fighting Redhead (Eagle-Lion, 1949)Next

PrevPreviousThe geography of the Western
NextThe Fighting Redhead (Eagle-Lion, 1949)Next
Jeff Arnold © 2022 – All rights reserved – Designed by BetterCallChris
Scroll Up