What was the gun that won the West? Many people would say the Colt .45, and judging by its appearance in Western movies (including those set in the 1860s before the gun was invented) they’d be right. Every cowboy had one on his hip and gunslingers were lightning-fast at drawing them. Others might opt for the Winchester rifle. That appeared in every other Western too, and Anthony Mann even made a whole movie about it. Myself, I’d go for the shotgun. It was ubiquitous, didn’t jam, was deadly at close range and required low levels of marksmanship. I am reminded of that scene in Unforgiven when hog-farmer Clint tries to hit a target with his six-gun but is rusty; he misses the whole time. So he goes inside, returns with a shotgun and blasts the target to bits.

However, we’d all be wrong according to director William Castle and his writer Robert E Kent. It was the Springfield rifle.

Gary Cooper had already shown us the vital importance of this weapon in the Civil War in 1952 when he starred in Warners’ Springfield Rifle. And indeed, the muzzle-loaded .58 caliber rifle was churned out in vast numbers by the government armory in Springfield, Massachusetts and it was the mainstay of Union forces throughout the conflict. But after the war the gun was converted to a breechloader, with a ‘trap door’ mechanism, and in this form the Springfield was standard issue for the Army during the Indian wars of the 1870s and 80s. It was reliable, cheap to make and reasonably accurate – though of course still a single-shot weapon. The Gun that Won the West, though, invents a super-Springfield, one that can fire thirty rounds in two minutes and has more muzzle power and is generally a gun that will annihilate the Indian  to the benefit of the superior white man. The plot device is, though, that it will take time to deliver these secret weapons to the frontier. Can they be got there before Red Cloud and his Sioux wipe out the US Cavalry? 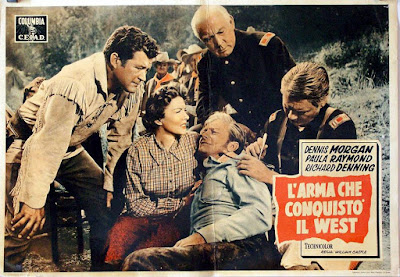 We open with a Wild West show, that of (fictional) Dakota Jack Gaines, former Indian scout and very Buffalo Billish. Dakota Jack, though, isn’t actually. Richard Denning (blond) is Dakota Jack and Dennis Morgan (dark) is Jim. I refer to their hair color because I have this theory that blond men can’t be goodies in Westerns, or very rarely anyway, and when they try (see Alan Ladd) they aren’t very good at it. Mr Denning (Louis Albert Heindrich Denninger Jr) was really better known in the 50s for sci-fi pictures but he did eleven feature Westerns, from Wells Fargo in 1937 to Buckskin Lady twenty years later. He even led in one, a Roger Corman pic in ’56. I don’t think he was passionate about acting. He said, “I’m very grateful for a career that wasn’t spectacular, but always made a good living or filled in ‘in-between’. I have wonderful memories of it, but I don’t really miss it.” 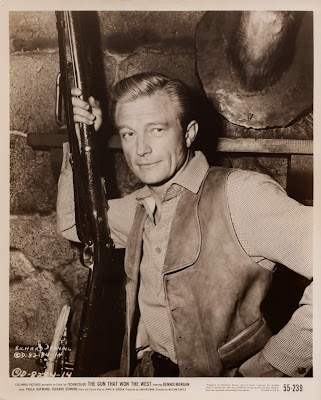 Can’t be the hero. Blond.

As for Dennis Morgan, this was the last of only six oaters he did (depending on your definition), all of which he’d led in, though. He’d been Cole Younger in Bad Men of Missouri in 1941. He was OK in our noble genre, I guess. Of course he joined a long line of actors who played Jim Bridger, starting (as far as I know) with the unknown star of Jim Bridger’s Indian Bride in 1910 and including Tully Marshall in The Covered Wagon, Nelson McDowell in the 1928 Kit Carson and Raymond Hatton in the 1940 one, Van Heflin in Tomahawk and Porter Hall in Pony Express, and I bet this list isn’t exhaustive. Bridger was of course a colorful figure, ripe for Hollywoodization. He’s definitely the hero of this one. 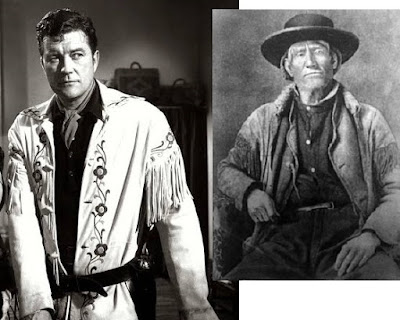 Morgan as Bridger. Actually, Bridger was elderly by the time of the Red Cloud War and was soon discharged, suffering from goiter, arthritis, rheumatism and other health problems

The trouble with Dakota Jack being drunk behind the scenes while Jim Bridger is taking his role in the show is that two senior Army officers (Howard Negley and our old pal Kenneth MacDonald) have come to recruit them for a vital mission, and naturally they mistake one for the other. Jim can’t admit that his pard is a useless drunk. You see, the Army wants to build a series of forts along the Bozeman Trail to the gold fields of Montana, through the heart of  Indian territory, risking war with Red Cloud’s Sioux (how right they were). So we are in 1866 then. War Secretary Edwin Stanton (Richard H Cutting) charges Jim (Dakota Jack still being indisposed) with holding the  got out to Wyoming and finally settle the matter. Of course Jim agrees, patriotically, though Dakota Jack when he finds out is very curmudgeonly about it. He has had enough of the dangerous frontier and just wants to lose himself in his bottle.

Jack’s wife persuades him, though. She is the long-suffering Max, played by second-billed Paula Raymond (the lawyer Orrie Masters in Devil’s Doorway). She seems to prefer Jim, though he is very decent (she’s his friend’s wife after all) and resists. The trio go out West in an Army ambulance driven by cheery Sergeant Carnahan (Chris O’Brien, this and The Silver Star the same year his only Westerns). 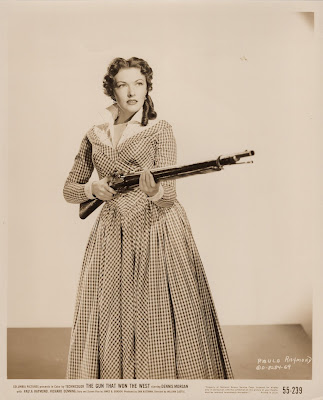 They arrive at Fort Laramie (Fort Kanab movie fort in Utah, of course) and meet the beleaguered Col. Carrington (Roy Gordon, 29 Westerns 1940 to 1959) He has only 500 men against 8000 braves. Still, they persuade Red Cloud to come in for a pow-wow. Robert Bice is Red Cloud. As with Jim Bridger, so there have been made celluloid Red Clouds, Len Haynes and Chief Big Tree in the silent days, then Chief White Eagle, John War Eagle (twice), Morris Ankrum and Eduard Franz (obviously), Frank De Kova, Eddie Little Sky and Jay Silverheels, this last adding the role to all the other famous chiefs he played (Geronimo, Satanta, Tecumseh et al). No shortage of movie Red Clouds. This one is wise and statesmanlike, as per usual, having to deal with a firebrand who wants war with the palefaces in the shape of Afraid of Horses (Michael Morgan, in his only feature Western). This was a standard plot device. 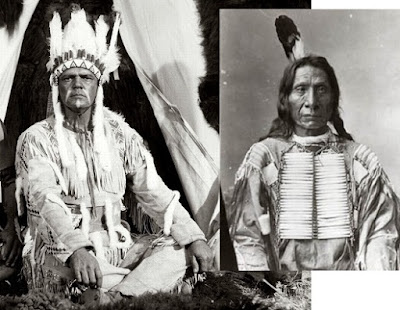 Bice as Red Cloud. The photo of the real Red Cloud was taken in 1880, but he was actually in his 40s at the time this movie is set.

Dakota Jack makes a mess of the negotiations because he is drunk again, blurting out about   taking Jim along but not Jack (confined to quarters). Max elects to go too, in a very unlikely plot development (“Women will be needed for mending and cooking,” she argues). There is a fight in which Jim is heroic. He has a brilliant plan, with which the obedient colonel falls in r go back to Ft Laramie but in reality to set up a hidden camp (not quite sure why). Supplies are l   bright.

Meanwhile, Dakota Jack has sobered up and become a goody. He persuades the Army to let him go with one of the new rifles to Red Cloud and show him. The chief will be so impressed with the power of the gun that he will immediately give up. So Jack bravely rides alone to Red  i eliminating his pursuers, though desperately wounded, and he gets back to the fort to warn that Red Cloud is now on the warpath. Such heroism. Amazing, for a blond. 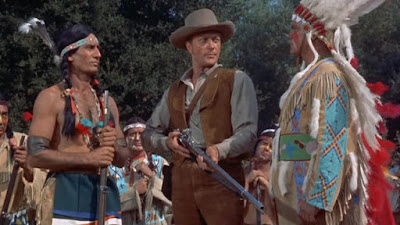 Will that gun deter the Sioux?

It all builds up to a military climax. The new guns are coming but will they get there in time?  outnumbered whites, but the US Cavalry (+ new rifles) arrives at the last moment, Jim and Afraid have a 1:1 dénouement in the water, and it’s a happy-ever-after ending as Jack, now back in favor with Max, goes off to found a new ranch, and Jim and the sergeant agree that it’s sure “a land for the future”.

Corny? Yeah, OK, a bit. But it’s all quite well done. It was shot in nice Technicolor by talented Henry Freulich in some attractive Utah locations. The director was William Castle, later a producer (notably of Rosemary’s Baby) but director of 56 movies, 12 of which were Westerns. It was produced by our old pal Sam Katzmann, low-budget minor-studio movie-meister who also occasionally did slightly bigger pictures for Columbia (one of them, Utah Blaine, with Rory Calhoun, himself also a producer, worked on 29 feature Westerns, writing often for George Montgomery (he also wrote Utah Blaine). This team knew what it was doing and while no one would probably accuse them of making great art, together they could certainly manage an actionful oater. Brian Garfield said of it, “As entertainment it’s every bit as useful as a sleeping pill” but I think that’s a bit harsh. I thought it was quite fun.