Despite its big budget and the ballyhoo that attended it, HBO’s series Westworld is very disappointing.

I was looking forward to it. I quite enjoyed the 1973 movie. It was mildly amusing, and Yul was good strutting about in his Magnificent Seven costume. So I signed up for a Netflix-style subscription of some channel or other and watched it. 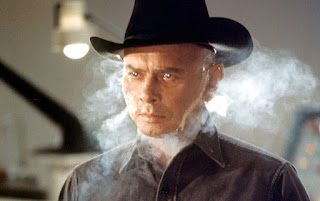 It became a chore. In the end I was only watching more episodes in order to say I’d seen it all and be able to review it. When I found that the TV channel stopped at S3 E3, bizarrely, I was relieved. I didn’t have to sit through any more.

By then (Season 3) it had anyway left the Wild West way behind. It was set somewhere in the far East (I think) and had nothing to do with the Westworld theme park. Actually, S3 was better TV, though of course worse as a Western. 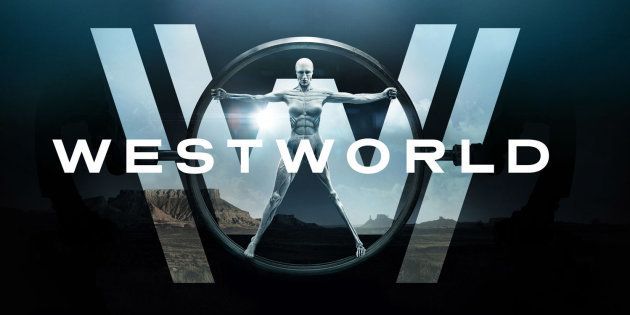 S1 did have something moderately interesting to say, in a very limited way, about the nature of consciousness. As robots, or humanoids (the series calls them ‘hosts’ at the park) become ever-more sophisticated and lifelike, it becomes harder to distinguish them from homo (not very) sapiens. When is a human not a human? Sounds like a bad joke. We can already make what we consider now as ultra-smart artificial limbs and replacement body parts – though it won’t be many years before others regard these as laughably crude – and AI is developing apace. How long will it be before we can ‘make people’, flesh-and-blood robots, and program them to do our bidding? And the whole question of when/if these ‘machines’ cross the line and become humans themselves becomes that much more germane.

In Westworld, tweaks to the hosts’ electronic brains to make them more lifelike cause that leap, like some divine or chance spark that generates true consciousness. The hosts become aware, rebel and want to take over.

But this debate is never really explored properly and is soon lost in the sensational, and often gruesome depiction of the revolt (Westworld is a rather repellent place where very rich guests can indulge their sexual and violent fantasies, and the robots are then just repaired and made ready for the next guests).

The worst aspect of the series, and the main reason why I wouldn’t watch any more even if they do put it on, is that the acting is absolutely dreadful. Worst of all is the lead, Evan Rachel Wood as Dolores Abernathy. She comes from that awful modern school of acting that thinks that if you don’t say your lines but instead whisper them really loudly, it will seem much more sincere and portentous, whereas of course it is just stupid and annoying. Unfortunately, her approach seems more infectious than Covid 19 because the other actors start doing it too. I suppose she had the excuse of being a robot. 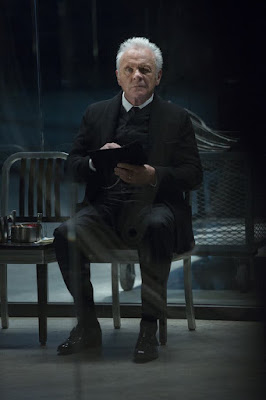 There are two old stagers who resist this daft approach, being too long in the tooth, I reckon, to fall for such silly fads. They are Ed Harris and Anthony Hopkins. The latter is unsuited to Westerns but he’s quite good as the sinister mastermind behind the project. He will perish at the end of Season 1 but it doesn’t matter; he wasn’t out of work. No one really dies in this show. They can all be brought back. Unfortunately.

Mr Harris is the nearest we get to a proper Western actor. He has the Yul man-in-black part, and he is appropriately tough and craggy. He was the best thing about the series. I was never quite sure who he was, though, human or robot. He seemed to inhabit both worlds. 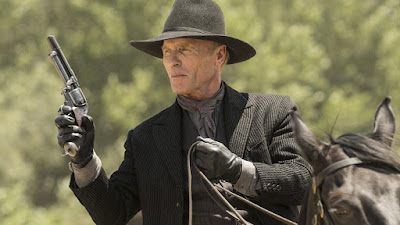 Another enjoyable aspect of Westworld (I am really searching around for positives here, perhaps to justify all that otherwise wasted viewing time) is that some of the Utah locations are stunning, and the photography (Paul Cameron seems to be credited as DP) very good on the wide-screen TVs we all have these days.

It’s a big show for special effects, as you might imagine, and some of them are pretty impressive, though you can easily have too much of that these days.

As for the ‘plot’, there is way too much déjà vu. You get to the point where you’ve déjà vu that déjà vu and really don’t want to vu it yet again. Ever. Repetitive isn’t the word for it. Not good, dudes. I suppose it’s meant to emphasize the senseless monotony of the hosts’ lives, but the trouble is that showing a lot of senseless monotony risks making an episode senselessly monotonous.

I enjoyed some of the (unWestern) music, such as the orchestral variations on Paint It Black and House of the Rising Sun (my generation).

Just as, rather annoyingly, at the end of the 70s movie they strayed into Romanworld or wherever it was, which kinda spoiled it (a scene amusingly parodied by Mel Brooks in Blazing Saddles), so too in this one they occasionally drift off into different theme parks. One episode seemed to take place in Rajworld, for no apparent reason, then come back. But overall, there was not enough ‘West’ at all, and because of the endless déjà vu we got fed up with what there was. At one point in Season 2 Bernard (Jeffrey Wright, another whisperer), whom we thought to be one of the park’s creators but who turns out to be a machine himself, says, “I think we’ve been here before.” It took you long enough, Bernard. We’ve been here before many times. 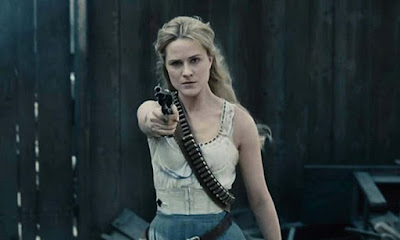 S2E8 was so boring that I nearly stopped there.

The Wikipedia entry on the series says, “The series has received largely positive reviews from critics, with particular praise having been given for its visuals, story, and acting.” Incredible. It really isn’t very good. I’m sorry to be down on it; many people doubtless invested money and energy into it and wanted it to be memorable. But it’s badly let down by the writing and acting. The writers and most of the cast really ought to consider a change of profession. Accountancy, maybe.