On June 20 INSP (for Europeans who don’t know, a Hallmarkish Conservative TV channel) will screen a new Western, The Warrant.
.
. 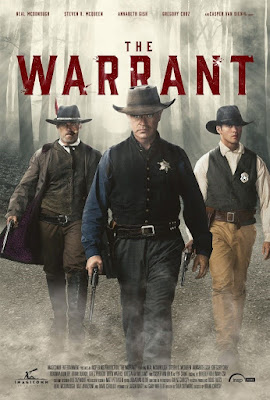 Its greatest strength is the cast-list-topping Neal McDonough, whom you will certainly recognize and who, for me, is the creepy Quarles in Justified. He’s good as Sheriff John Breaker, the ex Union soldier turned Missouri lawman, tough, almost shaven headed, a man who takes no you-know-what from anyone.

He has a son, Cal, who was with him in the war in ’64, who has now (fast forward to 1869, though several characters have 1870s firearms) become a US marshal, and this Marshal Breaker (Steven R McQueen, grandson of the Steve McQueen) has a warrant for the arrest of a murderous bandit known (ironically) as The Saint. The Saint (Casper Van Dien, Johnny Rico in Starship Troopers who also starred in the 2008 TV Western Aces ‘n’ Eights) was another a brother-in-arms back in the war, but he was a bad egg. Breaker père should have hanged him as a murderer and deserter but let him go. Mistake. 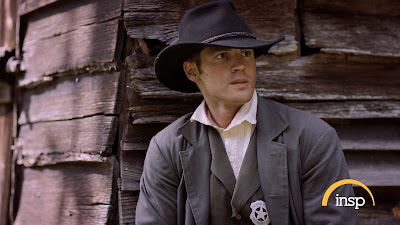 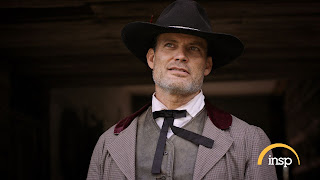 and the bad guy (both wearing their costumes)

The marshal swears in his own dad and, along with a deputy marshal (Greg Perrow) and Sheriff Breaker’s loyal sidekick (yet another fellow soldier) Bugle (Gregory Cruz, probably the best actor on the set), they set off to arrest the villain. Mrs. Breaker (Annabeth Gish, don’t know if her surname indicates membership of Lillian’s family) doesn’t care for the trip at all but her husband tells her that a man’s gotta do what a man’s gotta do – or almost: he says “I have to do this”. 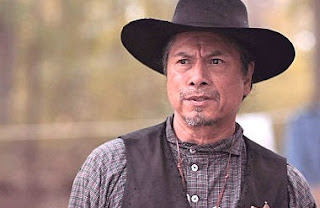 We are carefully introduced to The Saint’s gang, one by one, by seeing their WANTED posters. They are McCready, an African-American with a guitar (Gregory Alan Williams), York, a sniper with a long-range rifle and telescopic scope who “never misses” (Isaiah Stratton), Anvil, a huge strongman who favors brass knuckles (Esteban Cueto), George Washington Jr (Trace Cheramie) who claims to be a descendant of the George Washington but isn’t, and a girl with very modern diction, Stacey Snyder (Roxanna Dunlop). I may have missed one.

The director/cinematographer is Brent Christy (above), working on his sixth Western. It’s a pretty picture, with very pleasant green locations (I don’t know where it was shot) but I would say Mr Christy does better as a photographer than as a director. The pacing is a bit odd. We get too many flashbacks and flash forwards. I know they are expected these days but I think these were overdone. The lawmen don’t set out on their quest till 38 minutes in, so that was rather long setting the scene, and they find their quarry very easily: a shoot-out at a cabin where the gang is holed up happens quite soon. There are also some rather corny bits, such as the villain discovering his gun is empty and throwing it away – why do they do that?

Still, it’s generally reasonably well done, and the cast is (just) strong enough to carry you along and not lose patience.

Costume designer Lile Sizemore made an effort to make the clothes authentic (more so than the guns) though it’s another of those movies in which the actors are all too evidently wearing costumes. 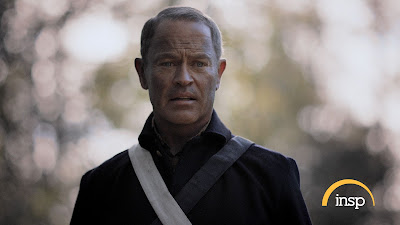 The writer was Shea Sizemore, which is probably not a coincidence. The script is conventional, I would say, occasionally teetering dangerously on the brink of cliché, and in the final
scenes, on the brink of heart-warming cheese, but just about managing not to fall over.

Standard fare, I reckon, but I’ve definitely seen worse. If you get INSP you could watch it. 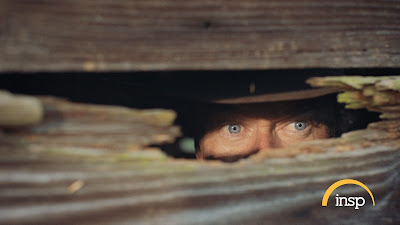