Fonda still had it 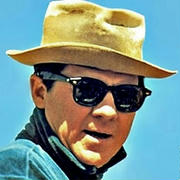 Burt Kennedy (above) had two Westerns he directed released in May 1967, The War Wagon  with John Wayne, at Universal, and a smaller picture but also with a great Western star, Welcome to Hard Times at MGM.

Curiously, Burt hardly mentions Hard Times in his memoir Hollywood Trail Boss, devoting more lines to the Wayne picture, perhaps because The War Wagon was quite well received by the critics (Variety positively enthused) and it did OK at the box-office, grossing $6m, while Hard Times sank without trace. Variety talked of its “lack of depth and perception in script and direction”, and The New York Times said, “It’s listless, haphazard, and there isn’t a single person in it with whom you’re made to identify”, adding, “Hard Times is the name of the hamlet, in case you haven’t guessed. It is also the name of what this picture gives the audience.” Ouch. The picture got nowhere in the box-office rankings. Well, Burt, you can’t win ‘em all.

Actually, I don’t mind it. Henry Fonda was so good, even in his later Westerns, some of which were dubious. There is quite a Firecreek vibe to it, in fact, with Fonda taking the James Stewart part of a decent man in a one-horse town obliged to take on professional badmen way above his paygrade (Fonda was of course said pro badman in Firecreek). 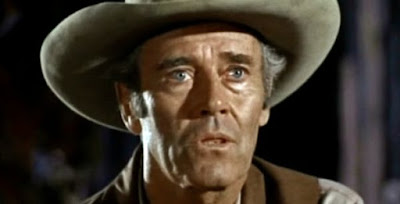 Visually, Hard Times is fine, with Harry Stradling Jr Metrocolor photography of Jass Conejo Ranch, Thousand Oaks, Cal. locations. The ‘town’, Hard Times, is a tiny entirely isolated collection of rude buildings that reminds one a little of the town in Shane, and in fact there are a couple of references to Shane in the movie, such as the little boy looking goggle-eyed under the batwing doors at the violence in the saloon, and the death of Elisha Cook Jr, shot by the ruthless gunslinger and falling flat on his back in the mud street.

Elisha makes use of his own hearse

Cook, as the undertaker (soon bundled into his own hearse) is just one of a veritable Who’s Who of (aging) Western character actors who grace the picture. We get Denver Pyle as a rambunctious stage-driver, Royal Dano as a mysterious (and entirely silent) Indian medicine  John Anderson in a double part as the storekeeper and his brother, Warren Oates as the drifting gunman who becomes sheriff, Lon Chaney Jr as the barman, Paul Fix as an apoplectic former  uniform), and, best of all – though it is only a two-minute cameo – Edgar Buchanan, in his last ever Western, stealing the show as a clerk sent out from the territorial capital to register the settlement as an official town. It’s a great line-up. 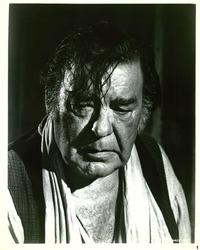 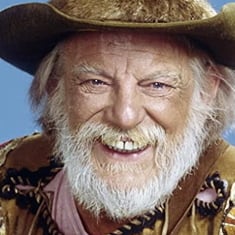 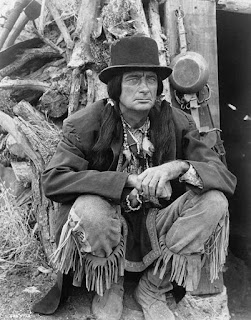 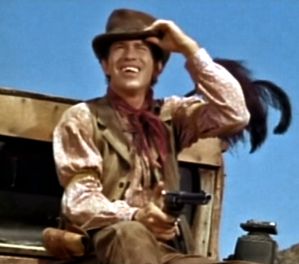 The unnamed thug, the ‘Man from Bodie’, who descends on the village and terrorizes it, raping and killing a saloon girl, stealing the undertaker’s horse and shooting dead its owner, then setting the buildings ablaze before galloping drunkenly off, is played by Aldo Ray, Davie in Pat and Mike and Albert in We’re No Angels, in his first Western (he eschewed the genre, generally). He’s terrific, smashing the necks off bottles to save time opening them, and filling the town with his crazed, homicidal laughter. I suppose he had the right to overact; it was part of the role.

I was also impressed with the acting of the young boy, Jimmy, Paul Birch’s son, played by Michael Shea, who would be Huck Finn on TV the following year. Orphaned, Jimmy is adopted by the ‘mayor’ (they call him that anyway) – Fonda – and one of the saloon gals whom Aldo nearly killed, Molly (Janice Rule), a woman Fonda has also kind of adopted as his wife, though she is scathing about him. The teenage lad is authentically resentful, angry and truculent. He thinks his new dad is a coward because he didn’t use a gun to confront the maniac, and his new mom encourages him in that belief. In fact, in a reworking of the ‘wicked stepmother’ syndrome, she suborns the boy, training him to become her defender despite his youth. It’s a highly dysfunctional family unit. 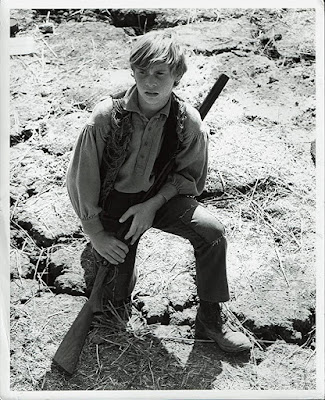 Orphaned and adopted, but into a far from happy family

The music, by Harry Sukman, is discordantly dark and somber, in a contemporary classical way.

After the devastation wrought by the Man from Bodie, the place seems to be dying. The storekeeper leaves, the saloon man is dead, the buildings are blackened ruins, and the stage driver threatens not to return to such a useless place. Molly says, “No child has ever been born in this town and none ever will be.” But the ‘mayor’ won’t leave. “We got a well and a cemetery. That’s a beginning,” he rather unoptimistically opines. 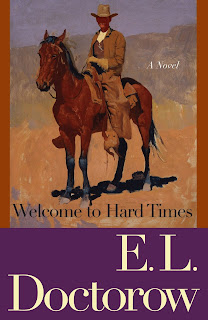 A wagon arrives. It’s a fellow named Zar (Keenan Wynn, Wes Fletcher in The War Wagon) who is a whore man. He has a wife, Adah (Janis Paige) and three saloon ladies with him (Fay Spain, Arlene Golonka, Kalen Liu). He sets up shop in a tent formerly used as a revival meeting venue and therefore daubed with JESUS SAVES and other slogans, and Zar rather sacrilegiously uses the altar as his bar. There’s a mine nearby and every weekend the miners come into Hard Times for a good time. Zar makes a great deal of money out of them, and now the place has another thriving business. The storekeeper’s brother (Anderson again) arrives on the stage, and on learning that his twin has gone, decides to stay and re-open the store. Then drifter Warren Oates happens along, finds the undertaker’s wagon (“I thought it belonged to a circus”) and is pressed into service as replacement mortician. The town is starting to grow again. 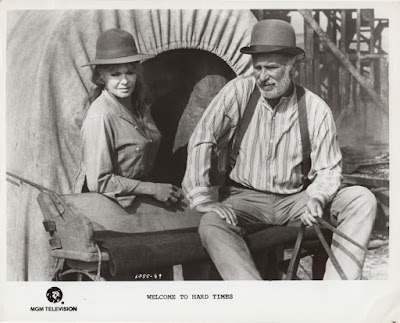 He isn’t a very nice man

But looming over all is the specter of the Man from Bodie. Will he return? They are all increasingly convinced that he will.

The Christmas scene in the midst of a bitter and seemingly interminable winter is actually quite touching, in a sad way.

Come spring, both Adah and the mayor take (separate) baths in the water trough. Naturally Fonda keeps his hat on. Warren Oates gives the boy a shooting lesson. So there’s no shortage of standard Western scenes. 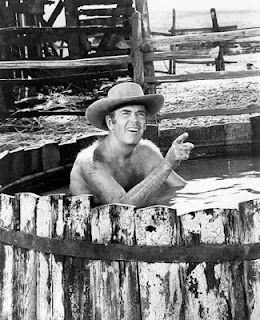 Well, Aldo Ray does come back. There will be a final showdown. Is the mayor really a coward or will he get tough when the going does? Will the town die as so many of its denizens have? You’ll have to watch it to find out, for from Jeff of spoilers shall there be none (well, some occasionally but none today).

The movie was, according to its trailer, “suggested for mature audiences.” In many ways it’s a role-reversal Western. It is the woman (Molly) who thirsts for vengeance, the hero is no gunman, there is no ‘good’ woman, only prostitutes, the ‘family’ isn’t one at all, and the drifter with a gun (Oates) proves to be a good marksman shooting at tin cans but useless when push comes to shove in a Western situation. 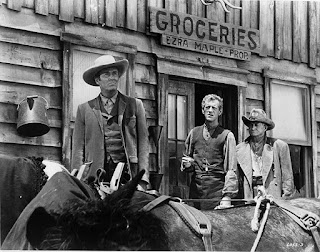 Kennedy himself called the picture, “a dark, dreary kind of thing”. Brian Garfield  said, “Marvelous cast is wasted in this boring dud. It’s molasses-slow.” Certainly the film gives us a particularly bleak picture of the West.

But myself, I don’t think it’s as bad as critics, the theater-going public and Kennedy himself thought. 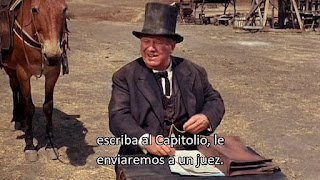 He was only in it for two minutes but he stole the show
PrevPreviousThe Tall Men (Fox, 1955)
NextThe Warrant (INSP/Imagicomm, 2020)Next