Buy your own Western town

Be a crooked saloon owner or mayor – for real

The Guardian in Britain reports that a Wild West town is for sale if you want it, and a snip at only $11.6m. The only slight snag is that it’s in New Zealand.

Mellonsfolly Ranch, established 2006, is said to be “a meticulous reproduction of an 1860s Wyoming frontier town”, though it looks dangerously close to a cheesy toytown in the photo. You might have to dirty it up a bit. 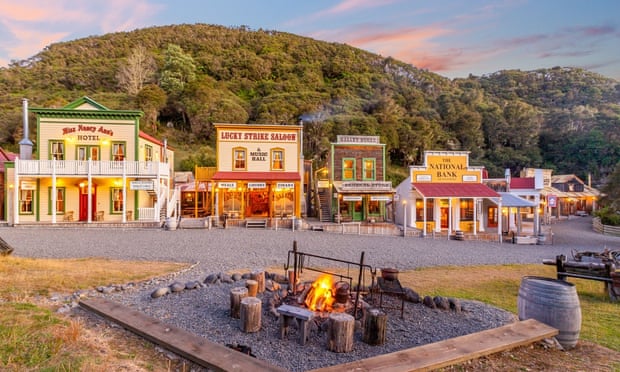 The 10-building vaguely Old West-style “Main Street” is in the North Island’s Central Plateau area, better known for its ski slopes, and features the Lucky Strike saloon, a courthouse in which you could install a hanging judge (though it might be tricky to carry out the sentence in New Zealand), a bank you could rob, a sheriff’s office, and accommodation for 22 people.

But the new town boss might not only be drawn by a love of all things Western: purchasing the property would allow an owner from abroad to get round a ban on foreigners buying homes in the country.

That’s because it is also a business – it is rented out for accommodation and functions, and features a 450-hive manuka honey business – and constitutes more than a $10m investment in New Zealand. So it’d be a question of Howdy, pardner.

But you won’t be able to visit the place in person before purchasing it: due to strict border controls, only New Zealanders, their families, and certain essential workers are allowed to enter the country.

The property is currently owned by a local auto parts manufacturer, who bought it in 2012 from a friend in a handshake deal.

Interest in the ‘town’ has apparently come mostly from the United States and Hong Kong.

So there you go. You could be one of those ruthless types that owns the whole town. Or appoint yourself marshal.