Hearts of the West belongs to that little sub-genre of movies which are not so much Westerns as about Westerns. Sunset was another, and there were many other non-Western mid-70s pictures about pictures, movies such as Inserts, Valentino, Nickelodeon, Silent Movie, and so on. Hearts is actually rather charming, as tales of naïve tenderfoots out West often are.

It’s hard to remember sometimes that the grizzled old Rooster Cogburn of the Coen brothers’ True Grit (2010) started Westerns as a youthful greenhorn in the 1970s, with Bad Company (1972), Rancho Deluxe (March 1975) and this picture (October ’75). But he did a fine job as the young Iowa farm-boy, would-be writer of Western novels, out West to acquire local color.

Lewis Tater (Bridges), who with a name like tater should probably have come from Idaho rather than Iowa, writes, thinks and breathes Western purple prose modeled on that of his great hero Zane Grey (he wants the barber to cut his hair like Grey’s). Hell, he even talks like that.

Despite his father’s skepticism (his dad is called Pa Tater) Lewis signs up for a correspondence
course in creative writing offered by a university out in Nevada, but decides he will not only correspond by mail but will go out there to study. It turns out that the ‘university’ is a PO box, a scam run by two con-men (Richard B Shull, as ‘Stout Crook’ and, as ‘Lean Crook’, the cadaverous Anthony James, Skinny the brothelmeister in Unforgiven). They are a kind of Depression-era Duke and Dauphin from Huckleberry Finn. 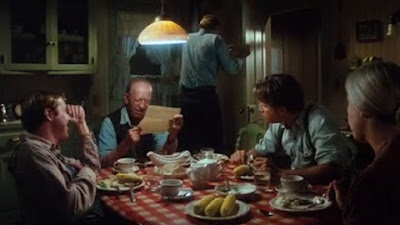 These two treat Lewis as a rube (they aren’t far wrong) and try to rob him but he escapes, taking a box with a gun in it, a box which, he later discovers, also contains all the cash and checks they have criminally amassed. They follow him, to get both revenge and their loot
back, and much of the movie is a pursuit tale (a common Western plot, as you
know). 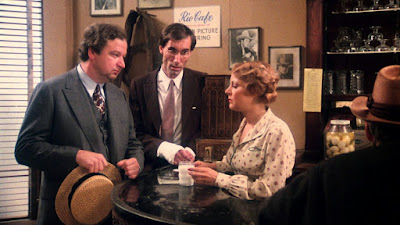 The crooks are after him

Lewis turns out to be a guileless innocent and a dreamer but also gutsy and no mug, and there’s a sort of sub-Capra aspect to him; he’s part of “the American populist hero tradition”, as the reviewer in The Los Angeles Free Press put it.

We are in the early 1930s, the era of Poverty Row programmer oaters churned out as fodder for the mid-West masses on rapid schedules and shoestring budgets. In his escape Lewis runs across such a crew, from ‘Tumbleweed Productions’, making a cheapie Western and falls in with the hard-bitten stuntmen and extras, who take a shine to this green but enthusiastic youngster.

Thold guys are really well portrayed, and the writer clearly had knowledge of and fondness for the early motion-picture business. Said typewriter-basher was Rob Thompson, later to
become a TV director and producer, here, though, in his only ‘Western’. 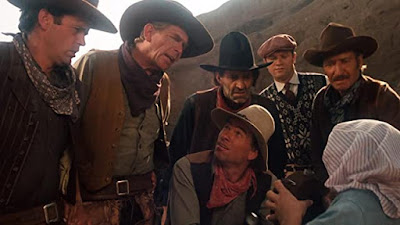 The tough old extras and stuntmen know the score

The director was Howard Zieff, former adman, known for the likes of My Girl and The Main Event but not at all for Westerns, either on the big or small screen. He helmed the picture at an amiable shuffle rather than a racy gallop, in fact at a pace that would have horrified the makers of those 55-minute second-feature Westerns, concentrating on the situational humor and the idea of the blundering bull who nevertheless somehow manages to leave the china shop with the prize piece, the girl. Actually, all the characters have saving graces, and even the two conmen apologize after they have shot Lewis. 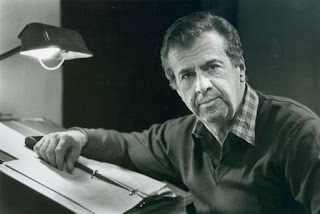 There are some nice cameos. Dub Taylor is the surly ticket collector at the Nevada station and Marie Windsor had a brief part as ‘Woman’. A less nice cameo was one by that dreadful ham Donald Pleasence, third-billed despite only being on-screen for two minutes (mind, he put twenty minutes of acting into those two) as movie mogul AJ Nietz. This part was clearly a homage to, or at least a reference to Alan James (real name Alvin J Neitz), who wrote, directed or edited 82 feature Westerns between 1917 and 1951, many of them featuring Ken Maynard or Hoot Gibson.

The love interest is provided by Blythe Danner, who the year before had been in the Burt Kennedy-directed TV movie Sidekicks, as the Tumbleweed Productions script secretary and factotum who, though a tough Tinseltown cookie, finds she has a soft spot for the ingenuous tyro. 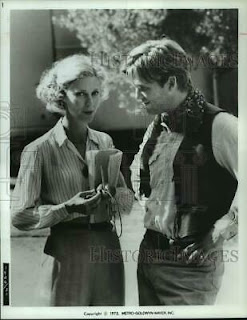 Blythe is the blonde who falls for him

Alan Arkin is entertaining as Kessler, the cheapskate producer/director of the pictures who lusts after the secretary but is getting nowhere. He would like Lewis to take over from his previous ‘star’ (Wayne Storm), who walked out, but is reluctant actually to pay him. Woodrow Parfey is also good as the distributor Gates who wants product, now, and cheap.

The honors probably go to Andy Griffith, future Matlock and folksy small-town sheriff of The Andy Griffith Show, as Howard Pike, the sad, broke-down ex-star reduced to stunting and  talkies came in) who takes poor Lewis’s novel and sells it as his own to Nietz. He will save Lewis finally in full cowboy rig, six-shooters ablazin’. 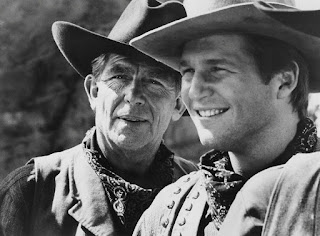 At one point Bridges observes the Western niceties by taking a bath  with his hat on. 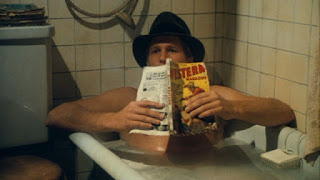 On my Spanish DVD (which bears the groanworthy title Aquel loco loco oeste, That Crazy West)  the sound was oddly uncoordinated with the picture so that the dialogue was out of synch, which was annoying.

Roger Ebert said, “The movie’s no great shakes, I suppose, but I liked it.” Vincent Canby in The New York Times called it “a benign comedy … a kind of testimonial to innocence”. Dennis Schwartz said it was an “enjoyable trifle”. The BFI Companion to the Western refers to it as “a cherishably affectionate yet unsentimental evocation of the ‘innocent’ imagination.” In fact I don’t think there’s anyone around who isn’t affectionate towards this little movie. And I’m a member of that club. Only Brian Garfieldwas less than enthusiastic, saying that “in the end the film is dissatisfying because it never decides whether to be comedy, farce or melodrama.” To me, it’s gentle satire, and an entertaining watch. 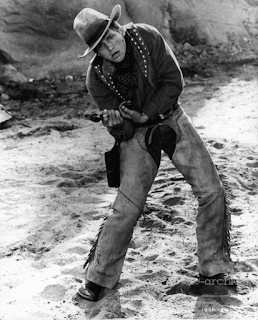 He goes the whole hog on his death scene
PrevPreviousThe Ballad of Little Jo (Polygram, 1993)
NextThe Sisters Brothers (Universal, 2018)Next