Cliff Robertson’s personal project JW Coop is one of the batch of 1970s Westerns (or semi-Westerns) which use the rodeo as a symbol of the decline of frontier values, and indeed the decay of American society more generally. We think in particular of Bogdanovich’s The Last Picture Show of the same year. 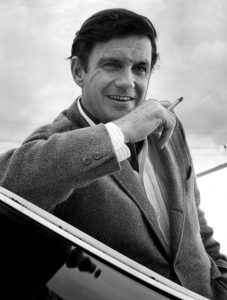 Hollywood’s fascination with the arena went right back to the early silent days – in fact one of the first ever motion pictures was Bucking Broncho in 1898. Western movies and the rodeo circuit had much in common – they are both forms of show biz have always tried to make money from idealized notions of the Old West. The late-1960s and early 70s boom in rodeo, accompanied by its professionalization and increasing commercialization, was reflected in an interest in movies about it, such as JW Coop, Stuart Millar’s When the Legends Die (1972) and Sam Peckinpah’s Junior Bonner (1972), just as an earlier flurry of interest had resulted in such pictures as Budd Boetticher’s Bronco Buster and perhaps the finest of all rodeo Westerns, Nicholas Ray’s The Lusty Men (both 1952).

JW Coop is also a member of the get-out-of-jail club of movies which feature ex-cons slightly bewildered by the world that has moved on without them, though this time the central character is not tempted to slip back into crime. In fact all he wants is to get right back to rodeo as if the last ten years inside have never happened. It opens with Coop’s release from prison, sent on his way by an appallingly breezy warden (Paul Harper). We later learn that Coop was serving a sentence for passing a dud check which a friend had said he would hold on to till there were funds for it to be cashed but who reneged on that promise, the offense exacerbated by Coop’s beating up on the tyrannical local sheriff (Richard Kennedy). The lawmen wear low-slung holsters as if they are playing cowboys, but in deadly earnest.

The hero’s name Coop can be no accident. It was the way the greatest of all screen cowboys, Gary Cooper, was commonly addressed. That Coop, the famous one, had himself been a rodeo star in The Cowboy and the Lady in 1938. Robertson, who directed, starred in, produced and co-wrote this picture, was a great lover of the Western – and, evidently, a rodeo buff. Surprisingly, perhaps, he only made two oaters, this one and, the following year, another pet project of his, The Great Northfield Minnesota Raid, a James gang picture of mixed quality which he also produced and starred in. JW Coop was a considerably superior movie, which successfully created an atmosphere at once elegiac and regretful, and painted a fairly damning picture of contemporary American life. In his debut in the director’s chair Robertson showed talent and promise. I wonder why he only directed one other picture, The Pilot, in 1980.

Released from the pen (this part shot at the McAlester State Prison in Oklahoma), JW makes use of his free bus ticket to return to his home in small-town Texas, where his widowed and clearly mentally ill mother, played by the great Geraldine Page (though here overdoing it, in my view) behaves as if he had just nipped out to the store. Actually, Page was one year younger than her ‘son’.

Right away JW notes the segregated bus, with the whites all grouped in the back seats, and it won’t be the last image of what is wrong with American society. Deep-seated racism, in particular, is shown in all its loathsome reality, and it isn’t only redneck morons who practice it routinely. Rodeo star Myrtis Dightman, the first African-American to get to the National Finals, figures as one of JW’s friends, and some louts take exception when the pair drink together in a ‘white’ bar. 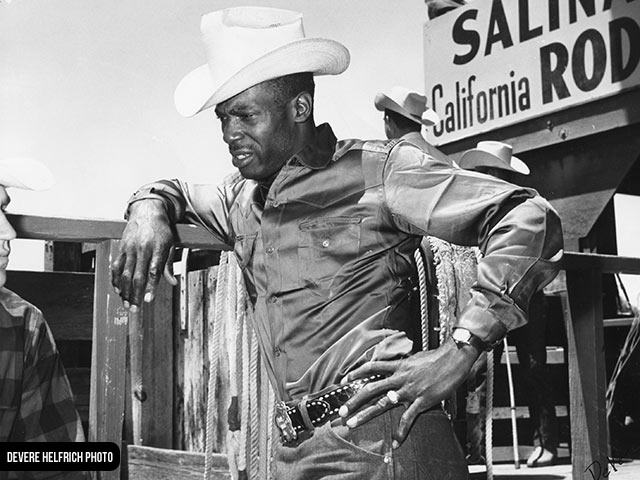 We see images of JW’s past, the dusty trumpet he used to play (and the score, by Don Randi and Louis Shelton, features mournful solo trumpet, though often the action pans out in complete silence) and the disused arena where he started his boyhood bronc riding. He also exhumes his late daddy’s 1949 Hudson (actually, I think it’s a 1951 model but hey), which smokes like a considerable number of chimneys, and he is pulled over for it by an intellectually-challenged petty fascist cop (Son Hooker). This is what prompts him to leave – there is in any case nothing but unemployment and closed-down stores in the town – and he hits the road, hitching, to get to his first rodeo since the old days.

The rides he gets, first from a hog farmer and then the driver of a big semi, are brilliant vignettes which add little to the narrative but much to the tone, as the men explain in authentically rambling, inarticulate and illogical discourse, what in their view is wrong with America today. Between rides JW meets a fellow hitcher, a hippie girl, known as Bean (because she chews soya beans for the protein), played by Cristina Ferrare. In some ways the early-70s portrayal of hippiedom is pretty clumsy but Ferrare is excellent, as she gradually ‘hippiefies’ her new consort, persuading him to grow a trendy mustache. They embrace (physically and metaphorically) each other’s free-rolling way of life, as they travel the rodeo circuit in an Army-surplus ambulance JW buys (old but strong), to which Bean gives a hippie paint job.

He meets up with old rodeo buddies who simply shrug off his ten-year absence. Among these is the great RG Armstrong, one of my favorite Western character actors, and several men who are professional rodeo artists rather than professional actors, though as I have said there is a great commonality, as great cowboy stars such as Tom Mix, Hoot Gibson, Ben Johnson and Slim Pickens have proved.

JW finds that the circuit has changed. “Rodeo’s goin’ to shit,” as one of the old boys observes. Now the big names move from meet to meet in their own private Beechcraft, get valuable sponsorship for advertizing crappy products and are mobbed by teenage girls as if they were pop stars. Yet JW goes his old-school way, and bit by bit matches the top man of the day, Billy ‘Hot Pistol’ Hawkins (Dennis Reiners), point for point and therefore dollar for dollar.

As with the other rodeo movies, the authenticity quotient is raised by intercutting footage from actual rodeos, and this gives the picture a semi-documentary feel. The bronc-riding and bulldogging scenes are real as hell and you can almost feel the bone-jarring falls and taste the dust. It’s very well done, and you can hardly tell when it’s Robertson and when his stunt-double (great editing, by Alex Beaton – who gets an in-joke mention as one of the bronc-riders announced in the arena). Robertson followed the rodeo circuit for some time in preparation for this picture, and taped many conversations. The movie benefits.

The film shows its age a bit now with all the ultra-trendy (for 1971) gimmicks, horse-mounted cameras, split-screen and such, but all in all it comes off well.

JW calls home a lot at first but then less, and the death of his mother is superbly handled, with great obliqueness. We see JW hang up, looking grim, we see him arriving back home in a taxi, we see him coming out of the little wooden Methodist church, and that’s all. Nothing is said, but we immediately understand. The picture in silhouette of JW forlornly riding a nodding-donkey in the twilight is masterly. 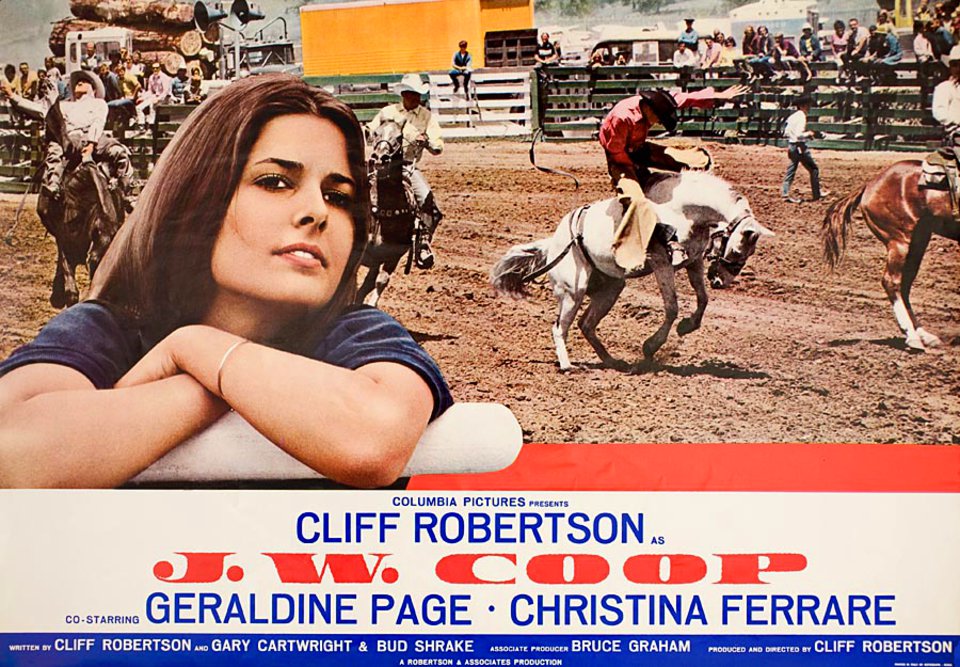 Growing success on the circuit brings its rewards and now we see JW in fancy duds and Elvis shades, taking commercial flights from venue to venue. He aspires to his own airplane but at first can only run to a beat-up ex-crop duster biplane, the aeronautic equivalent of that ’49 Hudson, which is eventually eaten by dairy cattle. It’s done with gentle though wry humor.

Finally JW proposes to bean. “A loner is a lonely man,” he explains, rather obviously, but meaning, I think, that while a cowboy prizes the solitary life (think of all those Western titles with the word lone in them) in the end he needs a mate. But Bean remains true to her hippie faith and the next morning she is gone.

The movie climaxes at the national finals in Oklahoma City. JW is only just behind Hawkins in the rankings but he explains that “second is last”. The ending is downbeat, even tragic.

Robertson’s own performance is very fine, and his writing and directing too. The movie doesn’t have all that much of a plot, and it is also slow-paced. Vincent Canby in The New York Times commented that “Robertson’s screenplay is no great shakes as narrative, but it takes a certain courage to amble as amiably as it does.” JW Coop is nevertheless one of the great films of its time (not the greatest cinematic era, I will agree) in terms of reflecting life at the time in a thought-provoking way – and that’s what great movies do. As a Western it couldn’t compete with McCabe & Mrs. Miller and Big Jake that year, and in fact it came pretty well nowhere in the box-office rankings, but it isn’t really a Western in the true sense anyway and as a document it’s more than worth a viewing, I do assure you.