The Westerns of Eli Wallach

One of the most surprising casting choices by John Sturges and Yul Brynner for The Magnificent Seven in 1960 was that of Eli Wallach to play the Mexican bandit chief Calvera. Wallach was a respected stage actor, from a Brooklyn Jewish background, and had never done a Western or anything like it. But it was a brilliant move. Wallach was superb as the charismatic bandido, and in fact if you asked most people today to name a role Eli Wallach played, they’d probably say the jefe in The Magnificent Seven. 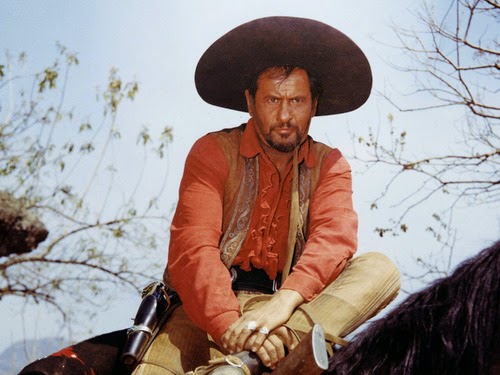 It gave the actor a taste for the genre. He obviously liked the parts. The following year he was cast (probably thanks to his friendship with Marilyn Monroe) in John Huston’s The Misfits, a bleak and harrowing modern-day Western about dysfunctional characters, played by Monroe, Wallach, Clark Gable and Montgomery Clift. It was not a huge commercial or critical success, and Huston himself regretted it, but it was in fact a superb movie, and Wallach was very fine in it. In 1962 MGM was casting its bloated star-heavy saga How the West was Won, with every known Western actor, often in inappropriate roles, shoehorned in, as well of a whole stage-team of directors, and Wallach had done enough as Calvera to be given the part of, yes, charismatic outlaw, Charlie Gant, arch-enemy of hero George Peppard, in the Henry Hathaway-directed segment. It was a lousy film, really, but very popular and a box-office hit. It certainly didn’t do Eli Wallach any harm. The same year he also did a Western TV show, an episode of NBC’s Outlaws, and this time Eli was a sheriff, who teams with Marshal Foreman and Deputy Breeson to track down badman Slim Pickens, without which success the sheriff can’t get reelected.

But Western ‘greatness’ really came in The Good, the Bad and the Ugly (Il Buono, il Brutto, il Cattivo), shot in Spain in the summer of 1966 and released in the US Christmas 1967. Sergio Leone was certainly thinking of The Magnificent Seven when he cast the role of Tuco (as all three lead characters were all bad and ugly too it wasn’t immediately apparent which role he fulfilled). In fact, Eli got top billing, even over Clint Eastwood, the star of the first two Dollars pictures, and that was quite right, actually, because Tuco is the center of the movie and Wallach’s the most colorful and roguish role. He certainly made the most of it, playing the part with mucho gusto. Unfortunately, it rather gave him the taste for spaghetti westerns, and of course he was much sought after for them. Three followed, all bad, first I quattro dell’Ave Maria, released in the US as Ace High in September ’69, a Terence Hill/Bud Spencer ‘comedy’ directed by Giuseppe Colizzi; then ¡Viva la muerte… tua!, directed by Duccio Tessari and released in the States as Don’t Turn the Other Cheek in October 1974, this one with Franco Nero and Lynn Redgrave, of all people; and finally Sergio Corbucci’s Il bianco il giallo il nero, aka Shoot First… Ask Questions Later (November 1975), with spag regulars Giuliano Gemma and Thomas Milian. It is difficult to say which was the ‘best’. Wallach didn’t seem to care about how bad they were; he was clearly enjoying himself. He was, of course, a very fine actor, winner of an Academy Award ‘For a lifetime’s worth of indelible screen characters’, but he seemed to be happy to do fun parts in pulp movies as well. Fair enough.

Between these Eurowesterns he was cast in another huge Western turkey, for Columbia this time, when he played one of the many big-name bit parts, “each of whom,” as Vincent Canby said in The New York Times, “does a sort of stagger-on and then dies”, in Mackenna’s Gold, a real dud. Eli Wallach had done enough sagebrush sagas to be included in 2003 in a History Channel documentary, and indeed to narrate it, Time Machine: When Cowboys Were King. But in all honesty, he was hardly qualified. He was superb in his first oater, and in The Misfits if you call that a Western, and he was certainly memorable for Leone, but otherwise, well, it was more a case of quantity than quality, and there wasn’t even that much quantity. Still, the actor who played Calvera deserves a mention, and if Eli Wallach is not currently residing on the Western Mount Olympus (probably somewhere up in the Rockies) he did at least win a Golden Boot award in 2001, so that’s something.