Decision at Sundown, the third of the late-1950s Randolph Scott/Budd Boetticher Westerns, a series of seven, was a little different from the first two, Seven Men from Now and The Tall T (click the links to read about those). It was not written by Burt Kennedy, it was not photographed by William Clothier or Charles Lawton and it was not shot up at Lone Pine. It was a property that Scott and producer partner Harry Joe Brown already had in a drawer and thought, perhaps because of the vengeance theme, that it would fit in the ‘cycle’ of Boetticher/Scott oaters. 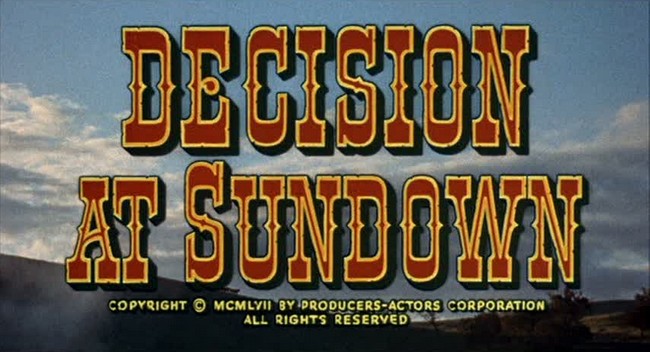 The screenplay was by Charles Lang, known as Froggy, a baseball player turned actor who changed path to write pictures in the 1950s – actually he wrote the first ever episode of Cheyenne, although Decision at Sundown and Buchanan Rides Alone (next in the same series) were his only feature Westerns as writer. He based Decision on a 1955 novel by Vernon L Fluharty, published under his pseudonym Michael Carder. Lang did a good job but he wasn’t Kennedy, and the script did not perhaps have quite the same terseness and punch. Some of the dialogue is even pretty bad – for example, the slightly Lone Ranger ending – and I am sure Kennedy would never have permitted it. Lucy: “John, we just can’t let him ride away. If it wasn’t for him…” Doc: “Yes, he changed things for everybody in town. But, unfortunately, there’s nothing we can do for him. I’ll tell you one thing, none of us will ever forget the day that Bart Allison spent in Sundown.”

Boetticher himself said that he didn’t care for this one. “It was already written, it was an old Randolph Scott picture.” Boetticher was, though, often dismissive of these pictures, which were for the most part better than he thought (or said anyway). Only Seven Men from Now did he think really good.

Some scenes were shot at Agoura, California by Burnett Guffey, who had handled the second-unit photography for John Ford in The Iron Horse (1924) and who would go on to win two Academy Awards and become President of the ASC. He had filmed The Violent Men in 1955, not perhaps Glenn Ford’s greatest Western but visually very fine. But in fact most of the action in Decision takes place in town, so we didn’t get the benefit of those wonderful Alabama Hills settings this time. The earlier pictures had had no interiors, as a budget-saving measure, but in fact it improved them. This one is, as ‘town’ Westerns often were, more claustrophobic. It is also even darker in tone than its predecessors.

The title is a punning one. Sundown is both a time and a place. Bart Allison (a classic Western name) arrives there seeking vengeance – the standard theme by now. Bart is Randy, of course. For the last three years he has been hunting Tate Kimbrough (non-Western specialist John Carroll, perhaps not quite as charismatic or charming a villain as the previous two, but certainly a worthy opponent in terms of toughness) to get revenge: Kimbrough seduced Bart’s wife and caused her death back in his home town. Sundown is slightly Hadleyville-ish, too, but this time it’s the bad man who is getting married that day. His bride to be is blonde Karen Steele, a Boetticher favorite.

When it comes to the bit in the wedding when anyone with just cause or impediment is invited to speak now or forever hold their peace (we’ve all slightly held our breath at that moment, haven’t we?) Bart does. Not only that, Trampas-like, he gives Kimbrough until sundown to get out of town, or he will kill him. We Western fans recognize such a plotline, no doubt.

In other respects too the situation is familiar to us, for Kimbrough, in a suit and frilly shirt and with a pencil mustache, has treed the town. He has a bought-and-paid-for sheriff (Andrew Duggan, who would be promoted to chief villain in a later movie in this series) and the townsfolk are pusillanimous and cringing. They have lost their self-respect.

As with all the Boetticher Westerns, the badman is quite a complex character and the moral distance between him and Scott is not so great. He has saving graces and we get the feeling that he changes as the day goes on. Bart’s stony resolve is gradually chipped away at, while Kimbrough begins to see the other side.

Randy is as usual very fine. In this one his character is less sympathetic than in the first two movies. He comes across as blinded by hatred, rather as he was in Coroner Creek in 1948 (another fine Western). There’s little to soften his character (perhaps why he has a slightly comic-relief sidekick). He doesn’t help anyone really. In later scenes he is maudlin drunk. There’s a hint that he’s suicidal. It’s another superb performance.

There’s also some strong support acting, apart from Carroll, Duggan and Steele. Noah Beery Jr is the cowpoke who accompanies Bart into town and becomes a partner. Noah is, as he always was, very good. John Archer is the doc who spurs the citizens into action, finally. Vaughn Taylor, so often the townsman, is the bald barber who gets increasingly intoxicated as the day wears on. The excellent James Westerfield is Otis, the world-weary bar tender (“Doc, when you have been tending bars as long as I have, you wouldn’t expect so much out of the human race.”). Bob Steele (no relation to Karen) appears briefly, thuggishly. Watch out for my favorite Ray Teal as a rancher who marshals the troops to resist. And Valerie French is especially good as Ruby, the good-bad woman who really loves Kimbrough – so much that she even stands by him while he is to wed another.

There’s a twist in the plot. I cannot reveal it, for fear of spoilers, though you probably know it by now, but suffice to say that the initial cause for vengeance turns out to have been… The final showdown (of course there had to be one) is unusual. I think it works. Vague echoes of Red River, maybe.

There are those who think Decision at Sundown the best of the series. I’m not one of them, though I do think it’s very good, and Boetticher showed he could direct a tense town Western just as well as an outdoors one. And Scott was rarely better.

The next in the series, Buchanan Rides Alone, was different in tone, and we’ll be looking at that shortly, so come back soon!