The Tall T was the second, after Seven Men from Now, which we reviewed recently (click the link for that) of the cycle of seven Randolph Scott Westerns that Budd Boetticher (click for an essay on him) directed in the late 1950s, and certainly one of the best – though they were all good.

Written by Burt Kennedy again (once more, click to read about Burt) photographed by Charles Lawton Jr – replacing William Clothier, who had done the first picture – once more at the iconic Lone Pine locations, and with the excellent Richard Boone as the bad guy this time, the picture had everything in place to be extremely good, and it was. 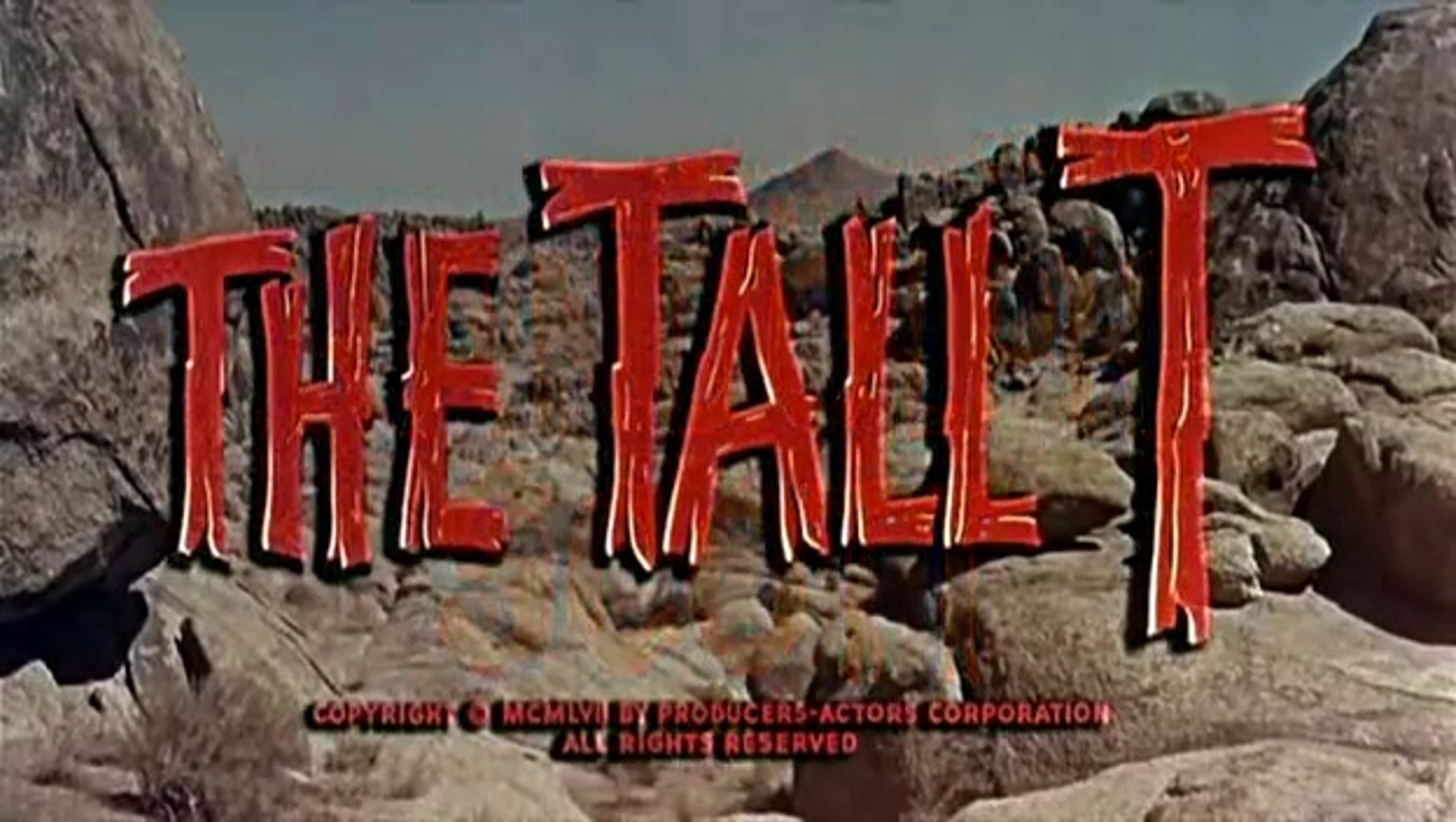 The movie was shot in July 1956, actually before the release of Seven Men, and was clearly a follow-up to it, though this time it was not a John Wayne production, and not for Warners. Harry Joe Brown produced it, with his partner Scott, and it was part of a deal with Columbia. Much as I like Seven Men, I do think that the Scott-Brown pictures for Columbia were even better.

Kennedy’s screenplay was based on a story, The Captives, by the master Elmore Leonard (first published in Argosy magazine in February 1955). Burt followed it quite closely, though the film adds occasional scenes.

Being an Elmore Leonard story, it’s is set around Contention, AZ and there is some lovely photography of fine scenery by Charles Lawton Jr, with California standing in just fine for Arizona. There were no interiors (apart from a cave), according to Burt Kennedy for budgetary reasons, but it really improves the picture. Visually, the film is splendid and the color fine. Lawton was a maestro of the camera, as he proved shortly afterwards when he shot 3:10 to Yuma for Delmer Daves in an absolutely glowing black & white. He worked a lot for Daves, and with Scott, and was one of the greats of Western cinematography. He would also shoot the last two pictures of this series, Ride Lonesome and Comanche Station.

Really, everyone in The Tall T is lonely, and the empty vistas and wide shots of riders in open landscapes accentuate that. There are some masterly directorial/photographic touches: for example when Scott learns that the outlaws have killed the stationmaster and his young son, the camera just pans, following Scott’s gaze towards the well (where we understand the bodies have been thrown) and then back to the outlaws. Nothing is said, and Scott’s stony face betrays little. It’s a very powerful moment.

Good as Lee Marvin was as the charismatic bad guy in Seven Men from Now, Richard Boone as Frank Usher in The Tall T is even better. Boone was always best as a badman in Westerns. My own personal favorite of his villainy is his Grimes in another movie based on an Elmore Leonard tale, Hombre (1967) but there are plenty of other excellent examples. Boetticher bad guys were almost appealing in some ways, and morally close to Scott’s characters. There is a certain ambivalence about them: we are almost on their side. And Scott’s stony stoicism contrasts wonderfully with their panache. Boetticher said that he felt Boone’s Usher wanted to be Scott’s Pat. I have seen these films praised for their “moral certitude” but in fact I think nothing could be further from the truth. There is huge ambivalence on both sides.

As an aside, but a Western aside you understand, I would say that the 1950s established the charming-rogue badman firmly as a character. We might think of Arthur Kennedy in Anthony Mann’s Bend of the River (1952), or Burt Lancaster in Robert Aldrich’s Vera Cruz (1954), or, contemporary with The Tall T, Glenn Ford’s masterly Ben Wade in 3:10 to Yuma (1957). There were plenty of others. Robert Preston, for example, almost specialized in the role. All these smiling badmen played off the tough-guy stoical heroes, James Stewart in Bend, Gary Cooper in Vera Cruz, Van Heflin in 3:10. The types were bad guys, yes, but you kinda sympathized with them anyway, and they had saving graces. The roles lasted, such as Kirk Douglas in The War Wagon (1967). I guess the apogee was Butch Cassidy and the Sundance Kid (1969), in which both the stars were that type. But back to The Tall T.

Boone is supported in The Tall T by two truly nasty heavies, also well played by Skip Homeier as young Billy Jack and the excellent Henry Silva as Chink. These thugs are truly frightening. Homeier had been the punk kid who gunned Gregory Peck down in the Gunfighter (1950), you will remember, and he got slightly typecast in punk-kid roles. He mostly did low-budget Westerns and TV it must be said but occasionally he was really good, as here. Need a sneering gunman? Call Skip. Silva was new to Westerns. He’d had a small part in Viva Zapata! as a peasant and had also been in a Wagon Train episode but that was it. Budd Boetticher, reported by Robert Nott in his very good book The Films of Randolph Scott, said, “Henry Silva I just loved. He came down to play the part, and he had never seen a horse up close before, and he put the wrong foot in the stirrup! But he rode fairly well, I thought.” Silva got the taste for Westerns because in 1958 he too came up against Gregory Peck, this time in The Bravados, and the same year he was a heavy in The Law and Jake Wade.

Maureen O’Sullivan (from the Tarzan pictures) is excellent as the plain woman who rather than become an old maid agrees to be married for her money to a scoundrel (John Hubbard) – not all actresses would have accepted such a role. As a scenario, ‘cowardly husband with wife who deserves better – and look, here comes Randy!’ had worked well in Seven Men. She ‘grows’ during the picture and becomes a real woman. It’s a good performance. Ms O’Sullivan didn’t really do Westerns as a rule, though she had started back in 1932 under Louis King with George O’Brien in the first version of Robber’s Roost.

Arthur Hunnicutt, how we love him, does his classic old-timer act as the stage driver Rintoon. He was one of those Western actors, like Walter Brennan and Gabby Hayes, who were always old, even when they were young.

The cast is small because these films were not huge epics. Rather, they were high-quality, low-budget, short, taut actioners (this one was shot in twelve days and is 78 minutes long) with interesting development of well-written and well-played characters.

Randolph Scott as the hero Pat Brennan is outstanding, of course. Towards the end of his career (he retired in 1960), he just got better and better. He starts as a cheery, decent rancher, ever ready with a smile, prepared to go out of his way to buy candy for a kid (actually the movie is a bit too light at the start, but that does at least give impact to the brutality to come).

But when the outlaws come and, horribly, throw the little boy’s body down the well, Scott changes. He becomes the hard man of Seven Men from Now. Even when he escapes the bandits’ clutches, he does not flee. He has to settle accounts. He does this with guile and grit. It’s a stunningly good performance.

‘The Tall T’ is presumably the name of the ranch Scott is trying to make a go of, or the ranch he visits in the early part of the film, though the name is never mentioned, either in the movie or in the short story. Some anonymous Columbia exec gave the picture the name. There’s apparently quite a discussion on Internet as to the movie’s title. I haven’t joined in.

The Heinz Roemheld score is understated and builds tension nicely.

And tension is what it’s all about. In many ways this is the ‘psychological Western’ par excellence. And it’s curious how such a concise, pared-down treatment, with such a short runtime, can seem almost at times leisurely, taking its time to develop. Certainly that’s helped by Scott’s laconic style.

The Tall T is a tough, gritty little Western which, like all the Boetticher/Kennedy pictures, deserves more fame than it has received. For a long time, even though Variety applauded it as “an unconventional Western [that] passes up most oater clichés”, it was forgotten and ignored, not available commercially. But now it is receiving some of the credit it deserves. For example, Martin Scorsese talks glowingly about it in his A Personal Journey Through American Movies. And Paul Simpson in The Rough Guide to Westerns even makes it No 10 in his list of Top Ten Westerns.

The next picture, Decision at Sundown, released later the same year, was even darker. We shall be examining that one shortly, so come back soon!