1950s Westerns at their very best

This picture started life in 1954 when Burt Kennedy, click the link to read our essay on him, pretty well down to his last dime, finally caught a break. He was hired by Wayne-Fellows to write some Westerns for Duke, who was on a ten-film contract with Warners and needed a couple more projects. Burt sat down and wrote Seven Men from Now. It took him eight weeks (he was paid for six). Wayne was lukewarm at best and Nate Edwards, the production manager, said, “It’s all right. There’s a typical shoot-out in the rocks.” The script was shelved – literally, for it was put in a closet in the coffee room where it gathered dust. Burt went off to write Gun the Man Down, a United Artists picture starring James Arness, which would released in 1956.

But then Robert Mitchum’s people started to show interest in the Seven Men screenplay, and suddenly Wayne was keener: if Bob Mitchum wanted it, it must be good. He showed it to Jack Warner who was enthusiastic. Warner thought it a gripper and suited to Duke. But by then Duke was totally involved with John Ford and The Searchers, shot in the summer of ’55 (to be released in May ’56) and so he let Seven Men go. In his memoir Kennedy says it was offered to Joel McCrea, who turned it down, then to Robert Preston, who didn’t even read it. In a late interview Budd Boetticher said that afterwards Wayne had come to him and Burt and asked who they thought should lead in it. They dutifully replied that Wayne himself should do it but they knew he wouldn’t. It was Wayne himself who suggested Randolph Scott.

So one of the best Westerns of the mid-50s was born, with Boetticher directing, Wayne producing, Kennedy writing, Scott starring (with Lee Marvin as the bad guy) and Wayne regular William H Clothier at the camera. Seven Men from Now was filmed in a 13-day shoot on a very modest budget up at Lone Pine in the fall of 1955, and finally released in August 1956. 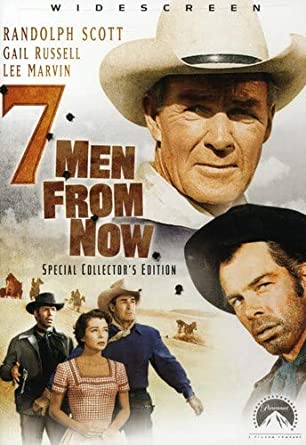 It would become the first – and one of the best – of a cycle of seven Westerns, two for Warners, the rest for Columbia, that for a long time were ignored, and not even available when VHS, then DVD became common, just shown to cognoscenti at the occasional film festival, but hugely admired by hard-core Westernistas when they did get an airing.

Seven Men, in common with the other pictures (for taken together they are a coherent body of work) was not a ‘big’ picture. Quite apart from the modest budget and limited cast, Boetticher didn’t want a large, sprawling Western, about the conquering of the West or such. These Westerns were personal dramas with a small number of interesting characters subtly portrayed by fine actors. Martin Scorsese remarked of Boetticher, ”His style was as simple as his impassive heroes – deceptively simple.” Boetticher summed up the western formula as: ”A man has a job to do, or a couple of men. They try to do it against tremendous odds. They do it.” That’s pretty succinct.

Boetticher had little interest in the true history of the West, nor, really, in Western communities. He wanted lone riders righting wrongs. Everyone in these pictures is a loner, in fact. Scott’s character is just the loneliest. With Clothier Budd used the widescreen format and the splendid wide-open Lone Pine locations to emphasize the isolation of Ben Stride (Scott) as he rode alone. Boetticher said, “The Good Lord really made this place [Lone Pine] for movies. There’s everything there. There’s sand, there’s rivers, it’s made for motion pictures. What I would do that other directors did not do, I knew every inch of Lone Pine on horseback ‘cause I went where people never went.”

Lone Pine. The whole notion of lone-ness was central to the Western, and it is no accident that the idea appeared in two titles of the seven, Buchanan Rides Alone and Ride Lonesome.

Boetticher himself thought Seven Men the best of the series – in fact in an interview later in life when he was asked to name his favorite Westerns of all time, he gave The Treasure of the Sierra Madre as No 1, then came Red River (Burt Kennedy would have agreed with that one), then The Wild Bunch. But then he put his own Seven Men from Now at No 4, above High Noon, so that showed a bit of chutzpah, then Shane and Rio Bravo. Kennedy also thought Seven Men the best. Not everyone agrees. The BFI Companion to the Western is of the opinion that it “looks a little like a rough sketch for the brilliance that would emerge in later, neater works.” But Herb Fagen in The Encyclopedia of the Western says that Seven Men is “arguably the best of the superb lot.” Well, in the last resort it’s a matter of opinion. My own favorite, for what that’s worth, is Ride Lonesome. But the best or not, Seven Men is undeniably astoundingly good.

Many Westerns of the time were made as second features, or part of a double-feature bill, which simply don’t exist anymore, and the pictures had to be short (Seven Men is 78 minutes long). At their worst, short low-budget Westerns were churned out commercially and had little merit, and less originality, but at their best – and this one is among the very best – they were little gems. Tight, concise, carefully constructed and simply shot, they were quality actioners with convincing scripts and impressive acting.

The picture starts badly with an awful song (which Boetticher and Kennedy hated, and sought unsuccessfully to have removed) over lurid titles as Scott walks over a sound stage in the ‘rain’. But immediately this first scene is tense and gripping. The iffy start is overcome in a matter of seconds and becomes brilliant. I love Kennedy’s oblique dialogue in the first reel as Stride verbally fences with two of the seven villains he has caught up with. They talk about everything except the real subject. Pinter would have been proud to write it (had Harold done Westerns).

Scott is absolutely excellent as Stride, the ramrod-stiff implacable man out for revenge. He is after the seven men who robbed a Wells Fargo office back where he was a lawman, in the process killing his wife. He has lost his love, job and status and has to live it all down. Stony, stoic, implacable but driven, he wants only revenge. Vengeance was of course a standard theme of the Western but rarely has it been done so well.

As an aside, there were seven men in the murderous gang, as the title makes clear. It’s noticeable how in Westerns there so often seven men in a gang or group. We think principally of The Magnificent Seven and its various sequels and versions, but next time you see a posse galloping after anyone across the screen, count them. Likely there’ll be seven. Perhaps it was because seven was big enough to constitute a group but small enough to fall within budget restraints. Enough to be ‘a lot’ but few enough to be individually memorable. I don’t know.

As a perfect foil, Lee Marvin as Bill Masters is brilliant as a charming, nasty, clever villain, in his flamboyance the antithesis of Stride. Boetticher and Kennedy wanted charismatic villains but they had to have saving graces. They aren’t just traditional ‘black hats’, totally evil, any more than Scott’s characters are knights in shining armor. This was a turning point in Marvin’s career. As we were saying when discussing his Westerns recently (click here for that) he had done smallish parts as bad guys quite often – including with Randy in 1953 in The Stranger Wore a Gun – and he’d been the army sergeant for Boetticher in Seminole that year too. He’d stood out for Sturges in Bad Day at Black Rock in 1955, if you call that a Western (I do), but this was his first part as principal badman. John Ford must have seen it, before taking Marvin up in ’62 as Liberty Valance.

Marvin’s henchman is Don ‘Red’ Barry. Red Ryder in the Republic serial in 1940, Barry went on to do several Westerns for the studio but his combative, angry nature made many dislike him. By the 50s he was doing low-grade pictures for Lippert and other minor studios. He got some work on Western TV shows. He descended to bit parts, even uncredited. The role in Seven Men was a step back up for him. But Boetticher didn’t like him at all. “He was very lucky to get the part,” Boetticher said.

Marvin and Barry were not part of the robber gang but they tag along because they want the loot – the $20,000 haul the gang netted. So they are ambivalent allies. Stride does not a care a hoot about the money, only the vengeance. Masters is the reverse. We know there will be a last-reel showdown.

There had to be a dame of course. Usually, Boetticher preferred blondes with a cleavage – he was a bit of an unreconstructed man’s man in that way. This time unblonde Gail Russell, who had shone for Wayne as the feisty Quaker in Republic’s Angel and the Badman in 1947, Duke’s first picture as producer, plays Annie Greer, on her way West in a wagon with a greenhorn husband (Walter Reed). Wayne was warned that Russell looked too old to play a young wife but he went ahead anyway, loyalty and helpfulness to friends and protégés being a fine trait of his. Actually, she was only 31, but an alcoholic, she looked much older. In fact she would die of alcohol-related liver failure in 1961 aged only 36.

There is, of course, a certain chemistry between Annie and Stride, her marital status notwithstanding. Masters detects this immediately and needles both endlessly. It’s very well done. Reed, a favorite character actor of John Ford’s, plays the weak Easterner hubby who learns Western grit. That’s well done too.

Of the smaller parts, I like the way Fred Sherman, who played the prospector that Randolph Scott called “old timer”, was actually seven years younger than Scott. You can also see John Larch, Fred Graham and Stuart Whitman, as well as ‘Bad’ Chuck Roberson.

Amusingly, the picture is set in Arizona but filmed in California. When it came to Buchanan Rides Alone, filming was done in Arizona while the story was set in California.The music by Henry Vars is melancholy and haunting. Like the whole film: an unpretentious, high quality little Western that for years was much underrated – but now has come into its own.

We’ll be looking at the other pictures in the cycle in the days to come (next up, The Tall T), as well as a survey of the Westerns of Randolph Scott. So keep coming back, e-pards!