We’ve been looking lately at Owen Wister’s seminal 1902 novel The Virginian, and its various ‘picturizations’, as they used to be called, the 1914 one directed by a young Cecil B DeMille, the 1923 silent remake starring Kenneth Harlan, the 1929 talkie with Gary Cooper, and the 1946 color remake with Joel McCrea. Click the links to read about those.

In our own day a TV-movie version was inevitable, and we have had two, a 2014 one with Trace Adkins (which will be our next review) and TNT’s 2000 picture, a personal project of Bill Pullman. 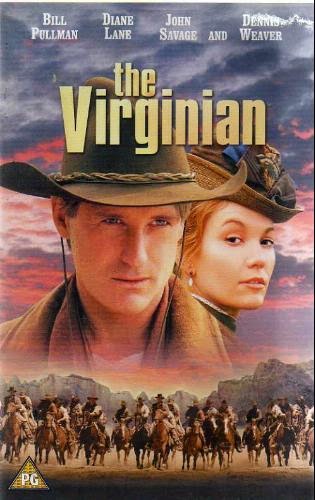 We may not expect a TV movie to be able to match the quality of big-screen versions with famous stars, but in fact the 2000 one is really rather good. I would go so far as to say it is the best version after the Gary Cooper one.

Of course TV had taken up the baton of The Virginian well before. NBC’s series starring James Drury began in 1962. But that show bore very little resemblance to Wister’s story or the 1904 play derived from it. The writers used the characters’ names and the setting, Medicine Bow, but you can’t count it as a version of The Virginian. It was renamed The Men from Shiloh at one point and that was just as well.

The TV movie aired on January 9, 2000. I say it was “a personal project of Bill Pullman” because Mr. Pullman not only starred as the Virginian, he also directed and co-produced the picture.

He was supported by a good cast: Harris Yulin (the corrupt Wyatt Earp from Doc) is the judge, infinitely more convincing than Ron Perlman in the 2014 Canadian one. Mr. Yulin gives us a believably tough 1880s Wyoming rancher, ready to turn a blind eye but basically on the side of the angels. The Pullman film elevates Sam Balaam from the novel’s minor character beaten by the Virginian for equine abuse, into the antagonist, the chief rival rancher of the judge, and a very bad egg indeed. He is well played by Dennis Weaver, who gives us snarls, bully-boy tactics and cowardice aplenty.

The Molly is Diane Lane, well-known to 1980s and 90s Westernistas for her Little Britches in the 1981 Burt Lancaster movie, her Lorena in Lonesome Dove (the 1989 mini-series and the longer TV series) and her Susannah Moore (supposedly Jack McCall’s mother and Wild Bill’s lover) in Wild Bill in 1995. She’s OK as Molly Stark (the Wood seems to have been dropped) but of course it’s fundamentally a weak part and in the book she often comes across as plain silly.

I liked John Savage as Steve. He had been Bittercreek Newcomb in Cattle Annie and Little Britches, Loney in the 1972 Jeff Bridges Western Bad Company and Slater in another Wyoming Western, HBO’s 1999 The Jack Bull. His Steve is like the one in the book, a basically decent fellow won over to the dark side by the bad guys.

Colm Feore is Trampas, surprisingly bland, I thought, though it may have been the writing (Larry Gross, who worked on Wild Bill and Geronimo: An American Legend, wrote up the screenplay from the Wister novel). Mr. Feore had a cameo General Sherman inBury My Heart at Wounded Knee, was film maker DW Griffith in And Starring Pancho Villa As Himself (also for HBO) and, later, did the Canadian independent movie Six Reasons Why, which really wasn’t very good. His Western CV isn’t that strong, though of course it’s difficult for any Western actor to have a strong Western CV these days; they make so few. So it’s hardly his fault.

One of the best features is the great Gary Farmer (Nobody in Dead Man) as fat cowpoke Buster, who drives the hack that gets into difficulty crossing the river so that the Virginian can save Molly. And, for Virginian aficionados and as a little in-joke, James Drury has a small part bringing the Virginian the insulting challenge from Trampas just before the dénouement. So all in all the cast is rather good.

This version is darker than any of the others. There is somber music under it, often a string quartet or trio, there are no comic-relief episodes (this is one of the few treatments not to include the baby-swapping scene) and the lighting and wintry Alberta scenery combine to create an atmosphere of menace. It’s well done by Mr. Pullman.

Yes, it looks like a made-for-TV movie. It’s something to do with the film stock, I’m not sure, and of course the regular fades-to-black to allow commercial breaks. But Lonesome Dove and later TV efforts like Deadwood have showed just how good TV Westerns can be and paradoxically, these days they seem to have bigger budgets than Hollywood big-screen efforts.

The lynching is done in a barn and reminds me of that photograph of Killing Jim Miller and accomplices. Perhaps it was deliberate.

Pullman in his wedding coat looks ever so slightly like Gary Cooper. Praise indeed.

This Virginian is definitely worth a watch – as I said above, the best of them all apart from the 1929 talkie. Of course it makes significant changes from the plot in the book but which version doesn’t? And anyway, the book had some weaknesses. 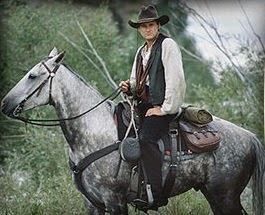