Much as I like Joel McCrea in Westerns, I have to say that his turn at being the Virginian was a bit of a disappointment. Not that Paramount’s version of 1946 was bad. It wasn’t bad. It was just rather ordinary. 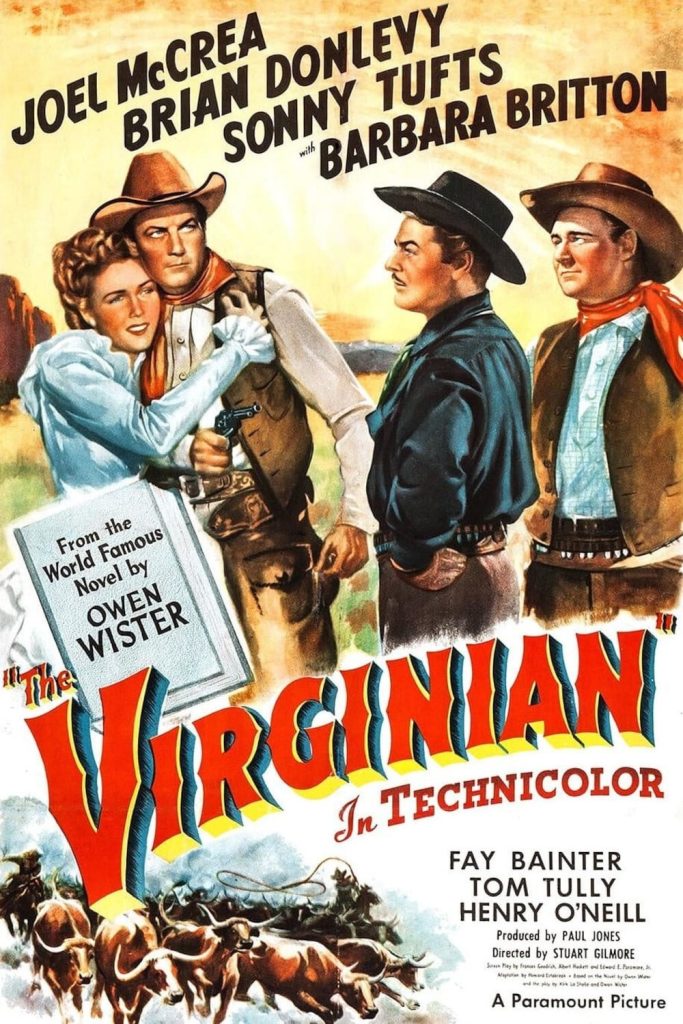 The studio rather ‘owned’ The Virginian. The first motion picture of it (click for a discussion of that) was made by Jesse L Lasky and young Cecil B DeMille, who were among the future founders of Paramount, and BP Schulberg was their publicity manager who would produce the silent remake in 1923 (click for that) and indeed the talkie in 1929 (that too). It was only natural that they’d want to do a color version in 1946. It was a natural progression. Furthermore, Westerns were ‘in’ again. John Ford over at Fox was working on My Darling Clementine, about another mythic Westerner (Wyatt Earp), David O Selznick was making his huge Duel in the Sun, and Jacques Tourneur was directing the fine Canyon Passage at Universal. And McCrea was big news. He’d starred in two big ‘nation building’ Westerns for Paramount at the end of the 30s, Wells Fargo and Union Pacific, both for DeMille (now a Paramount bigwig), and in 1944 he’d been Buffalo Bill in Fox’s big picture directed by William A Wellman.

But The Virginian’s director was no Ford, Tourneur or Wellman. Stuart Gilmore was really an editor – he’d work for John Wayne on the likes of The Alamo (hardly a recommendation, even if he was Oscar-nominated for it; that picture needed sharper editing). He only directed five pictures, two of them Tim Holt B-Westerns, a weak remake of The Half-Breed in 1952, Captive Women, a post-apocalyptic shocker the same year, and The Virginian. He had the huge advantage on life of being born in Tombstone, but it didn’t seem to help. This version of The Virginian plods.

Then there was the casting. Brian Donlevy was an interesting character who had a colorful life, but he wasn’t best suited to Westerns. He was OK as a tough-guy saloon heavy in a suit, such as in Barbary Coast or Destry Rides Again. And he was good in Canyon Passage that year as the compulsive gambler. But put him in range duds on a horse and give him a six-gun and he just looked all wrong. His Grat Dalton in When the Daltons Rode was verging on the ridiculous, and I’m afraid he was one of the worst Trampas figures of the series.

As for the other key characters, Barbara Britton was Molly. She caught the prim-and-proper nature of the schoolmarm but lacked the fire. The IMDb bio of her says, “Well-coiffed and well-dressed Barbara Britton looked like she stepped out of a magazine when she entered into our homes daily as the ‘Revlon Girl’ on 50s and 60s TV. She sparkled with the best of them and managed to capture that “perfect wife/perfect mother” image with, well, perfect poise and perfect grace.” Well, quite. On the strength of The Virginian she would do a couple of Westerns with Randolph Scott and be most notable, I suppose, as the female lead of Samuel Fuller’s I Shot Jesse James, but we can’t really put her in the top league of Western ladies.

The role of the Virginian’s pard Steve is always key in the story. Richard Arlen had been superb in the part in ’29. This time it fell to Sonny Tufts. He began in serious opera but drifted into pop music, then to supporting roles in light comedies and such. It wouldn’t be long after The Virginian that he became mired in scandal (in 1950 he was sued by two women for allegedly biting each of them in the thigh and in 1951 his wife had him jailed for drunkenness). He wasn’t the best of Steves.

The rest of the cast seem unmemorable now, apart maybe from Tom Tully as ‘Nebraska’. Even McCrea wasn’t at his best, either because he just wasn’t, or because of the script, or the direction. There’s steel in the Virginian but a twinkle in his eye. Coop caught it. McCrea didn’t.

The color is bright and there are some nice California locations, shot by Henry Hallenberger (who had worked under Vincent Milner on Union Pacific). The scene of the train arriving is well done. However, there’s too much DeMille-style back-projection and studio work.

Bosley Crowther in The New York Times of the day wrote, “The film is as formal and perfunctory as the performance of a rite” and added that “the pace is pedestrian and the actors are limited largely to talking, which is far from Western style. Except for the use of Technicolor, which adds very little, after all, since most of the film was plainly photographed on artificial sets, this might be an unboasted effort of a low-budget studio troupe.” Ouch. True, though.Variety said that the “story is a little dated as well as a mite slow” and talked of “an okay supporting cast”, adding that “the yarn is still a satisfactory romance, with enough shooting and suspense to offset the plodding pace.” So they weren’t exactly brimming with enthusiasm.

Later, Brian Garfield in his Western Films said that “The story is watered down – the humor muted, the characters simplified” and added, correctly, that “It’s been reduced to a routine oater.” 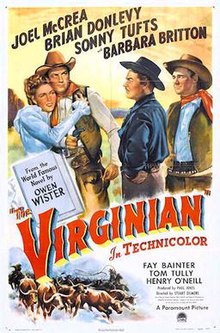