The Westerns of Yul Brynner

Though he liked strutting around in a Stetson, Yuly Borisovich Briner, or Юлий Борисович Бринер, better known to us as Yul Brynner, only did seven Westerns. You might imagine, given the huge success, in Europe anyway and then later in the US, of his first, The Magnificent Seven, now second only to The Wizard of Oz as the most-shown movie on American TV, that he would have done more. But his life was full and even exotic, and the roles he took varied (most famously as Ingrid Bergman’s mentor in Anastasia, the Pharaoh Rameses in The Ten Commandments and the King of Siam in The King and I). Musician, acrobat, writer, photographer, he was multi-talented, and always busy.

Still, he did enough Westerns – nine, depending on your definition of Western – to be considered one of the more interesting, if not prolific actors in the genre, and his Chris in The Magnificent Seven, (and one of its sequels) alone earns him an honorable mention.

Brynner was a prime mover in the project of translating Kurosawa’s The Seven Samurai to the American screen as a Western, and had a major say in casting. The whole production was plagued by squabbles and contests. Anthony Quinn was to have been a producer, and would have been a splendid Calvera, I guess. He claimed that he and Brynner had developed the concept together and had worked out many of the film’s details before the two had a falling-out. Quinn ultimately lost his claim, because there was nothing in writing. Brynner did a deal with producer Walter Mirisch. Then there were all sorts of arguments over the script and the credits for it. But the end result was utterly superb, and much of that was down to Brynner.

He had some conflicts on the set (there was much testosterone for director John Sturges to deal with), with Steve McQueen in particular, whom Brynner had specifically requested but he may have regretted that. McQueen constantly tried to upstage Brynner, who told Steve that of he didn’t stop hogging the camera he would simply take his hat off. Brynner and McQueen took shooting and quick-draw lessons from actor and gun expert Rodd Redwing, and were even competitive about that. In later years the two men reconciled. McQueen, dying of cancer, called Brynner to thank him. “What for?” queried Brynner. “You coulda had me kicked off the movie when I rattled you,” replied McQueen, “but you let me stay and that picture made me, so thanks”.

Brynner was in his element during filming. He was actually married on the set, to Doris Kleiner, five days after divorcing his first wife, and the wedding celebration used many of the same props as the movie’s fiesta scene.

Yul was the only one of the seven to agree to a sequel, when he went to Spain in 1966 to shoot Return of the Seven, directed this time by Burt Kennedy. It was a pale imitation of the original and the script was very ordinary. The characters of the other six are not so charismatic, distinct or memorable as they were the first time, nor are they developed much as the movie progresses. But Mirisch produced again, and Elmer Bernstein’s stirring theme was used. Yul had a two-gun rig, this time. Otherwise his beloved costume was the same.

Between the two Mag Seven pictures, though, in 1964, Brynner appeared in an interesting role, as Jules Gaspard d’Estaing, the titular shootist in town in the off-beat Invitation to a Gunfighter. Part of the dialogue has Jules trying to get the townsfolk to pronounce his name correctly (he’s supposed to be a Creole from New Orleans). Brynner’s family had moved from his birthplace of Vladivostok when he was child, first to China and then to Paris, where he grew up, so his French was completely natural. Jules is a gun for hire because he thinks getting paid by white folks to kill white folks helps him avenge his slave mother who had been sold when she got too annoying to her white owner. That’s already quite an unusual premise and there are other psychological twists and turns which add to the interest. He plays the spinet and guitar and knows poetry. It’s not a great Western and certainly not a famous one but it is interesting, even curious, and it repays a watch. 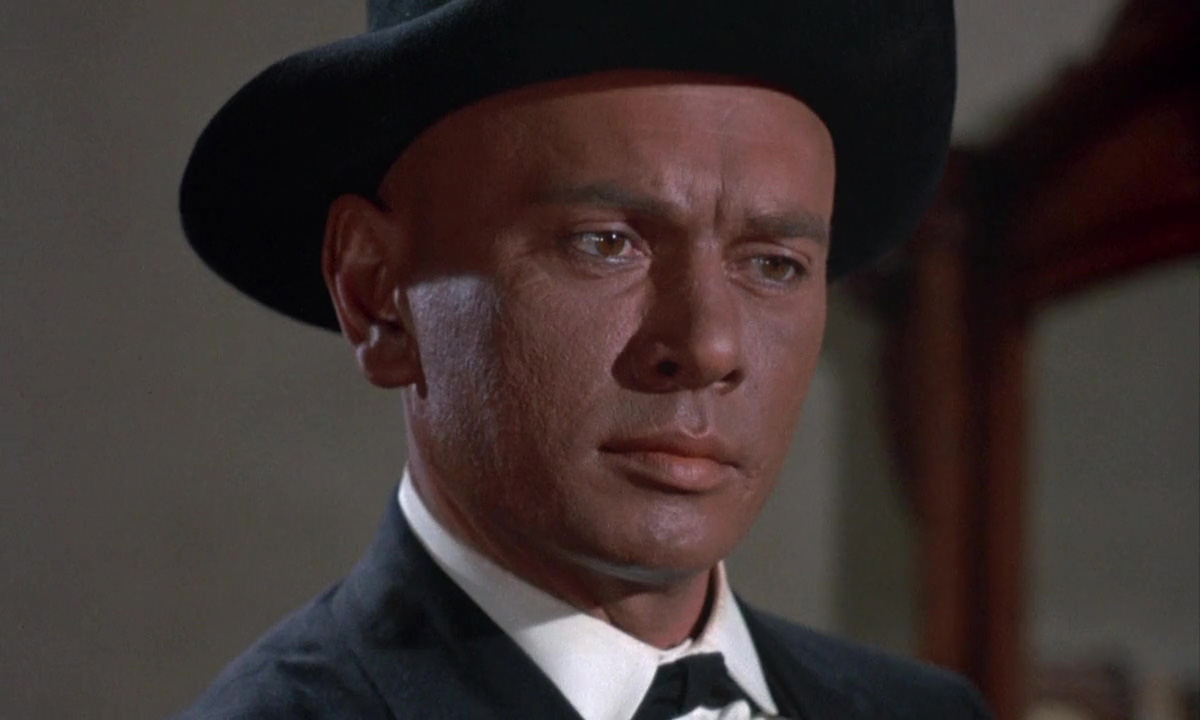 There was also a curious film, which you could hardly call a Western, which Brynner made back with Walter Mirisch, a widescreen color spectacular with the title of Kings of the Sun, directed by Brit J Lee Thompson, which was a rarity, a pre-Columbian tale. Its rather unlikely plot had a Mayan king (George Chakiris) going to Texas in AD 963 and there coming into conflict with an American Indian Chief Black Eagle (Brynner, in a tan and loin cloth). The two vie for the hand of the fair Shirley Anne Field. It is eminently missable.

Villa Rides in 1968 was supposed to have been written and directed by Sam Peckinpah but Brynner didn’t like Peckinpah’s script, Villa being not enough of a good guy, so he engineered Sam’s departure, the screenplay was rewritten by Robert Towne (and not very well), Buzz Kulik was brought in to direct, and as a result the picture turned out pretty bad. Brynner in a wig wasn’t convincing, to say the least. Robert Mitchum co-starred (he rather specialized in gringo-in-Mexico movies) but he didn’t get on well with Brynner. He also remarked that he didn’t know why Charles Bronson was famous. Bronson, reunited from the Seven, played the odious Rodolfo Fierro, Villa’s private executioner. The picture was shot in Spain again. The critics were not kind, justifiably so because it was a lousy movie.

It was back to Spain in 1970 for a real spaghetti western, a Produzioni Europee Associati picture, when Brynner took the role of Sabata in Adiós, Sabata, also known as Indio Black, sai che ti dico: Sei un gran figlio di… Honestly, those Italian titles! Lee Van Cleef had first been Sabata, and would be again, but Italian westerns were happy to exploit names and titles, like Django, producing endless clones and copies, and this time it was Sabata. Amusingly, Van Cleef would repay the compliment by becoming Chris in another Seven sequel. The picture is of slight passing interest because of the weird and wonderful firearms that litter it. Otherwise it’s just another interminable spaghetti western of little discernible merit.

The following year Yul was cast as the lead in a British variant, Catlow, produced by Brit Euan Lloyd and directed by Chicagoan but British resident Sam Wanamaker, and again shot in Spain. Brynner is a rustler, surprisingly bad in fact, in 70s flared jeans and a stupid straw cowgirl hat. There’s a typical early-70s slo-mo love scene with slushy music and some nonsense about Confederate gold. The main trouble, though, with the film is that it can’t make up its mind whether to be a burlesque, a parody or a straight Western.

Brynner had certainly come down in the Western world.

He would only do one more. Fortunately, it was weirdly good. Written and directed by Michael Crichton, the Jurassic Park chap, Westworld (1973) is an entertaining blend of Western and sci-fi, the story of a futuristic theme park in which paying guests can stay in a Wild West town and get involved in shoot-em-ups with robots that look like real Western characters. The chief robot is played by Brynner, again wearing the Magnificent Seven costume he loved. Of course, you know the robots will go badly wrong when a voice on the PA system coos to the incoming tourists, “Nothing can go wrong.”

Brynner is excellently threatening as the implacable, indestructible foe, a sort of future-world Frankenstein’s monster in a cowboy hat. The recent HBO remake was very poor and not a patch on the original.

When you consider that of Brynner’s fairly meager Western output one picture was a weak sequel, another was a shockingly bad Pancho Villa movie and two were low-budget Eurowesterns, you might not want to accord him greatness as an actor in the genre. But as Chris, and as his mechanical alter ego in Westworld, he deserves praise. The 60s and 70s Western would have been poorer without him. 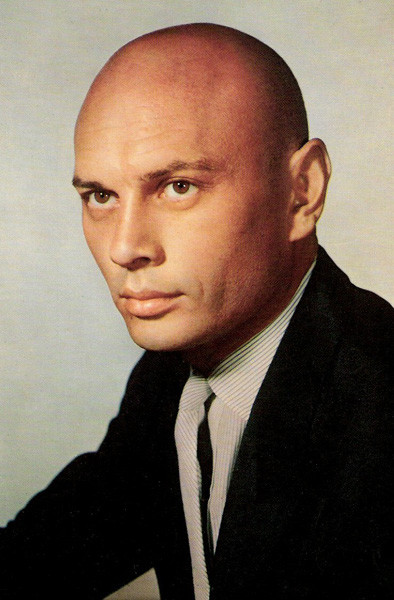