Comanche Station, what Robert Nott in his book The Films of Randolph Scott calls “another short and sweet wonder”, opens with a lone rider at Lone Pine. It’s a classic Budd Boetticher/Randolph Scott image. Randy’s on that fancy blond sorrel of his, Stardust, and we see him on the skyline, towing a pack mule through that thrilling rocky terrain. He’s on a lonesome quest, of course. He’s not a bounty hunter this time, or an ex-lawman on a revenge mission. He’s going from Comanche camp to Comanche camp to try to find and rescue his abducted wife.

This is a classic Western idea. The ‘captivity narrative’ went right back to Fenimore Cooper and probably further. The notion of a woman held by savages was a deeply shocking one, and nothing could be nobler for the white hero to do than rescue her. John Ford had used the idea in The Searchers (1956) and would do it again shortly in Two Rode Together (1961). The tale of Cynthia Ann Parker, in particular, Quanah Parker’s mother, was a powerful one. 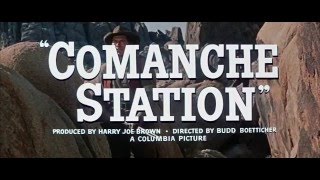 This would be Scott’s last portrayal of the single-minded steely stoic (in Ride the High Country he would be more of a likeable scoundrel). And he did it, as he always did, wonderfully well. Over 60 but looking about 45 (he always kept himself in shape) he had that craggy-faced authority that thirty years of Westerns bestowed on him. He doesn’t talk much and never seeks the limelight but when he does speak, in that mannered drawl of his, his words count. And you better listen.

When in the summer of 1959 the tried-and-tested team assembled to make Comanche Station, they hadn’t planned it as the last in the series. Writer Burt Kennedy had another project on the go – what would become Six Black Horses, a Universal picture with Audie Murphy (1962). But Scott had had enough. He was increasingly deaf – probably all those years of movie gunfire had taken their toll. Co-star Nancy Gates said she had to speak her cue lines to him more loudly.

The new Columbia management team (studio boss Harry Cohn having died in ’58) was more dubious about Westerns and for some reason had a down on Scott’s partner, producer Harry Joe Brown. Randy didn’t need the money (he was already a very wealthy man), and anyway these pictures were hardly turning a profit. It was time to call it a day. And as we know, Boetticher was about to commit career suicide by going to Mexico with his new wife Debra Paget (the Karen Steele affair having cooled) to make a film about his bullfighting hero. So Comanche Station would be the last of the cycle.

But they went out on a high.

In some ways, the movie is low-key. I don’t just mean low-budget or with a small cast, though that was true too. I mean that from a pure Western action point of view, not that much happens. There are a couple of short Comanche attacks and a last-reel shoot-out with the principal villain in the rocks (even that isn’t played up) but that’s about all. It’s a huge credit to Boetticher as director, Kennedy as writer and the very high quality cast that you can’t turn your eyes away at any point. You are glued to the screen. Nott says, “It was probably Boetticher’s best directorial effort.”

This time Scott is Jefferson Cody (I don’t think you could ask for a more American name than that) and he falls in with some Comanches who have a white woman as captive – though it’s not his wife. He trades for her anyway – $5 worth of goods and a Winchester rifle. She is played by Nancy Gates. Ms Gates was a fine actress (I hope it’s not unkind to say that in this respect she was a great improvement on Karen Steele). She did a handful of Westerns, two with Joel McCrea, but hadn’t worked with Randy before. Comanche Station would be her last too. Of course, it being Boetticher and Kennedy, the woman is an object of desire – she is twice shown wet, with clothes clinging to her shape. But in this one she is also a strong character and a tough frontier woman who can hold her own in the West. They had done something similar with Steele’s feisty Mrs Lane in Ride Lonesome, but it’s played up even more here. Actually, I think this may be the best woman of all the seven movies. I don’t know where in the Comanche camp she found that bright red lipstick, though.

The rescuer and rescuee arrive at a stage way-station (hence the movie’s title) and there fall in with, yes, you guessed, a charismatic bad guy and his henchmen (as you know, good guys have sidekicks and bad ones have henchmen). This time third-billed Claude Akins does the honors – and honors they are. He is splendid. In fact I think it was his best ever Western role. Cody and he ‘go back’: they were in the war together, and it didn’t go well. “Had my way, they’d-a hung yer,” Cody tells him. Akins is utterly ruthless. Knowing that the rescued woman’s husband has offered $5000 for the return of his wife – even if she is deceased – Akins is perfectly ready to murder both Scott and Gates to get that money. He even shocks his men.

These are, billed fourth and fifth, Skip Homeier again (back from The Tall T) as Frank and Richard Rust as Dobie. Both are excellent. They are not just thugs. They are thinking beings, with doubts and dreams. Their conversation at camp is very well handled. As with all Boetticher bad guys, there is something almost sympathetic about this trio of villains – Akins especially, as he smiles and chaffs. Kennedy actually gives more lines to the bad guys this time, and their characters therefore emerge more starkly.

Names: Gates plays Mrs Lowe while Akins is Mr Lane. Hondo-lovers will recognize those. In fact Kennedy would take that name Ben Lane and use it for the hero of Six Black Horses. Well, you gotta recycle. Although Lane is ready to kill her for the money, he’s still attracted to her. He doesn’t get why her husband didn’t search for her. “Were you mine,” he tells her, “I’d come lookin’ to find you, even if I had to die in the doin’.”

A dying man tells them the stage to Lordsburg (they all call it Lords) isn’t coming. The Comanches have got it. So the party sets off on horseback. At first we have Scott and Akins, then the henchmen, then the mules and, last, Mrs Lowe. But as the journey goes on, we see that the lady has progressed. She is now ahead of not only the pack animals but even the henchmen. Progress!

As the characters move along, the similarities with Ride Lonesome are striking. We have a quintet, four men and a woman, dubiously united (she now believes that Cody only saved her from the Comanches for the reward), forced to coalesce in the face of an external threat. Of course, the tension mounts.

The score was by Mischa Bakaleinikoff this time, and it’s very good. There are none of the ‘chirpy’ tones that David Buttolph gave to Westbound. Here we have ‘dark’-sounding, slower music. The ‘happiest’ it ever gets is when they are camped by a river in beautiful country and it becomes almost pastoral. But that doesn’t last as one of the party perishes.

There is the odd semi-comic moment, such as when Cody throws Mrs Lowe into a horse drinking trough to protect her from Comanche attack, or when a jackass lineament is applied to Cody’s hurt leg. But these moments are rare, and only a slight leavening. Most of the atmosphere is grim menace.

Having Lane courageously save Cody from the Comanches was a masterstroke, I think. It humanizes the bad man. Maybe, we think, Cody is too implacable and maybe Lane is not as wicked as we thought.

Sadly, the stuntmen are not credited but the stunts are pretty damn good. Too many horse falls, though, again. I hate that.

It all leads to a shoot-out in the rocks, Winchester ’73-style, though done more discreetly.

We finally see why Mr Lowe didn’t come looking for his captured wife. And we get a last look at Randy, riding lonesome on that skyline, wonderfully photographed again by Charles Lawton Jr, as the indomitable man sets off once more to find his own wife, on a probably doomed quest. Actually, the closing scene is the exact same shot as the opening scene, just printed in reverse (left to right).

This is an absolutely splendid Western. In fact it’s one of the best the 1950s (for it was a 50s Western) had to offer. Spare, even austere, it was the oater in its purest form. As one of the special features on the DVD Clint Eastwood in an interview says it was his favorite. I get that.

That concludes our look at Boetticher, Kennedy and the wonderful cycle of late-1950s Randolph Scott Westerns. Next time, on to other things!