It doesn’t do it for me

In our last post we were looking at the career of the outlaws Butch Cassidy and the Sundance Kid (click the link for that), both in reality and on the screen. Certainly the most famous celluloid Butch and Sundance were Paul Newman and Robert Redford, and today we’ll look at ‘the’ movie on the subject, from 1969. 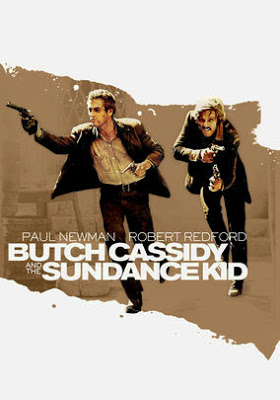 ‘The Sundance Kid and Butch Cassidy’, as it was originally to be called, makes an enjoyable story with, as Katharine Ross said, “A beginning, a middle and an end.” It is one of the most popular Western movies of all time, it won four Oscars, and despite an iffy initial critical reception (national reviews were “mixed to terrible”, screenwriter William Goldman recalled) it went on to become a huge hit. The picture became the number one movie in the United States and Canada for two weeks and earned $15m in theatrical rentals in the United States and Canada by the end of 1969. It went on to a final US gross of $100m. That’s because it is fun, amusing and there is a chemistry between its two stars, Newman and Redford (the latter replacing first choice Warren Beatty), that is hard to beat.

The Rotten Tomatoes critical consensus says, “With its iconic pairing of Paul Newman and Robert Redford, jaunty screenplay and Burt Bacharach score, Butch Cassidy and the Sundance Kid has gone down as among the defining moments in late-’60s American cinema.”

Frequent sepia-tinged sequences, what appears to be an old silent flicker, and still photographs all try to give a nostalgic and faux-historical tinge to the picture but of course it bears little resemblance to the true story of Robert Leroy Parker and Harry Alonzo Longabaugh (the real names of the heroes). That alone is no impediment to a good Western. Westerns are rarely if ever historically accurate, and they are not supposed to be documentaries but entertainments. The picture was beautifully shot by Conrad L Hall in Mexico, New Mexico, Utah and around Durango in Colorado, and it is directed by George Roy Hill. The stars are handsome and charismatic. The dialogue is full of wit and (anachronistic) humor – TIME magazine said the dialogue “could have been lifted from a Batman and Robin episode.”

But. And it’s a big but. This is not a Western fan’s Western. It is an amusing commercial vehicle and a big ‘buddy’ movie. But it’s overly ironic and even perhaps mocking of the genre. Call it gently revisionist if you will; I call it disrespectful.

Probably the worst thing about the film, and bad enough almost to ruin it on its own, is the ghastly 60s ‘jokey’ Burt Bacharach music, and when we come to the totally dire bicycle/Raindrops sequence, the film (still in its first reel) almost dies there. It is rare for a single moment or performance to sink a movie utterly but it can be done. Brian Keith sank The Rare Breed pretty well single-handed in his wig and ‘Scottish’ accent, and Bacharach does it here. The music is toe-curlingly awful, throughout. Of course this is a subjective judgment. Many people love it. And Bacharach won a Grammy for it, after all.

But I think, for me, the underlying reason for the failure of this picture as a Western was not the music but the lack of love or respect for the genre by writer Goldman, a Princeton academic at the time whose first screenplay this was. He says, in an interview on the DVD, that it is hard to balance drama with humor successfully. It is indeed, Mr Goldman, and you certainly didn’t manage it. The director also made no other Westerns and is known for such works as Thoroughly Modern Millie and The Sting. He should have stuck to that genre. The BFI Companion to the Western says, “Much of the film veers from the chic to the merely slick.”

Writer and director do use, probably deliberately, many Western tropes, not to say clichés: a train robbery with bandits running along the top of the cars, escape by jumping into water, the (impossible) galloping exit of the posse from the railroad car, that kind of thing.

And the ‘end of the West’ theme is strong, as in so many true Westerns, especially from the 1960s on. It’s nostalgic and describes characters feeling out of place in a world that is over (in some ways, of course, a world that never existed or if it did exist, it only lasted thirty years or so in a limited part of America). So superficially we feel ‘at home’, we recognize the scenery.

Girlfriend Etta Place (Katharine Ross) is a schoolteacher in the movie, that archetypal goody female of the Western ever since The Virginian in 1902. In reality Place was probably a prostitute but that was a step too far even in the late 1960s. Little is factually known about her – even her name is unsure. Etta may have been a Spanish-language version of Ethel. In the one instance where she is known to have signed her name, she did so as “Mrs. Ethel Place”. We don’t know when she was born or when she died. This is handy for film makers, of course, because they can create any back-story and character they want. Ms Ross does well, though doesn’t have all that much to do – as Newman said, the film is essentially a love affair between the two men. For me Ross will always be Elaine in The Graduate but Westernwise she was one of James Stewart’s brood in Shenandoah, and was Lola in Tell Them Willie Boy is Here later the same year (with Redford again).

At least Sam Elliott is a card player, so that’s one good thing.

The heroes leave ‘the West’ and go off to Bolivia, just as other Western characters went to California or Mexico – a new West, a further frontier. There is even, bizarrely, a comparison to be made with a true Western that came out the same year, The Wild Bunch – not only that The Wild Bunch was the name of Butch Cassidy’s gang, I mean: cowboys leave the United States and do not find the new frontier that they hoped for and die there. Both films were in a way deconstructions of themselves, or anyway of the genre. Both are arguably ‘Vietnam’ films, as ‘superior’ Americans go to foreign parts and shoot the natives (though, agonizingly for ‘superior’ Americans, fail in the end).

But it sticks in the craw, really, to compare Butch Cassidy with The Wild Bunch. In some ways they were complete opposites. The latter was a true (late) example of the genre with great, aging Western actors and a director/mastermind who loved the Western and was experienced in it. It doesn’t slyly mock itself or the genre. Butch Cassidy may well be, as I said at the beginning, an amusing, romantic buddy picture much loved by non-Western fans and often seen on TV by millions of people, and good luck to them, chacun à son goût, but as Herb Fagen in The Encyclopedia of the Western says, “purists might argue that it is not a western in the true sense of the term.” To us, e-pards, to true Western buffs, to real oater fans, it has a whiff of bad eggs about it.

Even without the bloody bicycle sequence.

PrevPreviousButch Cassidy and the Sundance Kid in fact and on the screen
NextBlackthorn (Magnolia Pictures, 2011)Next

PrevPreviousButch Cassidy and the Sundance Kid in fact and on the screen
NextBlackthorn (Magnolia Pictures, 2011)Next
Jeff Arnold © 2023 – All rights reserved – Designed by BetterCallChris
Scroll Up